There’s something pretty special about going on holiday to a british seaside resort.  It not only brings back serious childhood memories, but the kids seem to love them just as much as we did back in the day!  The smell of the sea air, sandy toes and yes – the arcades(!) seem to draw the kids in…and quickly!  This is where Coral Island comes in…

We decided to take a mini break to Blackpool during May half term.  We’ve already visited Blackpool twice since Mr B was born and I really love it there and there is so much to do as a family!  We booked the Big Blue Hotel, located next to Pleasure Beach Theme Park and spend three wonderful days exploring the delights of Blackpool.

Kids love arcades – 2p machines, grabbers, ride on’s.  You name it – they want to do it!  Blackpool is full of many arcades but nowhere can beat Coral Island.  Located near the Central Pier and a stone throw away from Blackpool Tower, Coral Island is an arcade heaven!  Despite this being our third trip to Blackpool, we had yet to visit this bright Pirate haven, Unfortunately, we’ve just never had enough time on our agenda.  This time, we did! 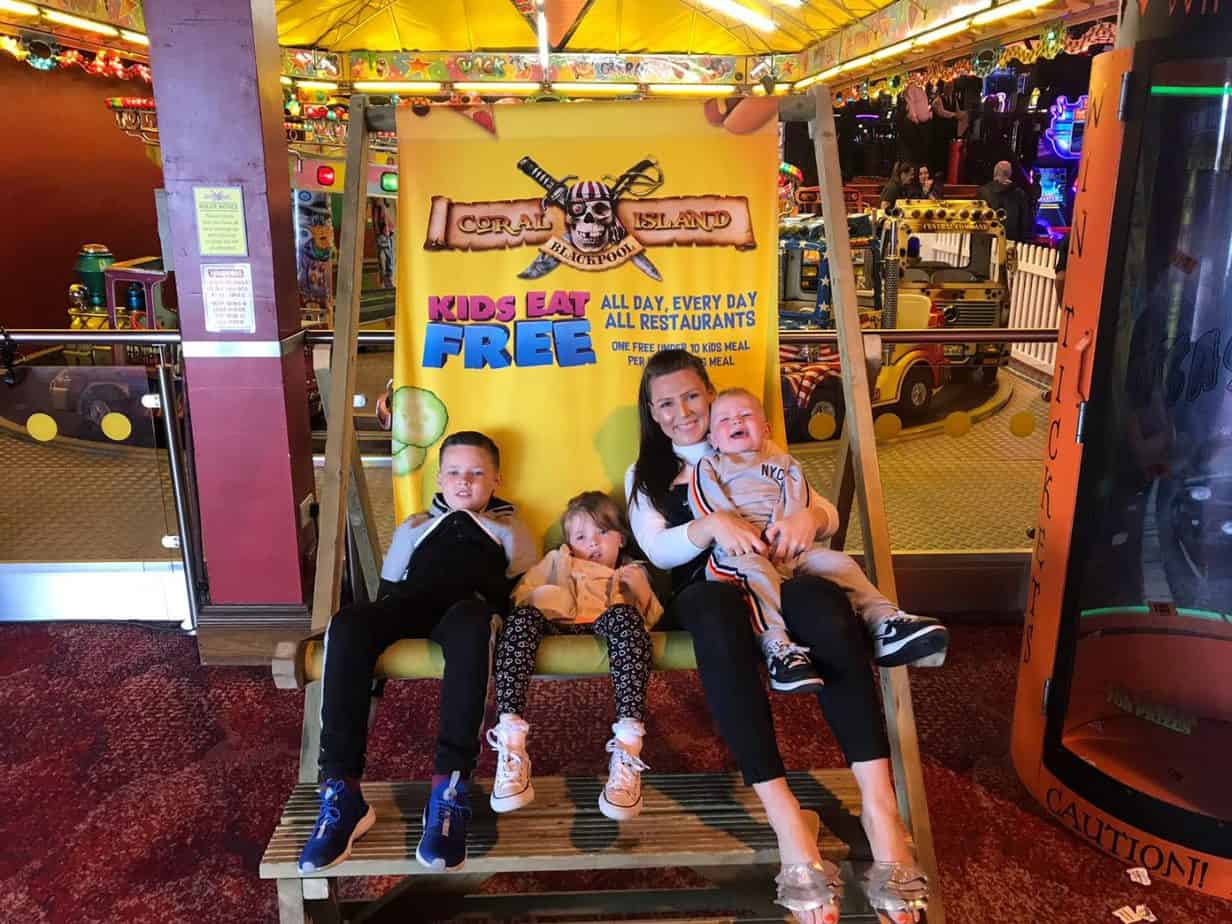 Coral Island is Blackpool’s largest free admission indoor family attraction.  From the outside, you cannot miss it.  Set right on the promenade, you are greeted with a huge Skull, adored with pirates, treasure and sea creatures.  It looks pretty impressive! 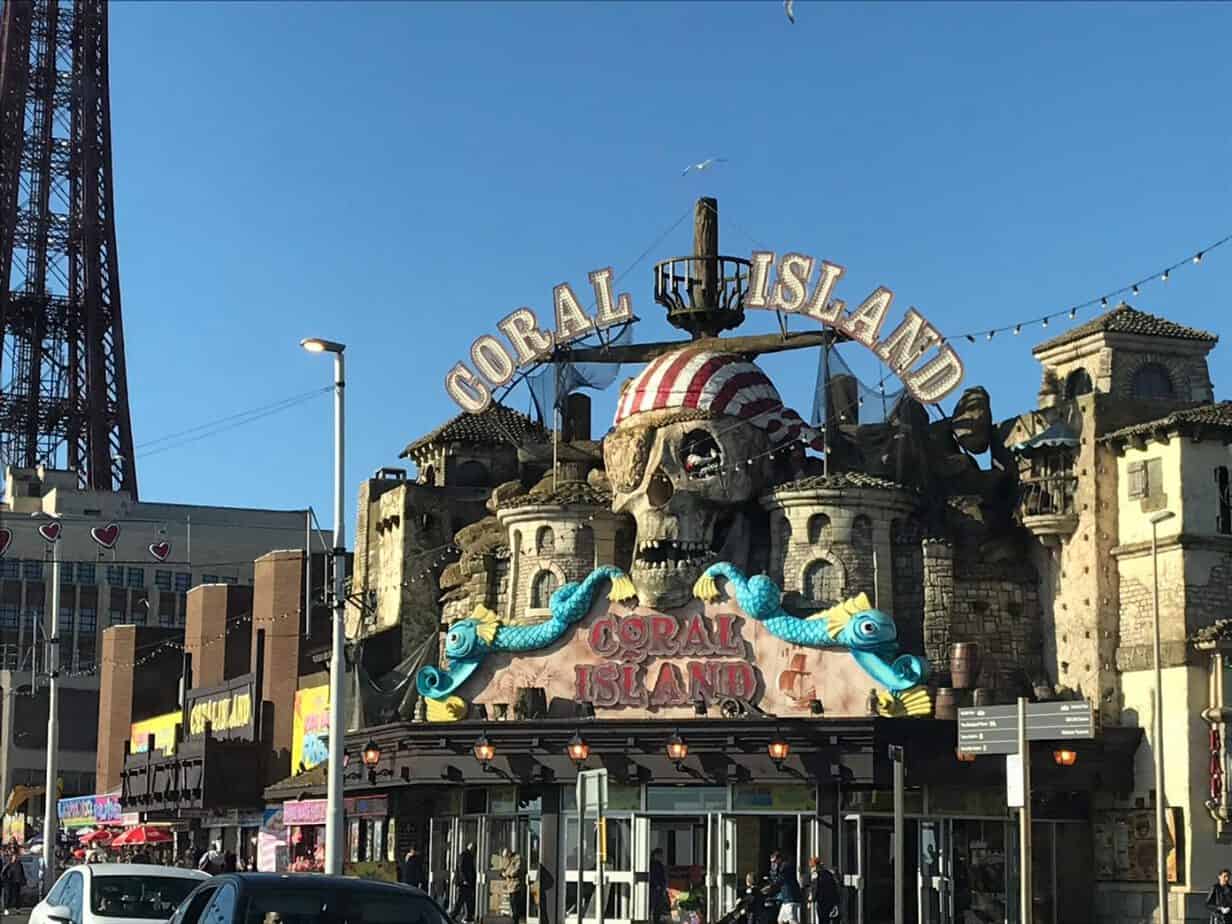 What does Coral Island have to offer?

Inside is just as immersive and the theming is top-notch! My kids have a thing about pirates.  I am pretty sure it stems from our many trips to Disneyland Paris and the continuous rides on Pirates of The Caribbean.  They were instantly wowed by this place that not only had some much to offer, but it was like stepping into a pirates adventure!

From the moment we walked in we were transformed into a whirlwind of games, coin machines, ride ons and interactive entertainment.  Where do we begin?!  2p machines!  The kids love there – so simple but yet when the money drops into their silver tray, there really is a sense of excitement and fascination!  2p and 10p machines were scattered across Coral Island so there is a huge choice.   We had a lot of fun on these machines which also offered tickets when you managed to earn 2’ps.  You can then redeem these tickets at the prize shop. 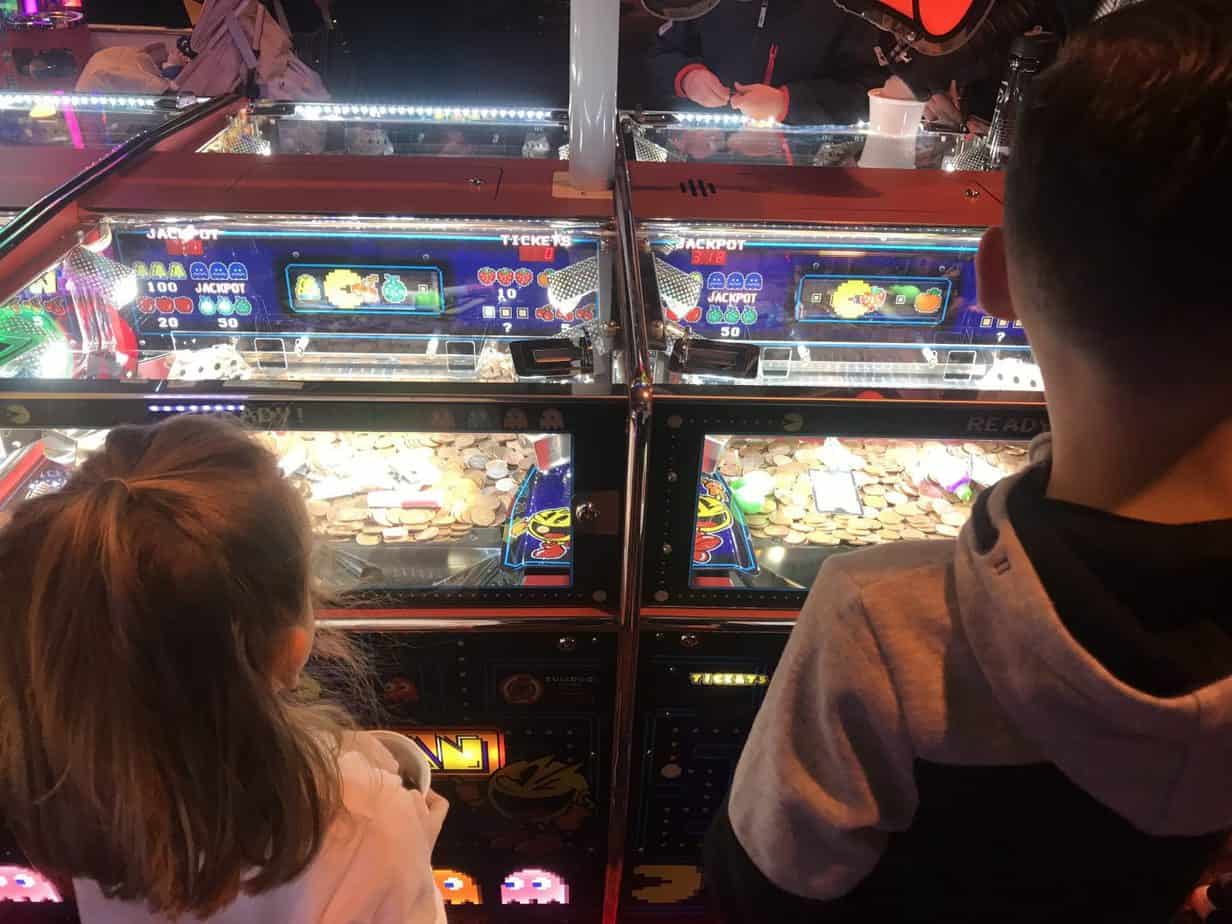 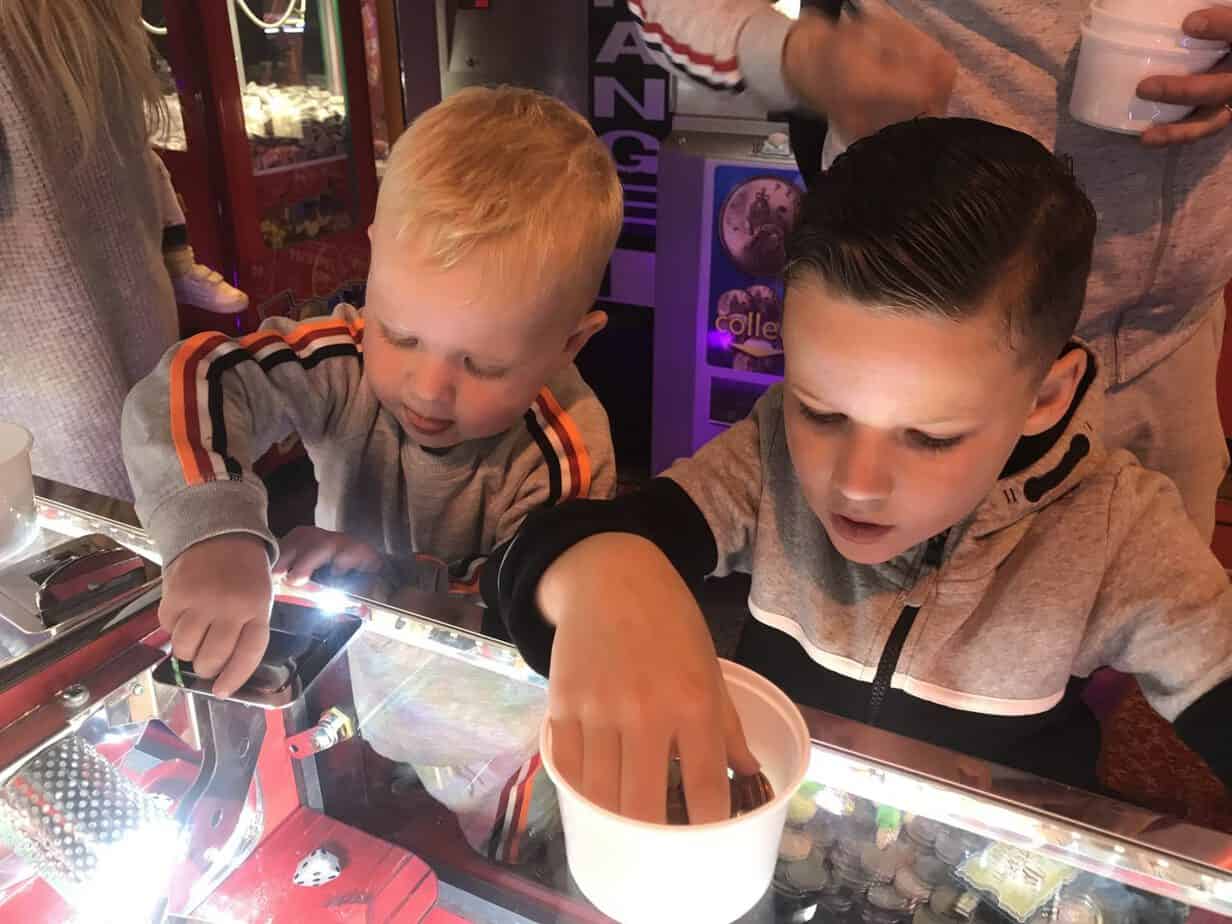 There is also a large over 18’s agree dedicated to the real gamblers.  It is clearly signposted and has it’s own separate area, so it really doesn’t interfere with the children playing. 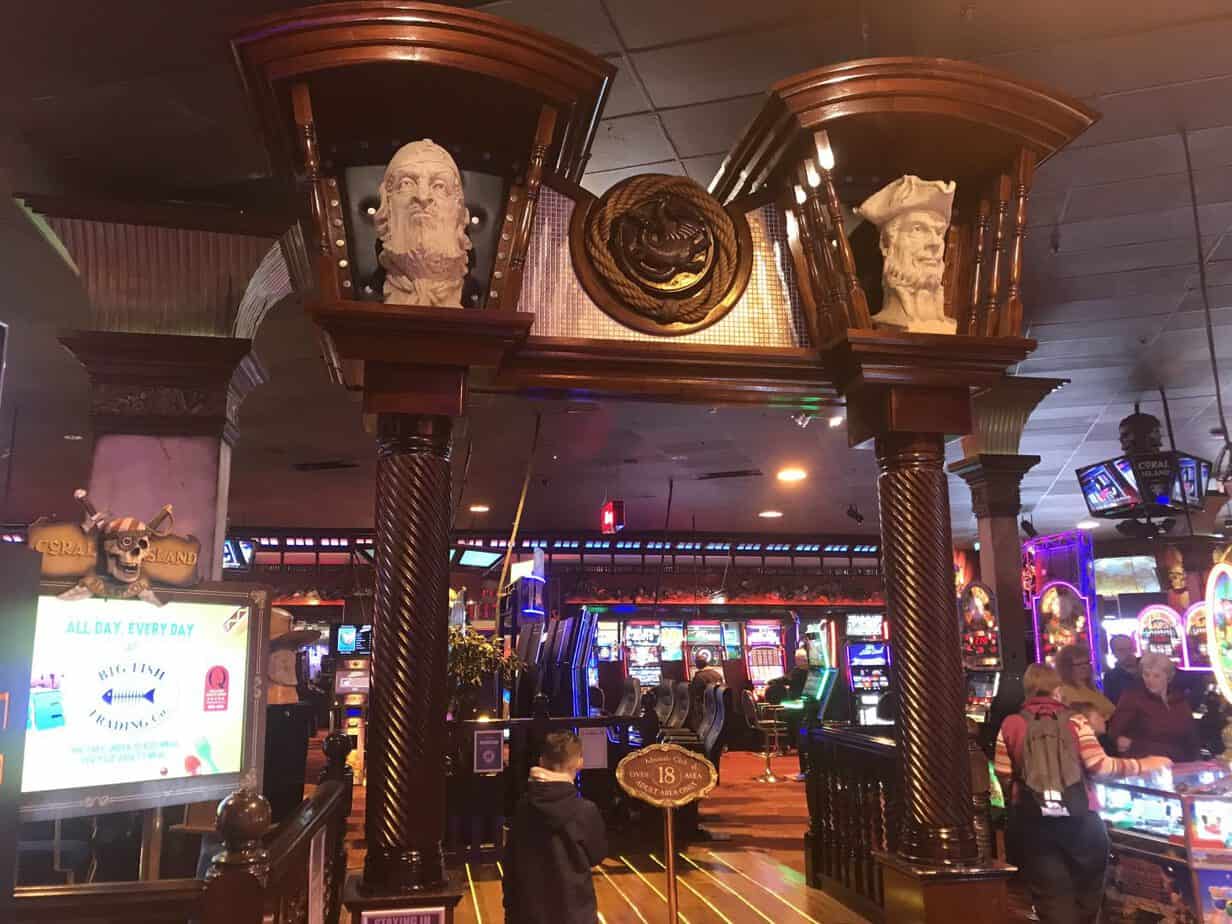 There are two rides located inside Coral Island.  The first ride is Pirate Flyer, and this was our next stop after spending sometime on the machines.  To ride, you simply use the ticketing machine located prior to entering the ride to pay for your ride tickets.  It costs £2 per ride or £3 for two rides (prices for 2019) 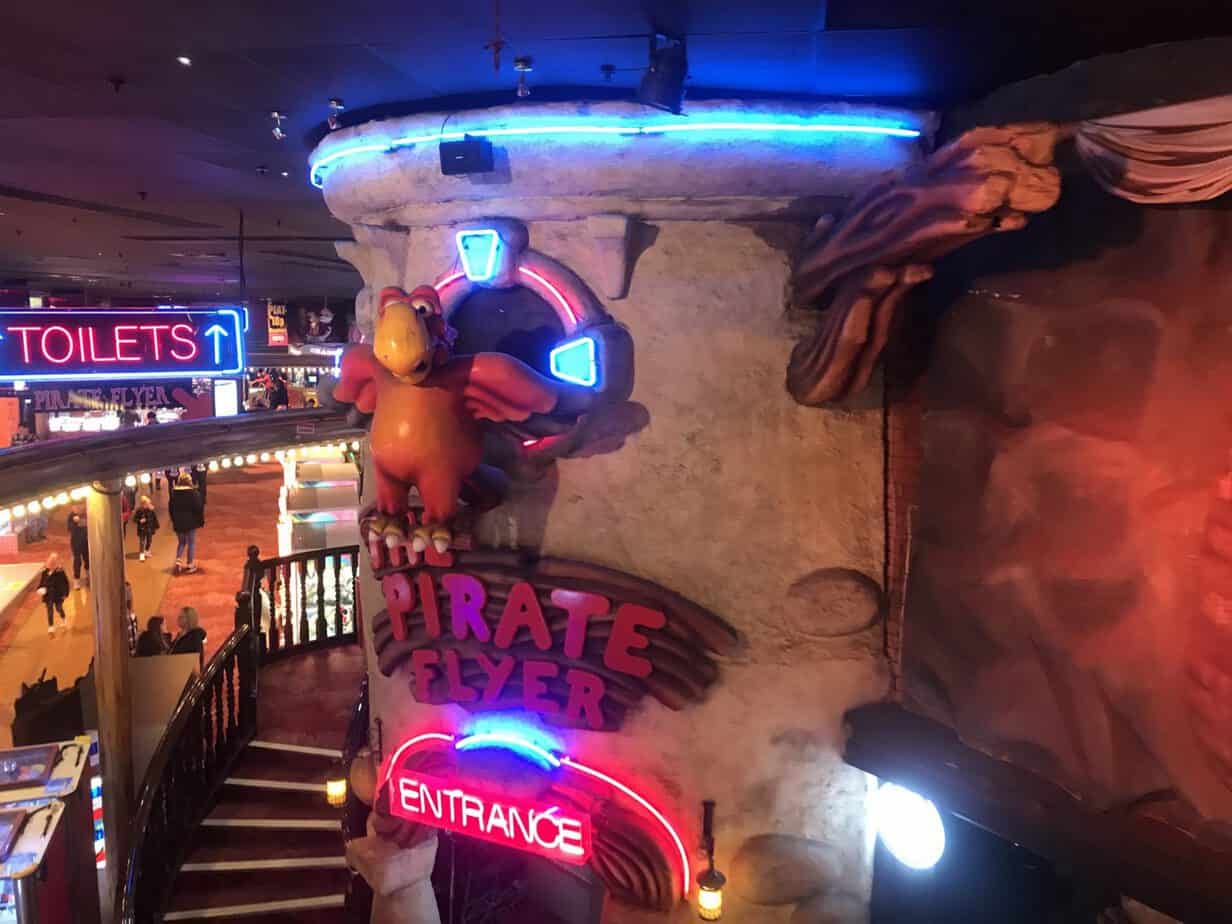 The Pirate Flyer takes you for a ride over the flashing lights of the arcade below in your very own Galleon.  It’s only a short ride and is gentle and suitable for all ages.  Each galleon seats up to four riders and my kids loved it, especially Missy and Baby K! 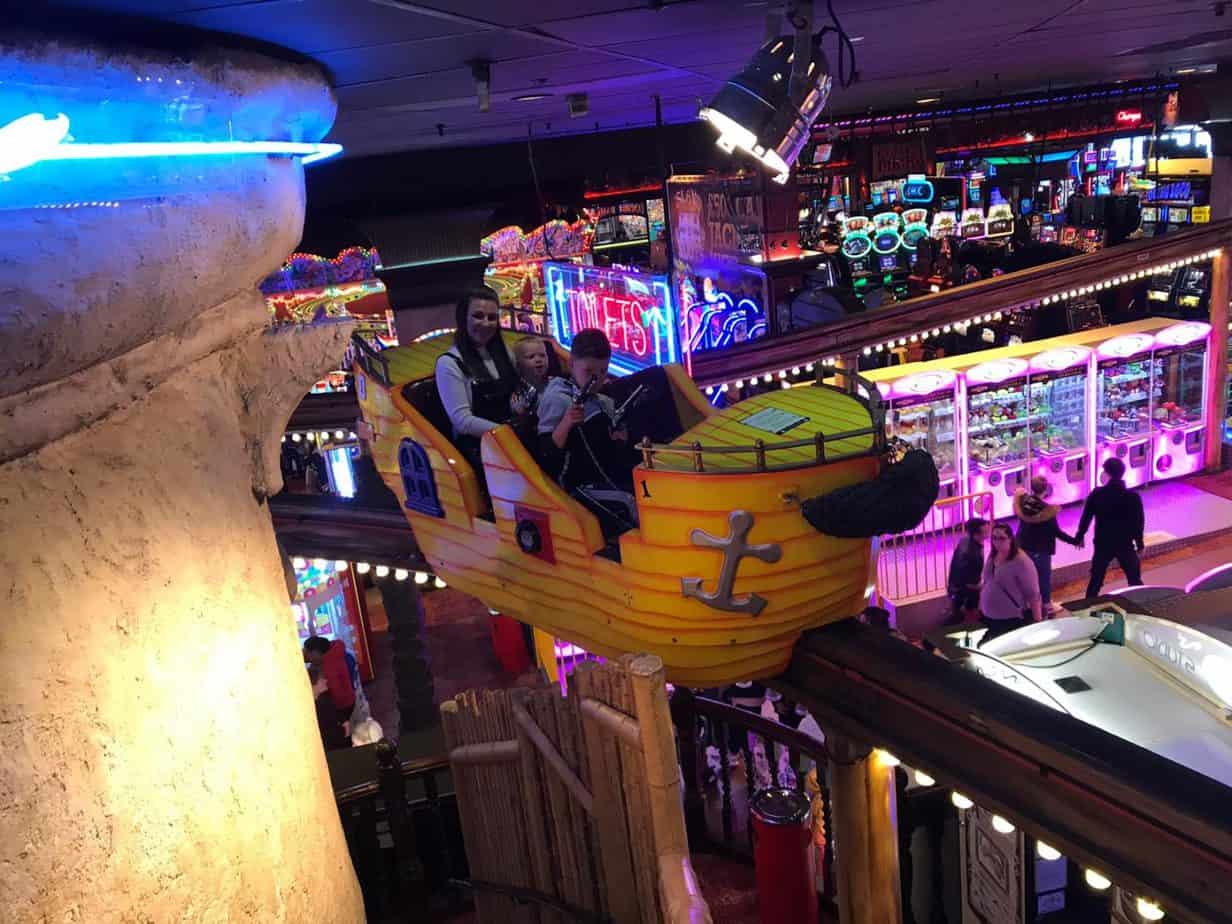 There is also a Ghost Train at Coral Island.  I was a bit dubious about this ride as the youngest two are still little.  But we went for it…and it was pretty scary!  Both Missy and Baby K cried as soon as we left the cart despite me covering up both their eyes.  Mr B thought it was ok so I would recommend this ride to really be for over 6.  Or if your kids are into scary rides, then go for it! 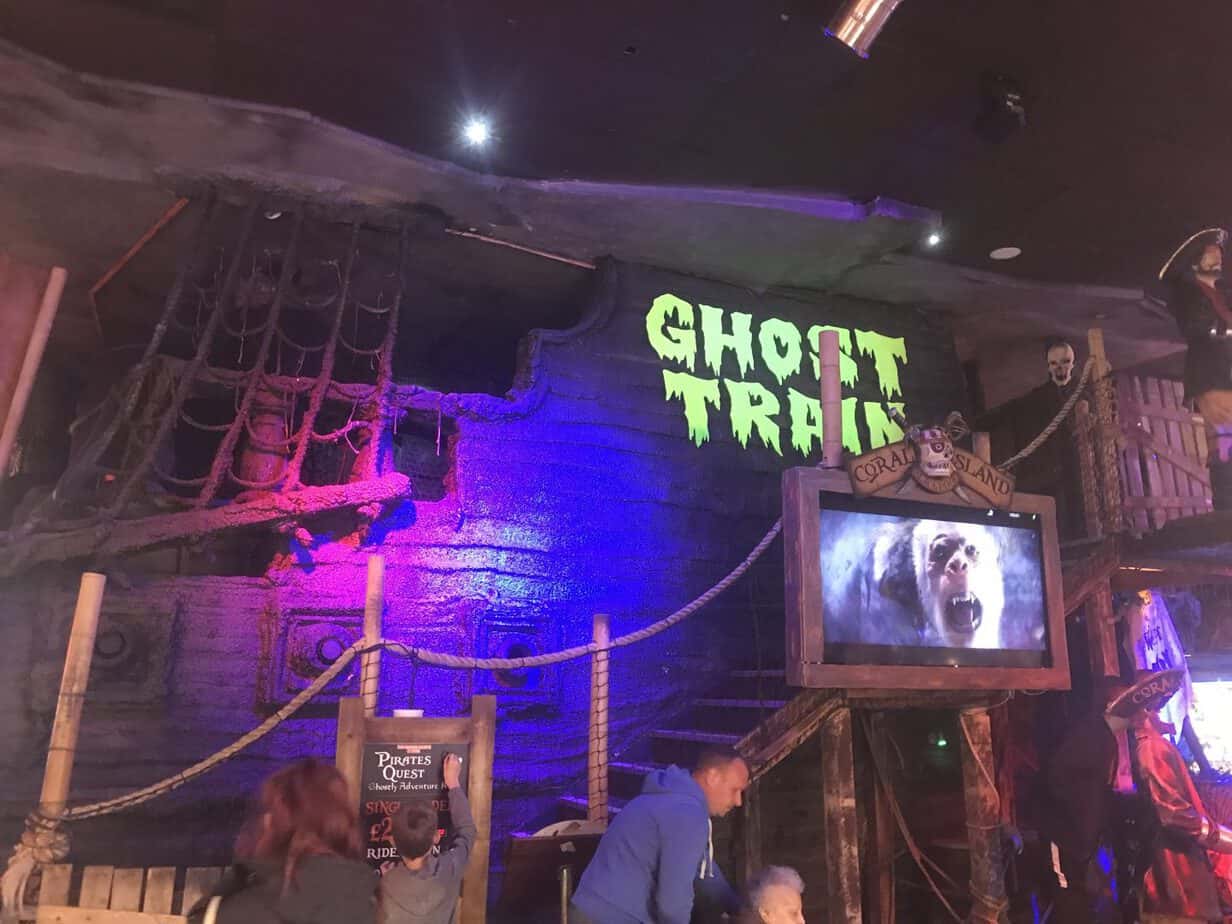 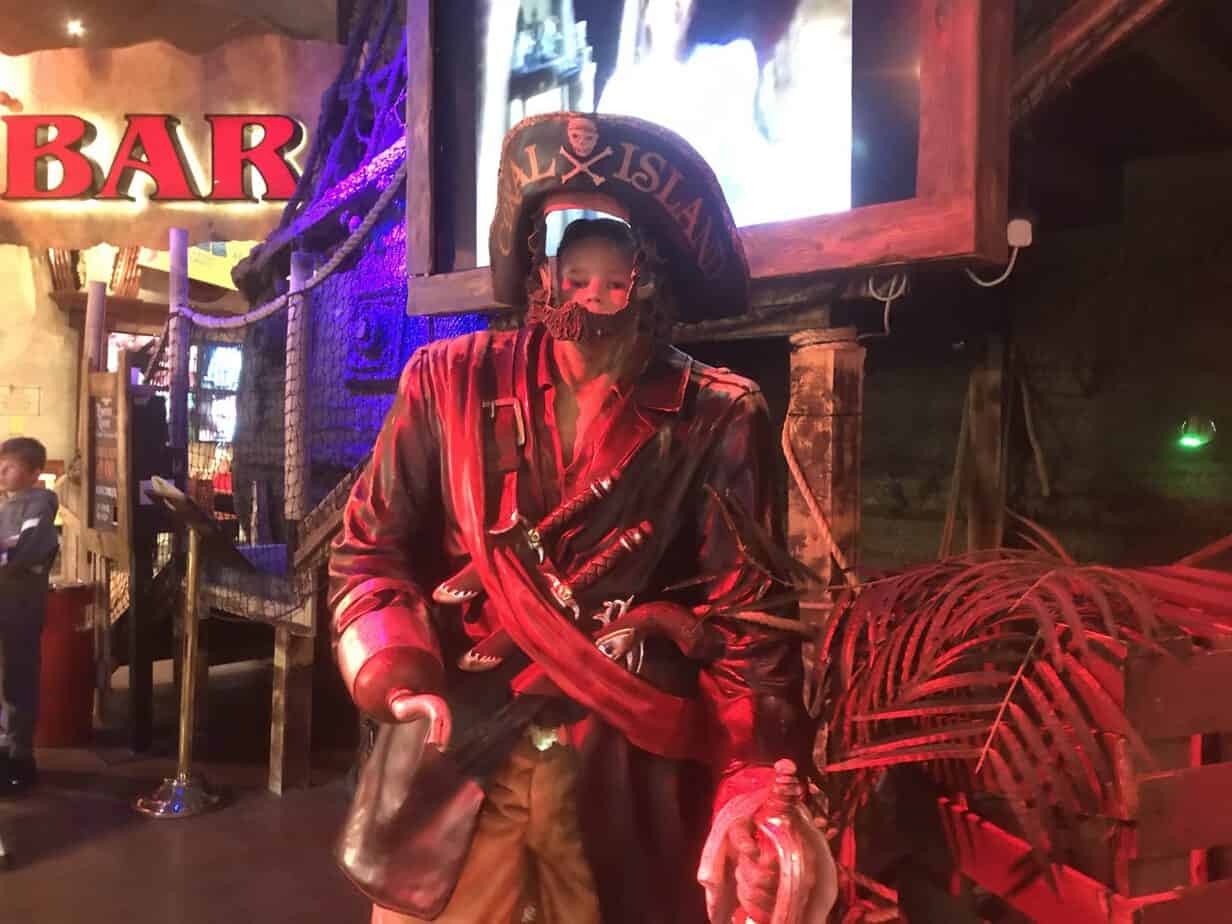 This was my favourite game as a child – the Camel Derby!  If you are not familiar with the game, you each take a seat in front of a station where you have a few balls.  Throw them up the ramp and into a hole to move your camel (or horse) along the track.  The further away the drop hole, the further along your camel will move to the finish line.  This game was very busy and we had to wait to have 3 or 4 seats in a row – it’s so popular as it is so much fun!  The kids were lucky enough to each win a prize too – bonus! 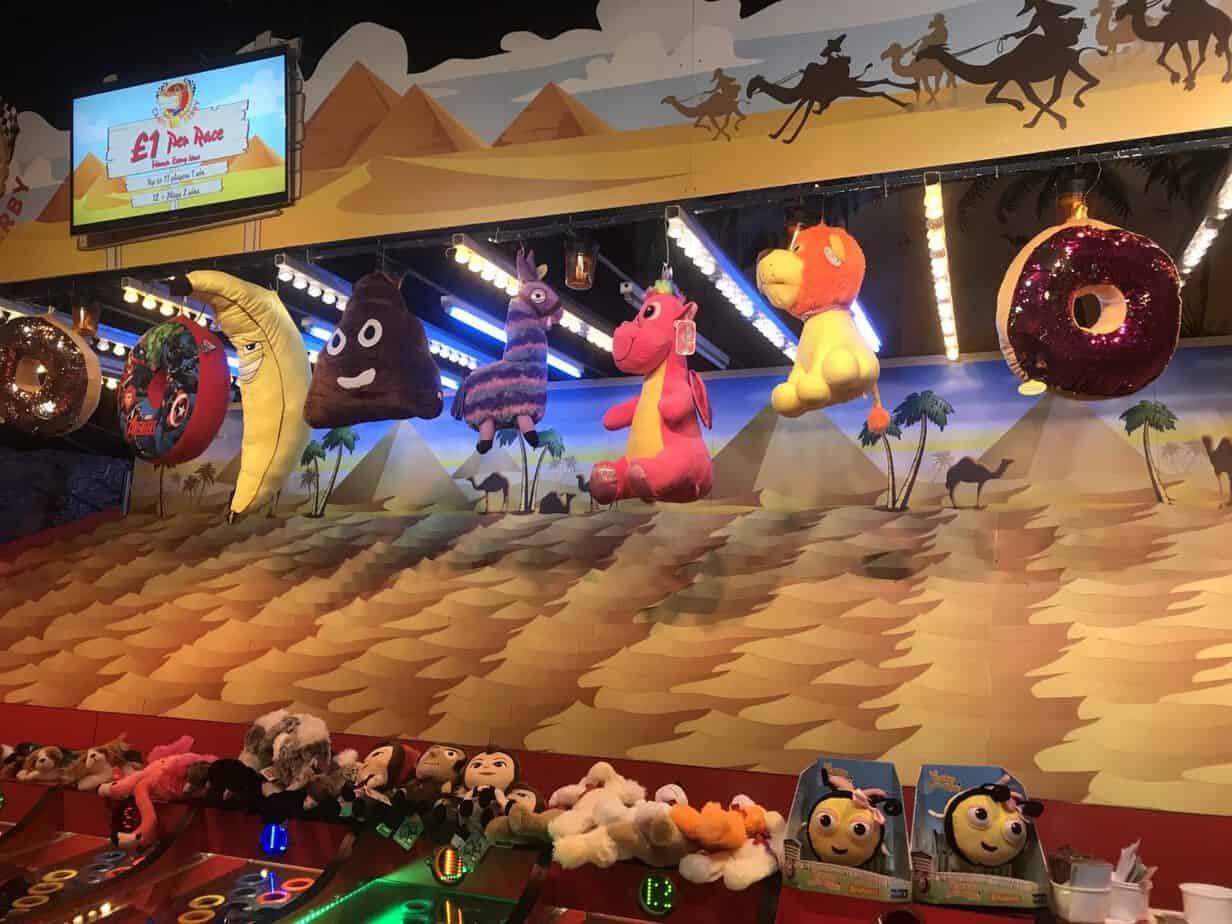 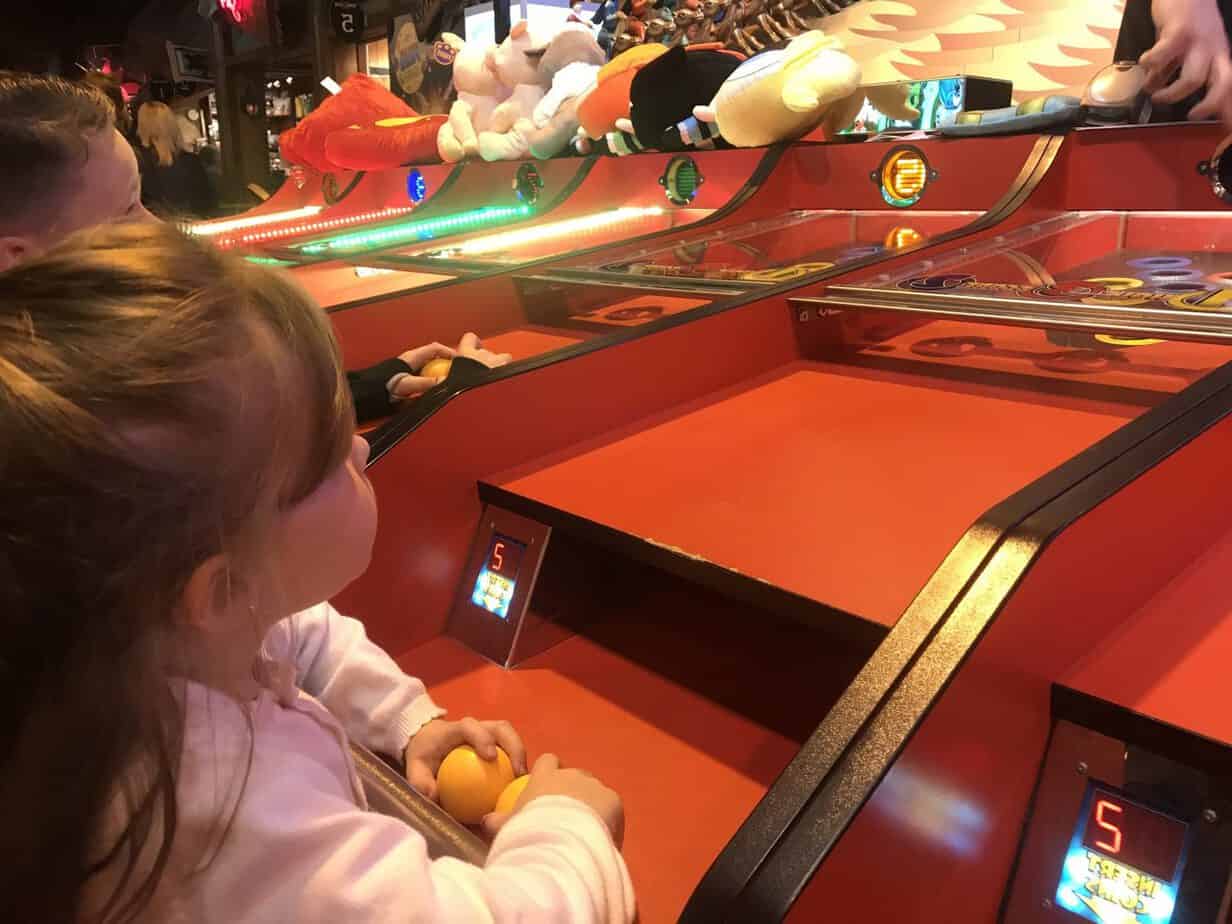 Other Games at Coral Island Blackpool

Aside from Camel Derby, there is also a huge array of other games available.  Mini bowling, basketball and a vast amount of car racing games, which pleased my boys to no end!  There really is something suitable for all age groups including adults.  It really reminded me of Dave and Busters which is no longer located in the UK anymore.  We had one in our home town and were so disappointed when it closed down. 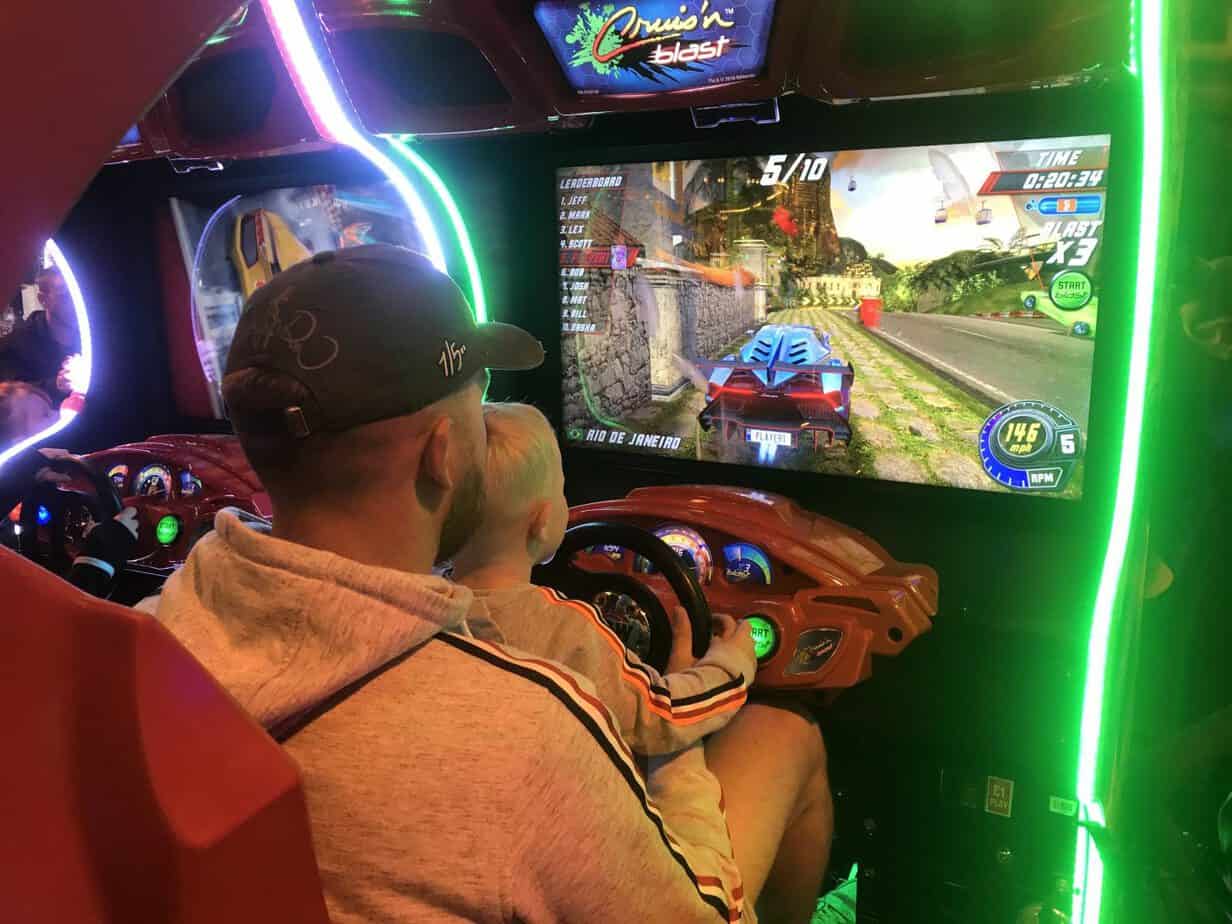 There is also the ever so popular motor ride track which Missy enjoyed, and the popular VR game!  Mr B looked anything virtual reality so this was right up his street!  This is great for adults too, and also fully to watch! 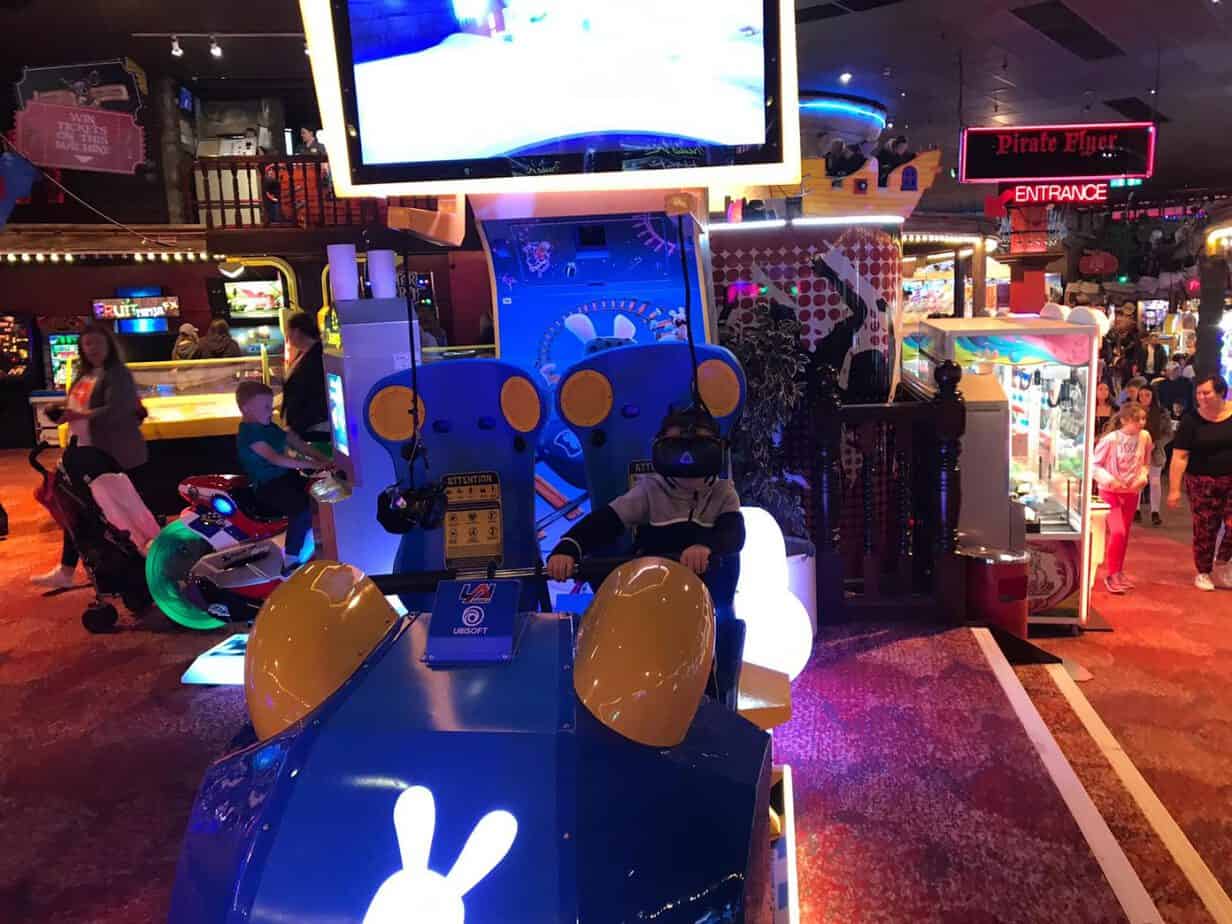 Ah, I love a game of bingo!  And bingo is a popular game in the town of Blackpool!   This is an interactive bingo hall just located to the side of the over 18’s section and is suitable for all the family.  You can even win prizes!  Each of us took a gaming station and off we went.  It was pretty simple and very easy for the children to use as it was computerised, which maybe takes the authenticness  out of the game a little.  But the thrill of winning was still ever so present and the Mr B even won a line!  We left the family bingo hall with some prizes too, which pleased the kids! 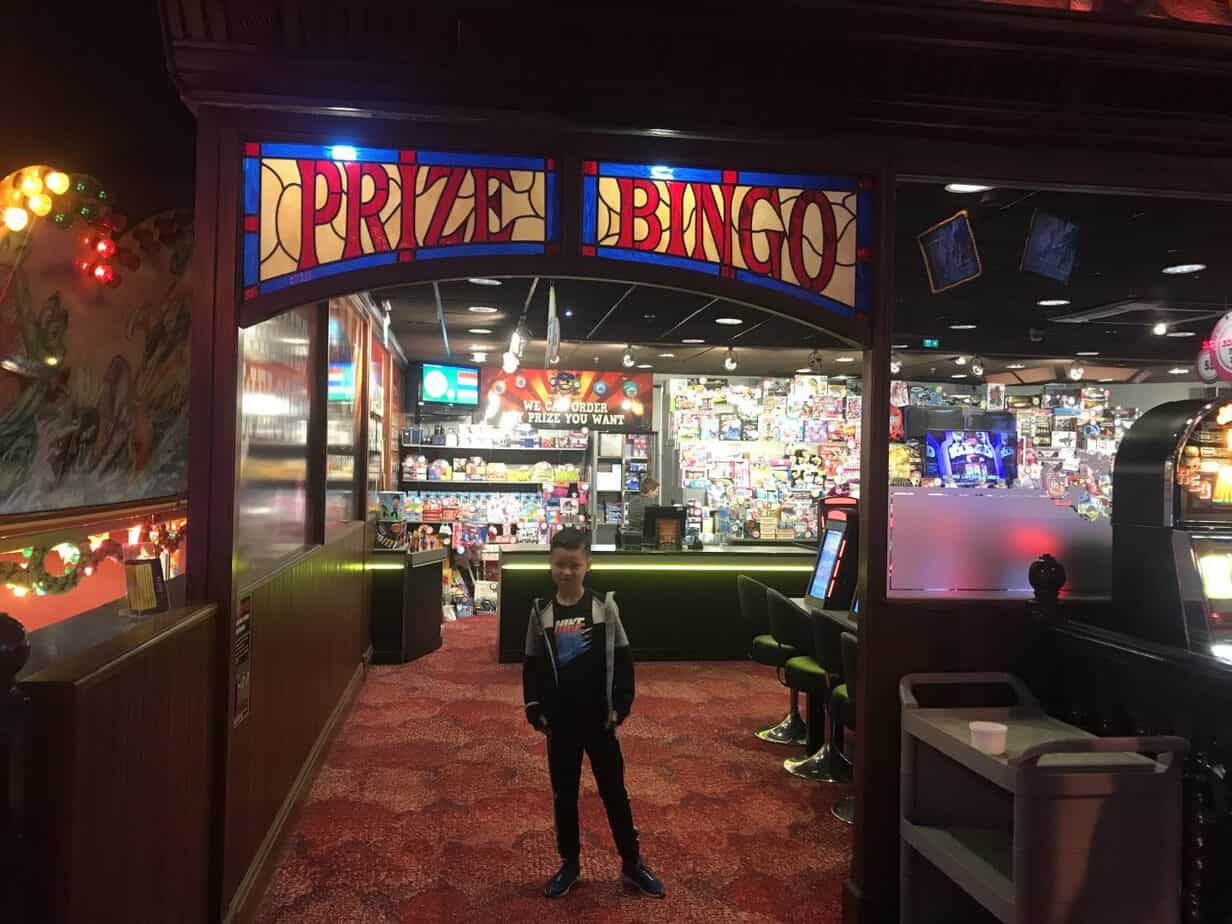 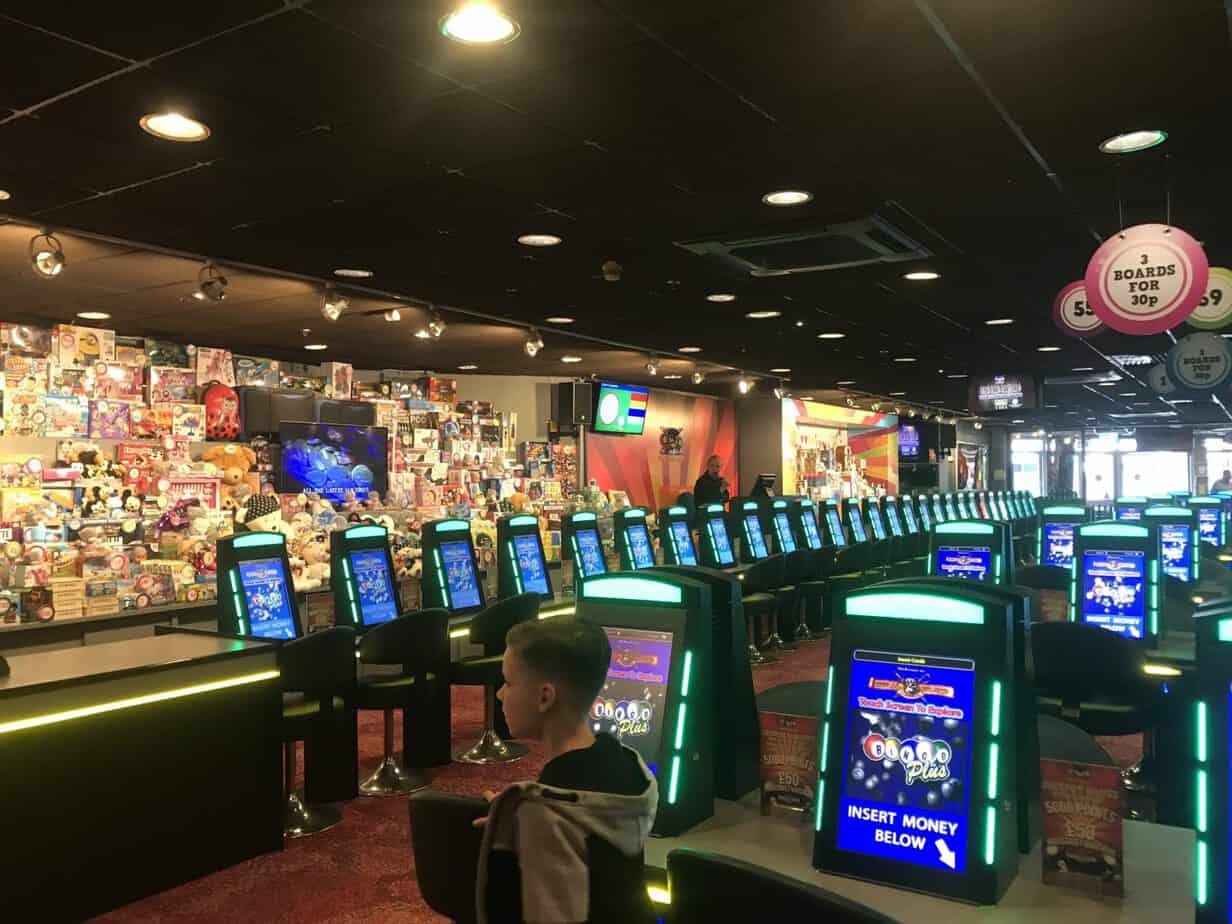 We decided to eat in The Buccaneer Restaurant, which is just located next to the entrance of Pirate Flyer.  Bucaneers is one of four restaurants to eat within Coral Island.   Again, the place is fully immersive and felt like we were inside a pirate ship, being served by Pirates! 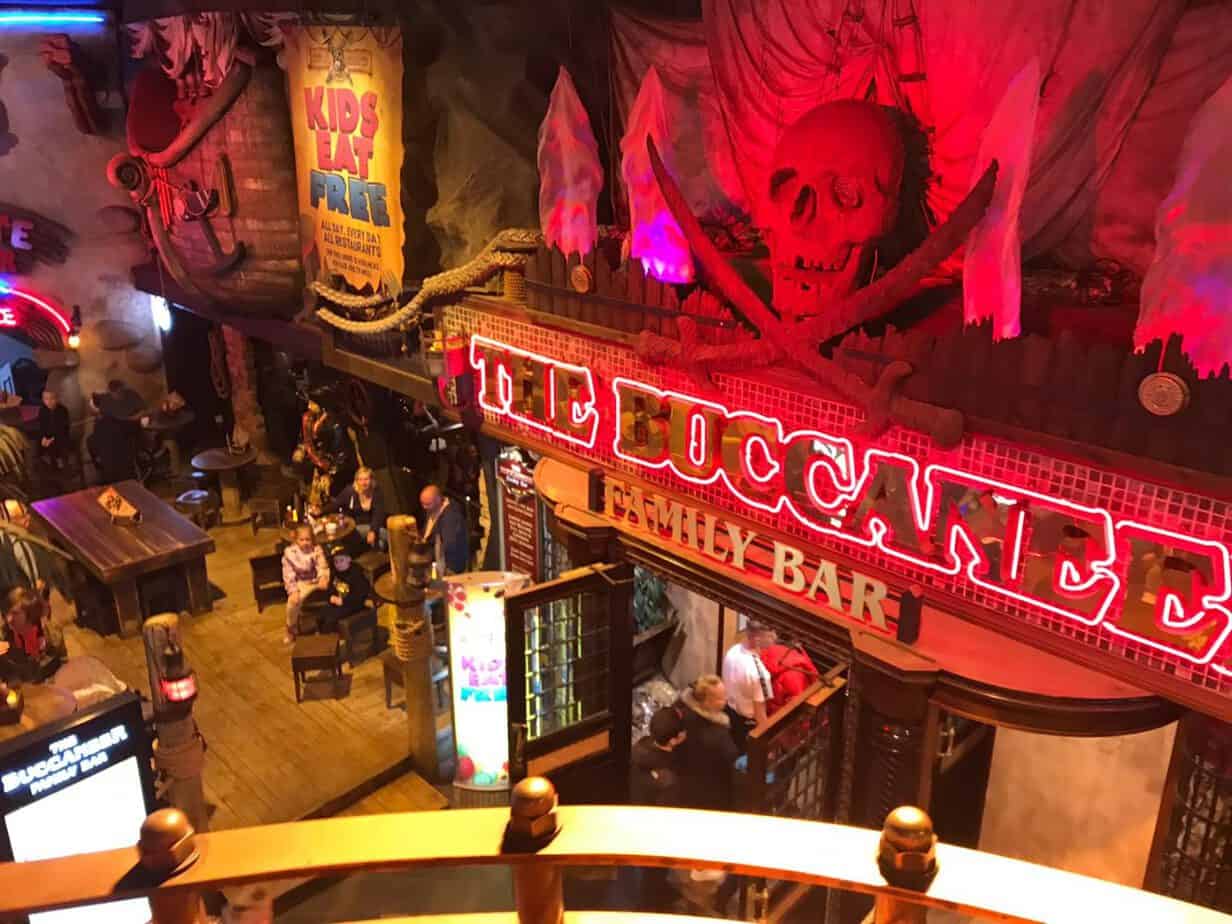 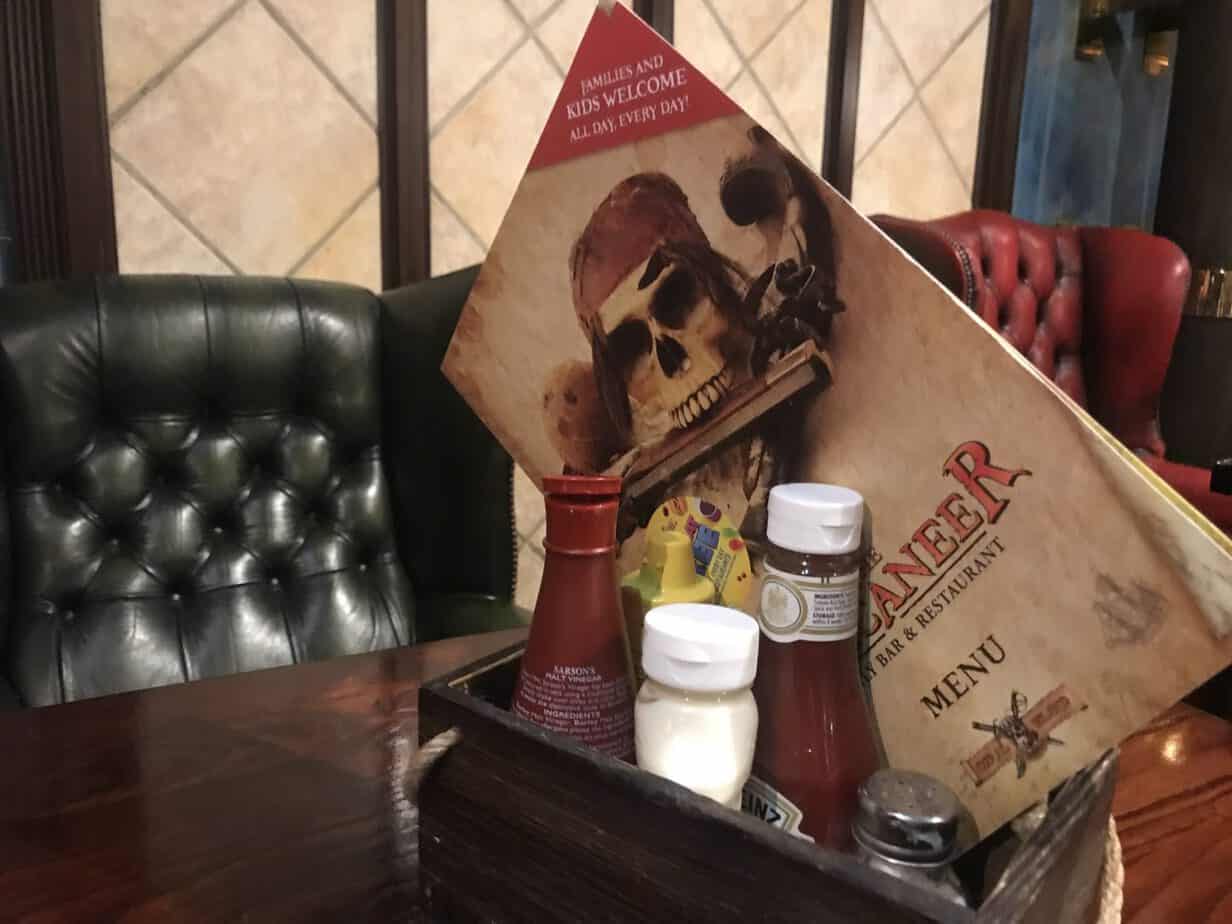 What’s even more fantastic about this place is that KIDS EAT FREE in all the restaurants on offer!  With that being said, each of our three chose chicken nuggets, chips and beans which was a great portion size and looked pretty nice!  Each child’s meal also follows with a ice cream dessert. 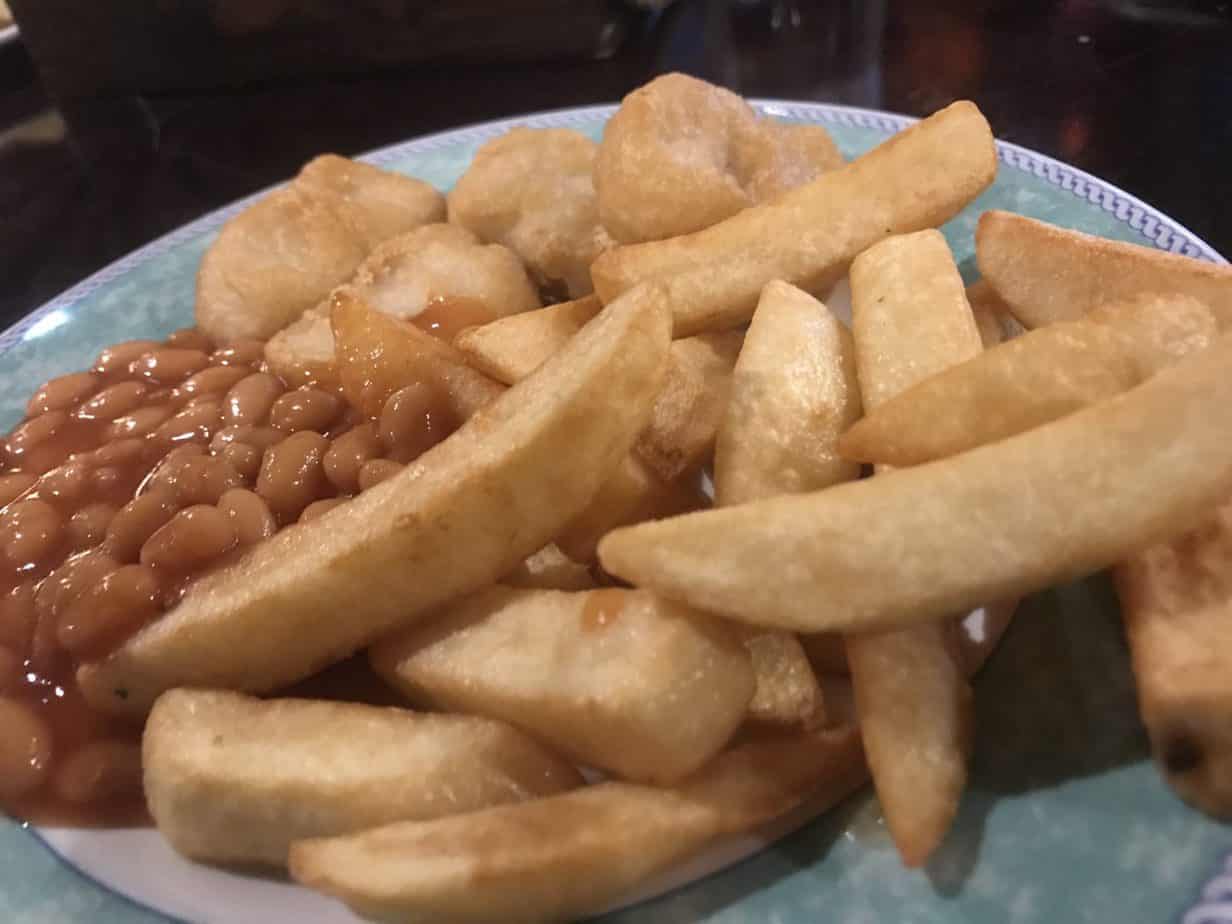 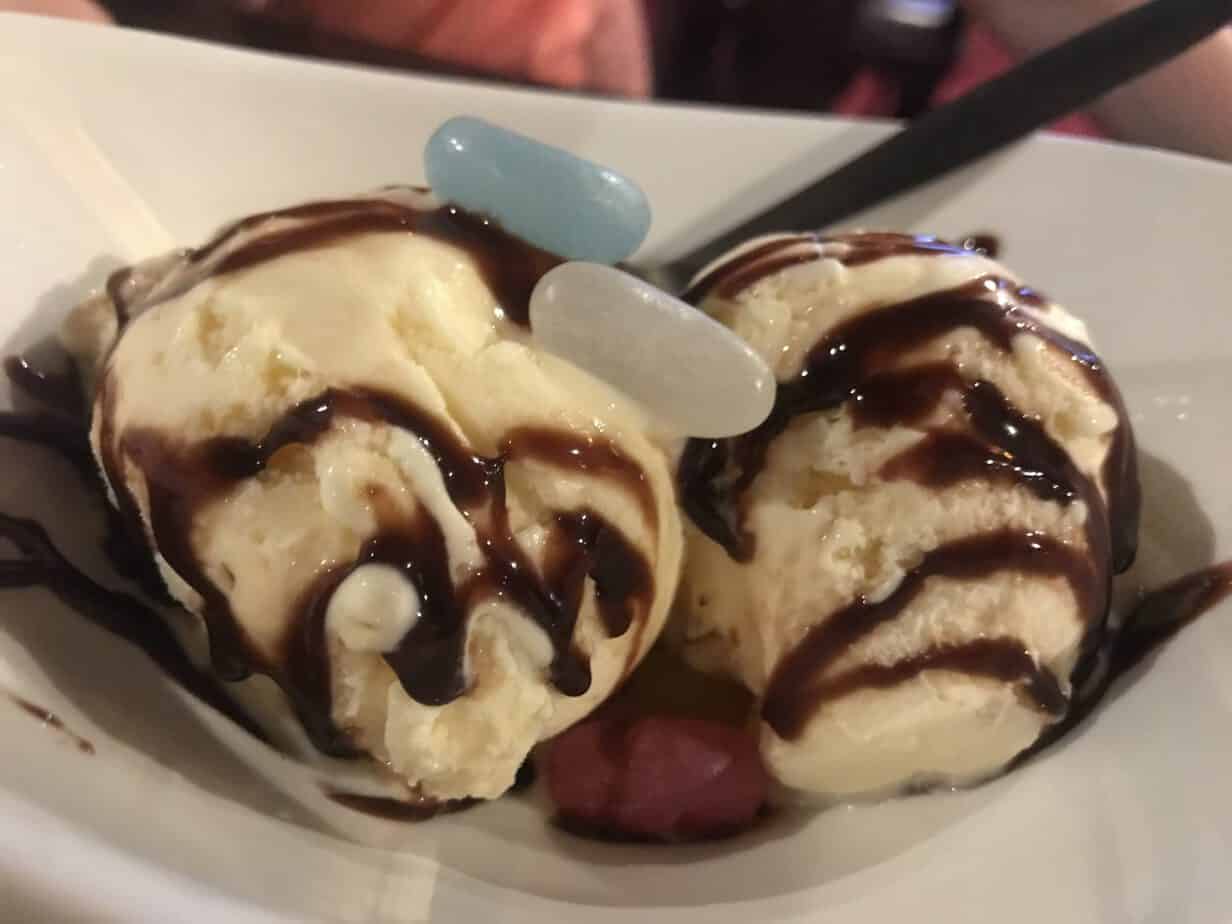 For us grown ups, we shared the loaded nachos and fried mushrooms to start.  Both were very tasty and the nachos were in particular my fave! 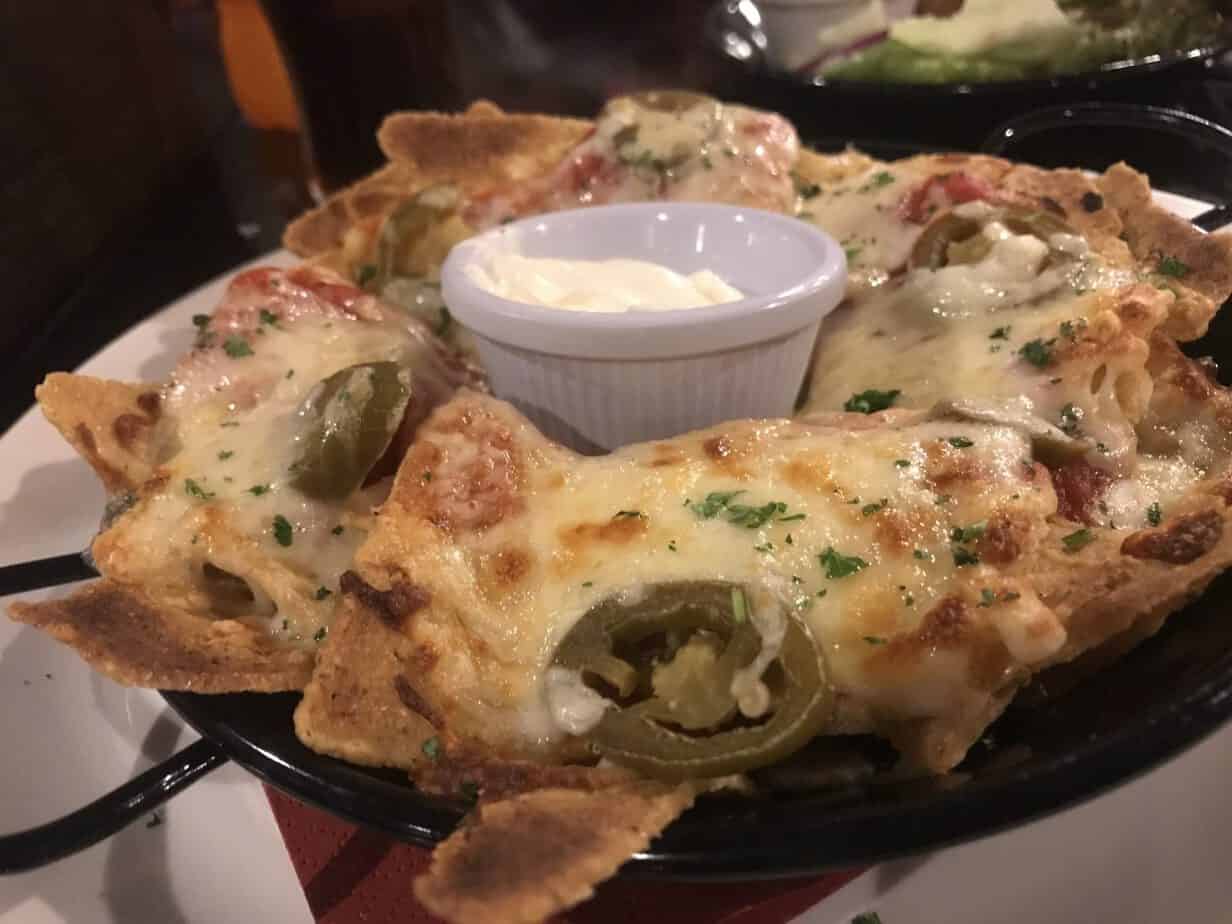 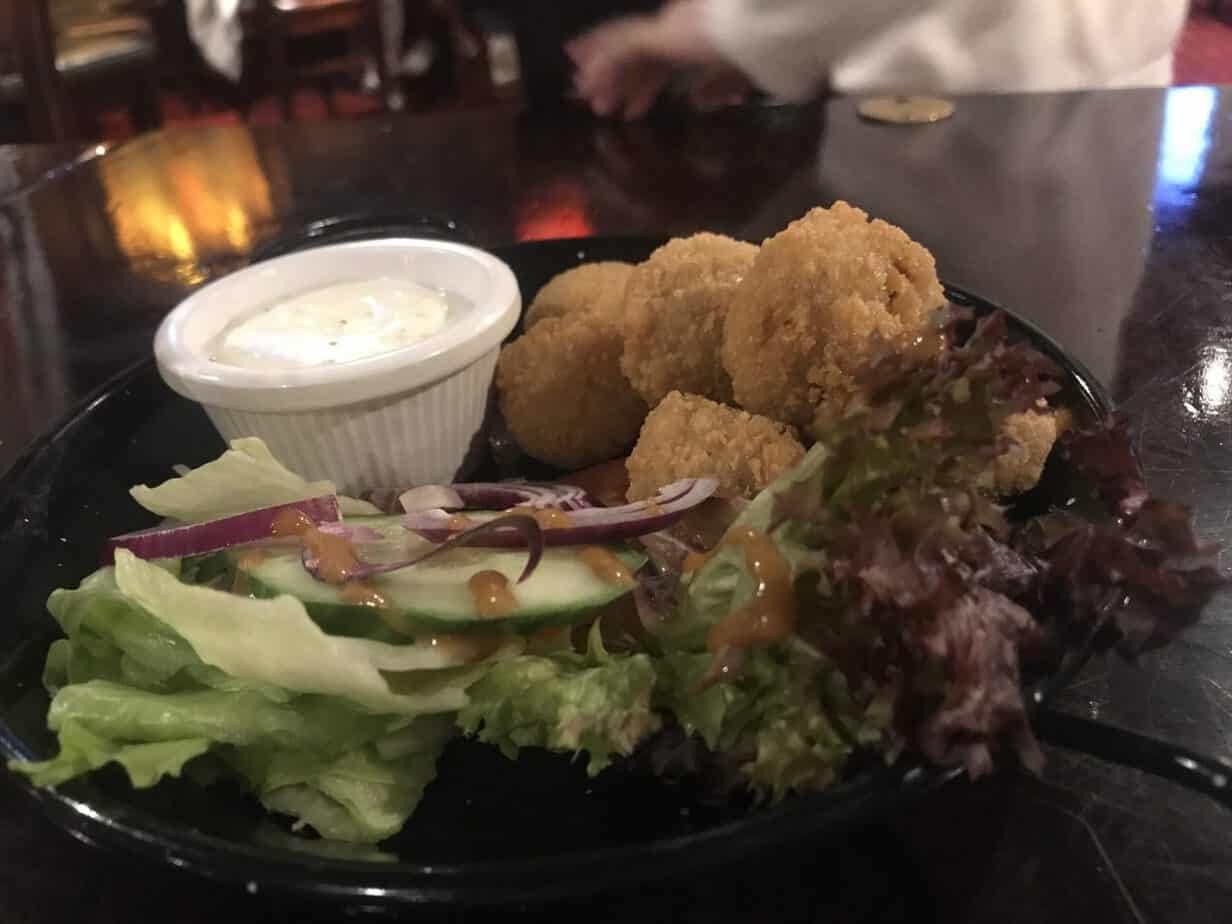 Matt chose a chicken burger for his main which he said was nice and he enjoyed it.  I went for the chicken which to be honest, I didn’t really eat.  There were far too many chips on my plate and hardly any chicken!  This did leave me room for my dessert, but unfortunately the apple pie did not cut the mustard, and I was left with a soggy piece of apple pie.  Matt chose chocolate cake, which he said was delicious.  With that being said, I really enjoyed our starters, so I think opting for a selection of these in the future would be my option. 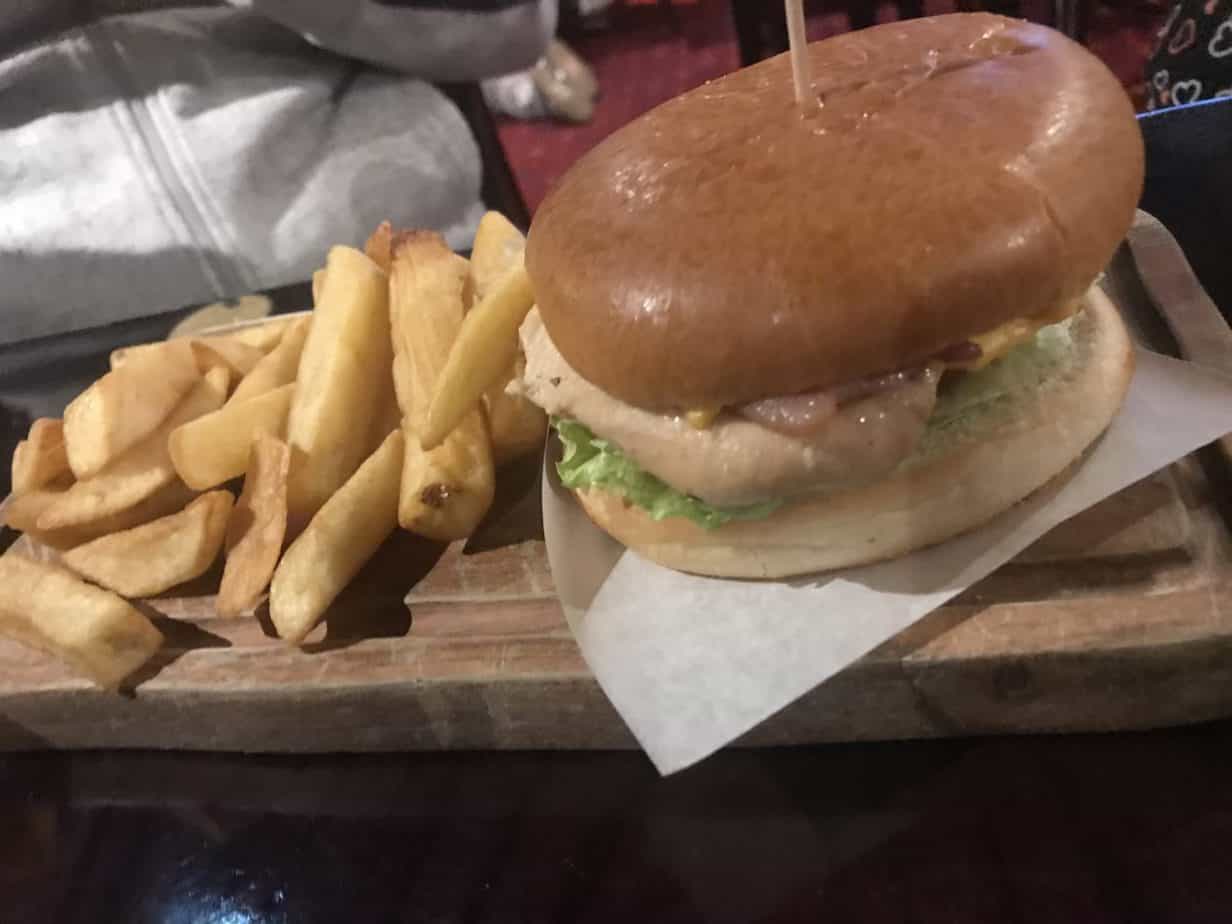 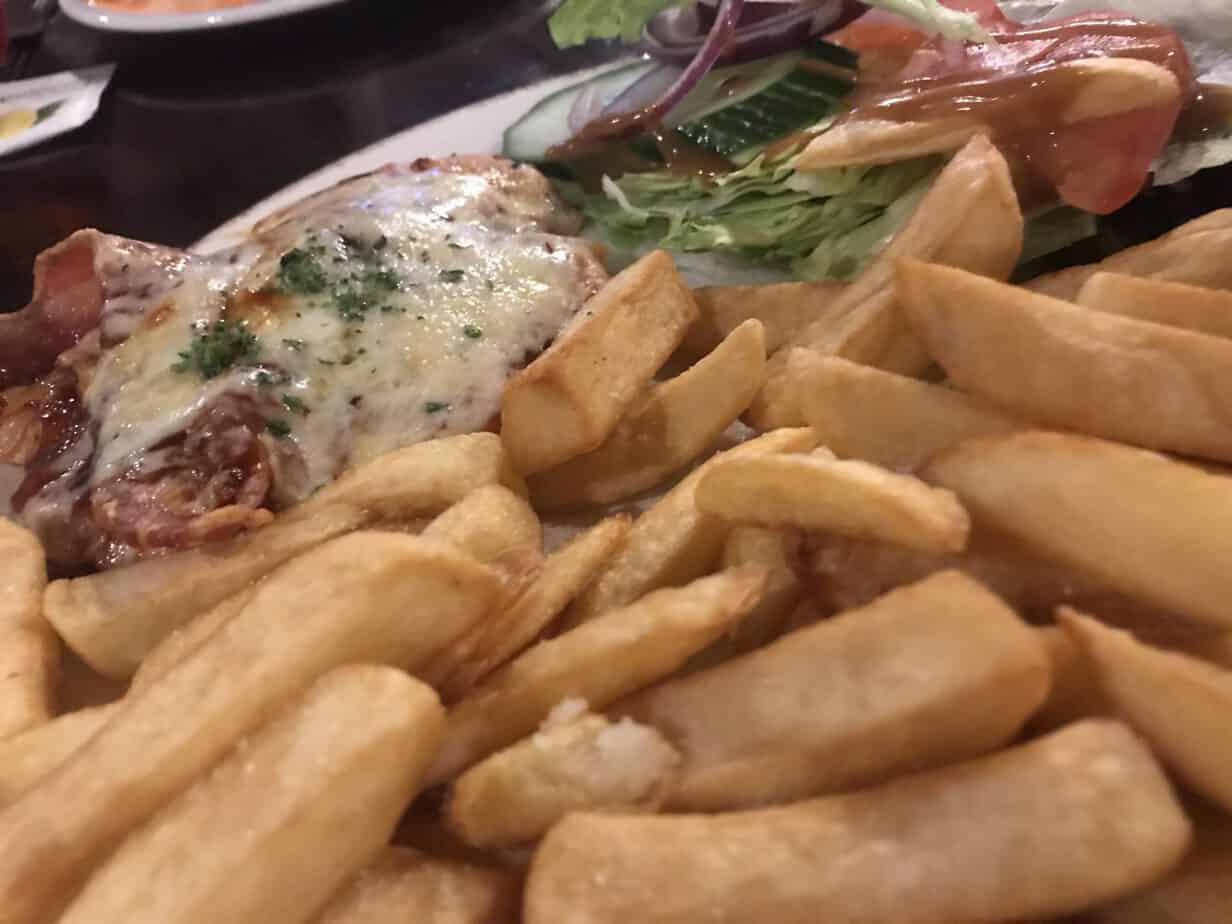 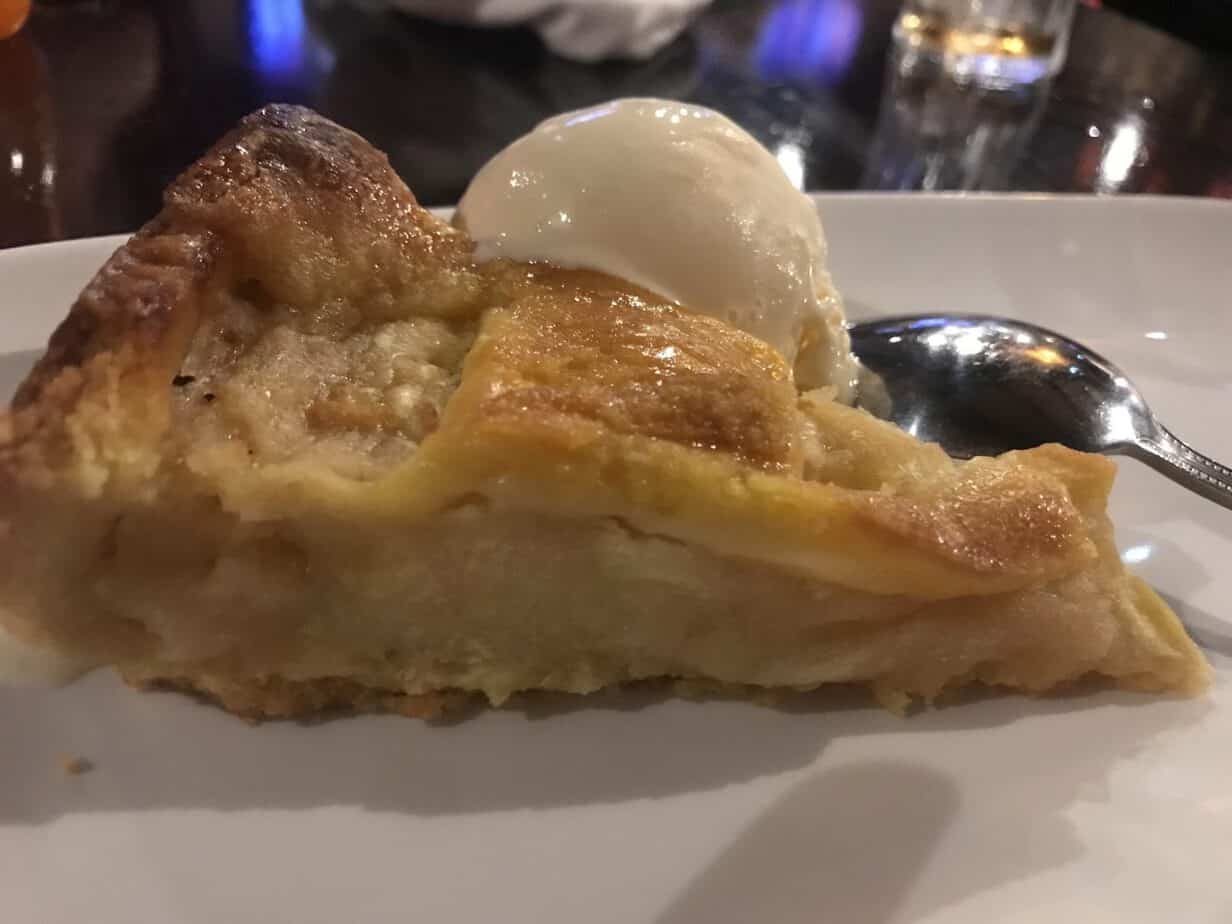 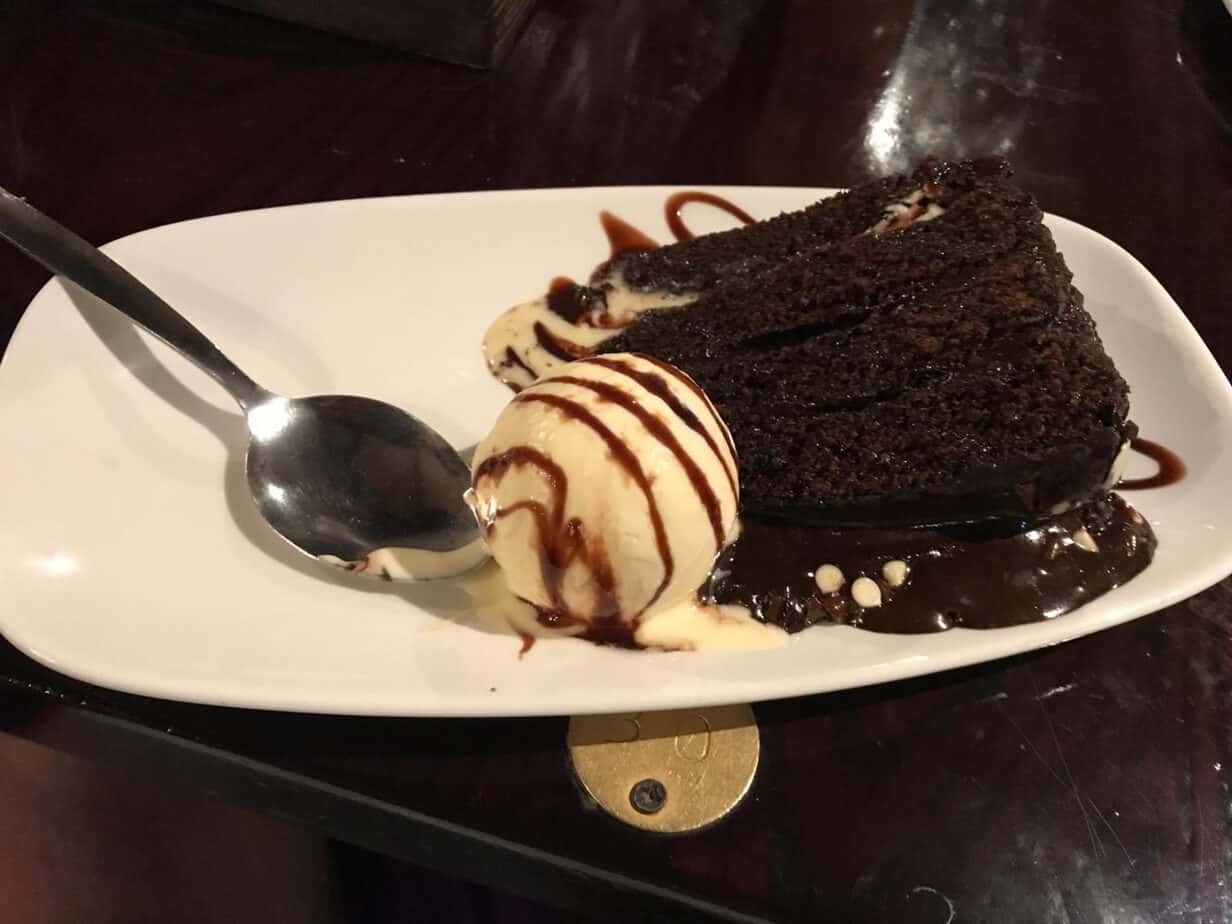 We spent over 5 hours in Coral Island – and that says it all!  It’s a fab fun and immersive place to while away some time with the kids during your break to the seaside.  We had a blast and there really is so much to do for everyone.  Don’t forget to collect your tickets as you go, then redeem your amount of tickets collected for a prize from the prize shop!

All the staff we encountered during our trip here were fantastic and really child friendly and helpful.  We had a particular temperamental ticket counting machine, and a member of staff stayed with her during the whole process to assist when it broke down!  The staff behind the prize counter were also so patient!

We cannot wait to return to Coral Island on our next trip to Blackpool.  Have you been yet?

Disney – What I got for Christmas

7 Fun things to do in preparation…

PREVIOUS POST
"90’s Nostalgia: What I loved about the Spice Girls"
NEXT POST
"Booking our Advanced Dining Reservations at Walt Disney World"
1 comments so far.