All you need to know – Disney Cafe at Primark Birmingham

Finally, the wait is over!  This month, Birmingham has welcomed the largest EVER Primark store to the city, and what a store it is!  It has only been open two weeks and I have visited two times already  (mostly for the Disney merch!)

Primark not only brings with it 5 huge floors of clothing for women, men and children, but it is also home to Duck and Dry, a barbers, Primarket Cafe and a……Disney Cafe!!!!  This is what I have been most excited about, as really there isn’t anywhere in the UK anymore where you ‘Disney dine!’

This week, we decided to visit with the kids and see what the Disney Cafe experience was all about.  I had been told to visit as early as possible to beat the crowds, and when we walked through Primark doors at 9.40am, I was pleasantly surprised.  Yes, we did arrived straight into the Menswear section, so it was particularly quieter, but I was happy to see SPACE – and lots of it! 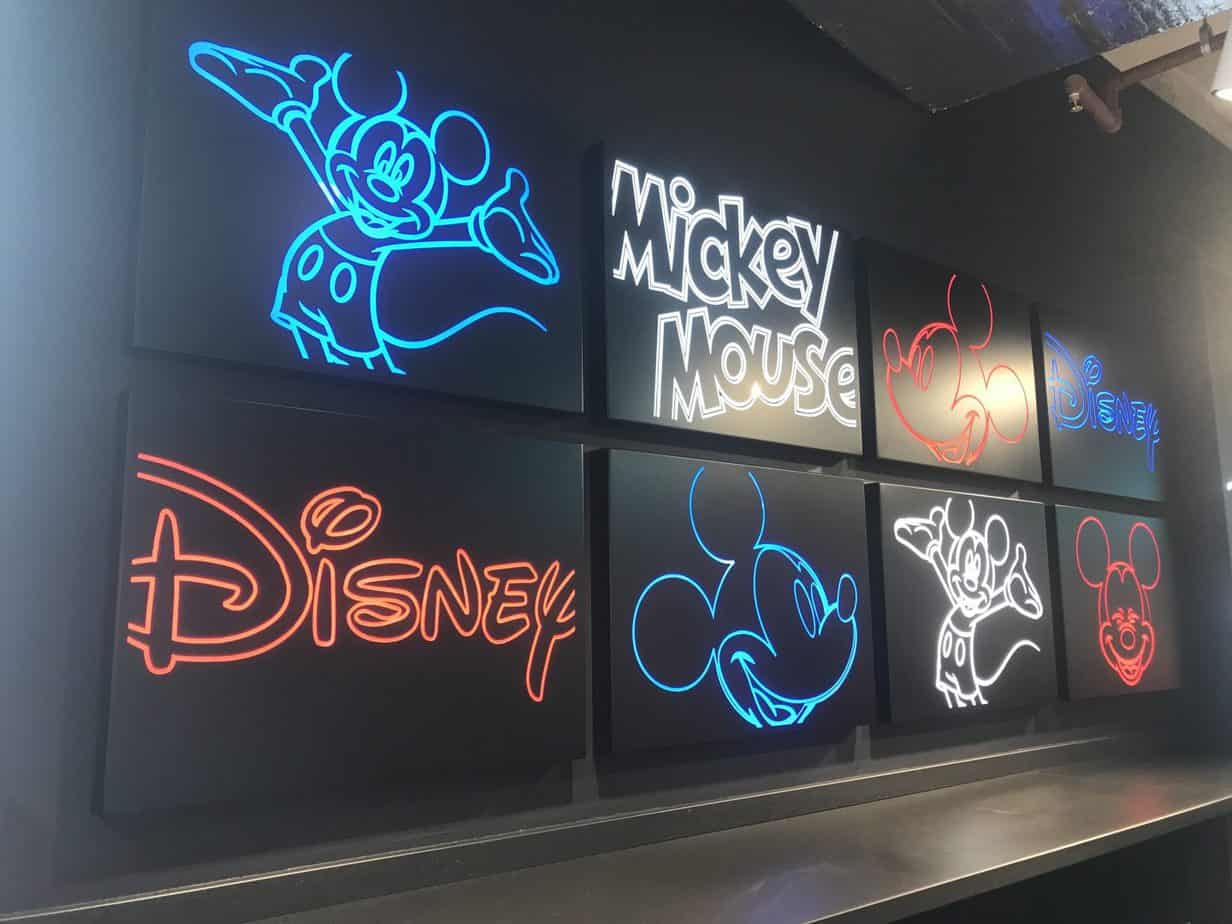 We then headed up to the fourth floor where children’s wear and the ever so popular Disney Cafe is located.  There was a small queue forming outside the entrance to the Cafe, and every table was taken.  However, it took no longer than 10 minutes in total to wait and as there is 5 of us, we really needed a larger table.  The served asked if we preferred a booth.  Some of the booths provided at the Disney Cafe have interactive touch screens within the table for guests to play on.  The kids were desperate to check this element out, so we waited an extra 2 minutes for one of these to become available. 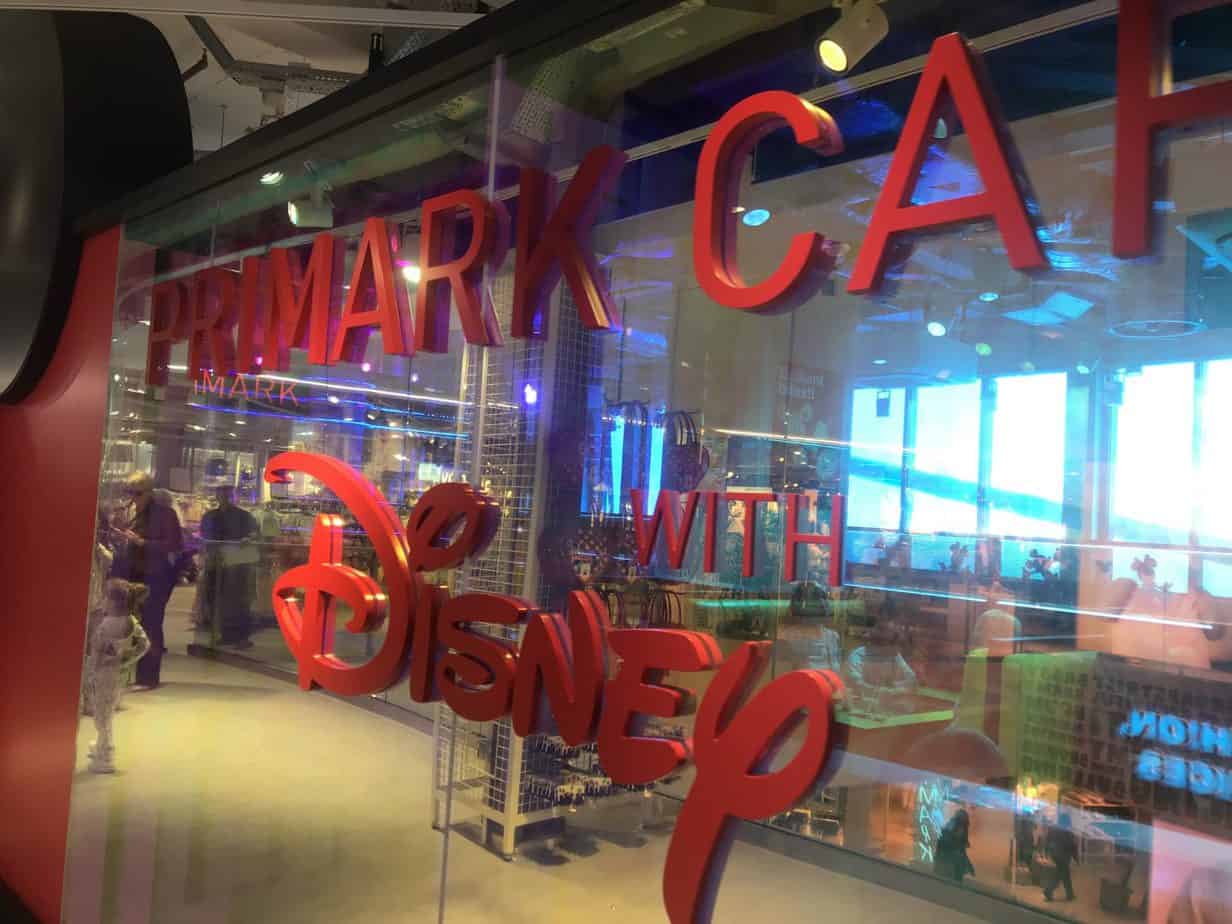 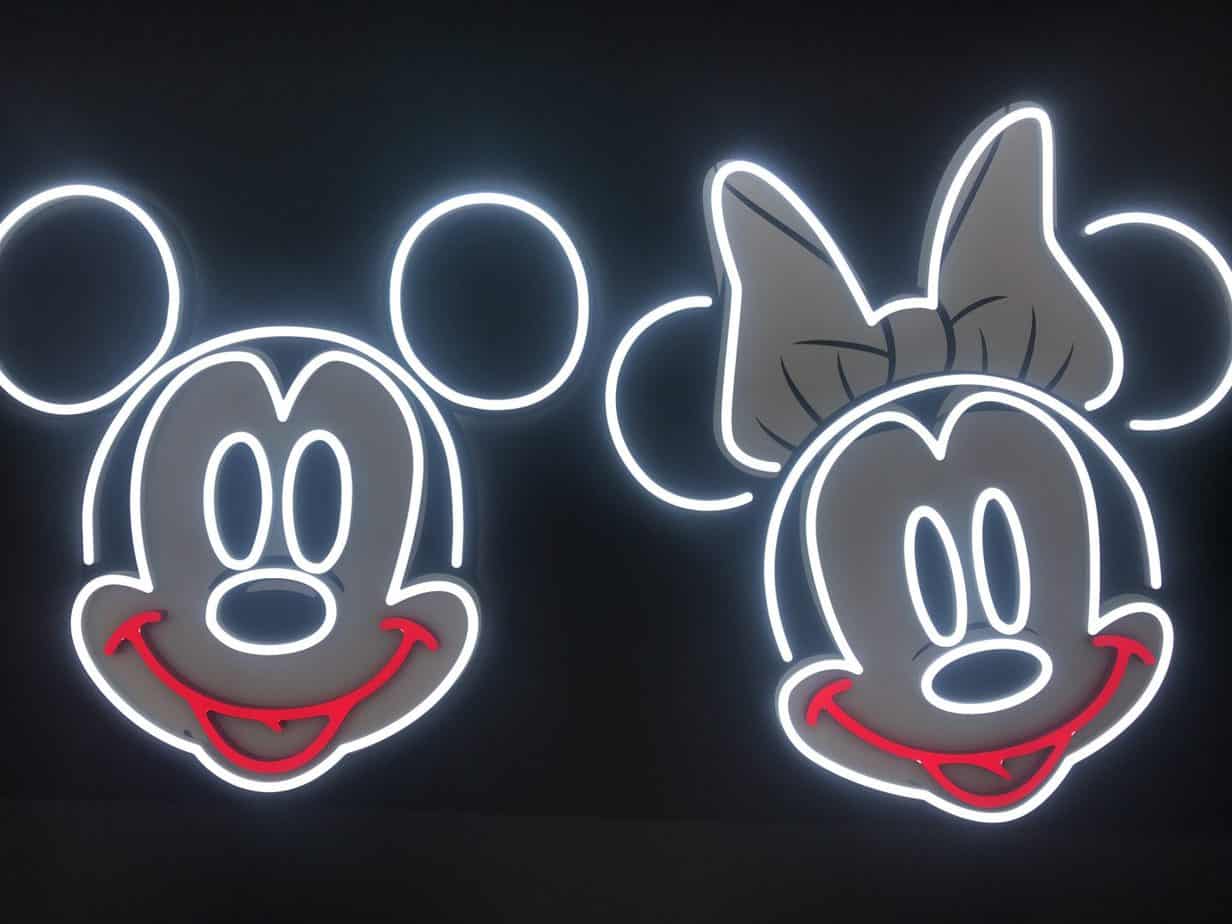 We got taken to our table by the Disney Cafe host, and were instantly surrounded by the Disney buzz!  The atmosphere was full of excitement and even though the Cafe is quite small, it didn’t feel cramped or overcrowded.  Disney music was playing and the overall theming is fab!

There is about 8 booths in total located in the centre of the cafe.  Around the edge there is smaller tables of up to four people. Towards the one end of the cafe, there is an array of television screens showcasing Disney images and then the self-service counter.  From what I could gather, there is only a children’s menu. available.   However, there is pastries, sandwiches and panini’s available too. 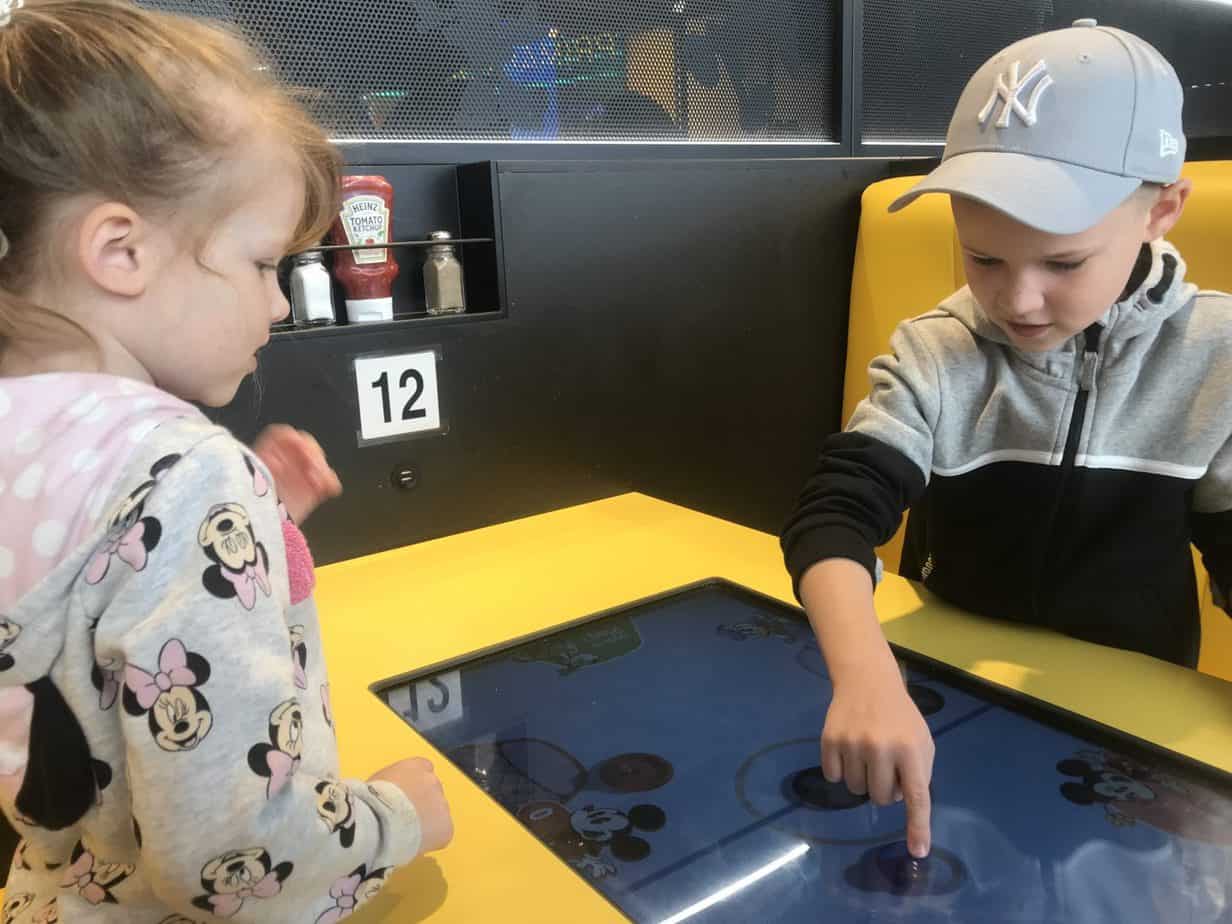 Our booth with an interactive tablet within the table 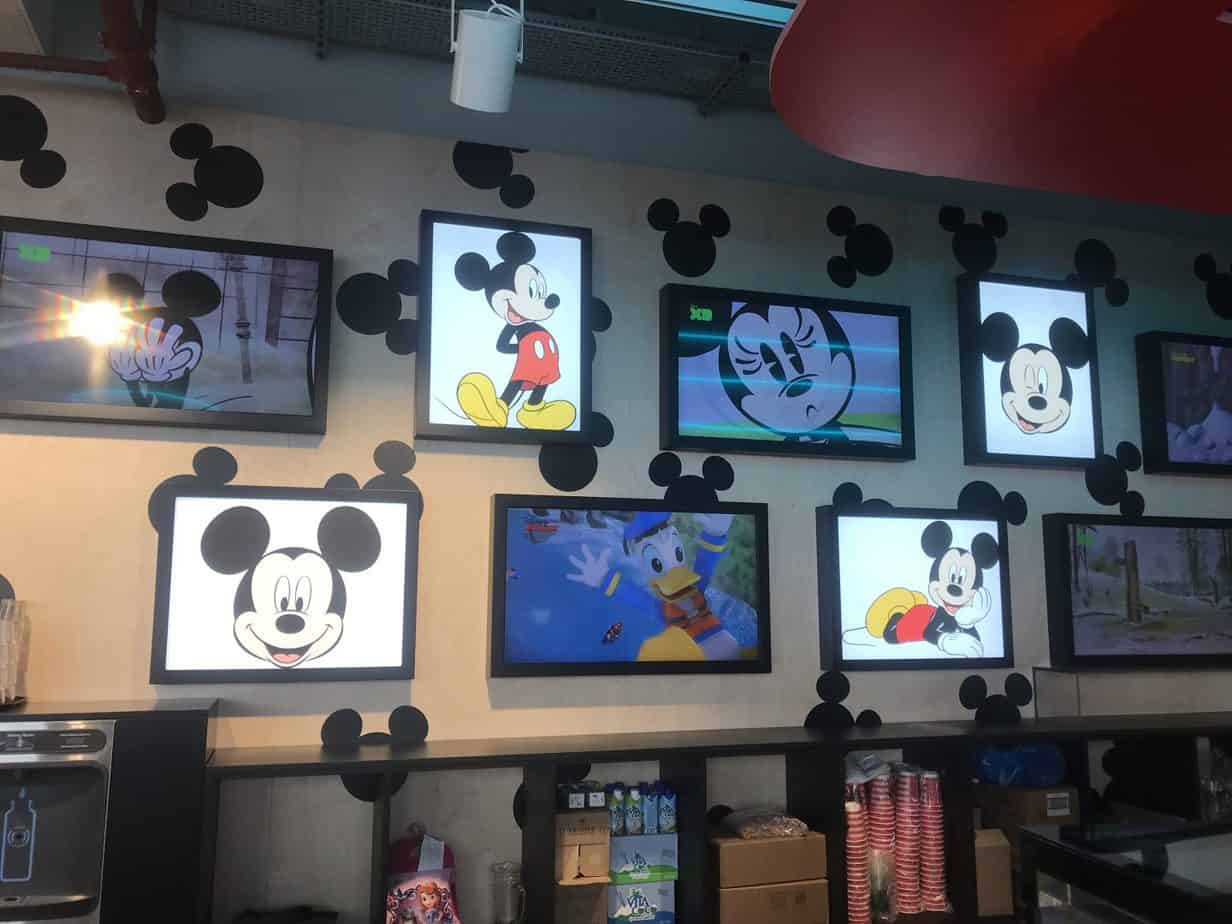 Mickey Mouse covers the walls of the Disney Cafe in Primark

The Cafe is themed on  the colours of Mickey Mouse –  black, red, white and yellow, which looks great all together. The booths are yellow with yellow tables however do be mindful that not each booth has an interactive screen.  The outer tables are white with colourful mickey shaped heads on them.

The walls showcase pops of Disney colour such as a stripped wall behind the self-service counter, a black canvas section with red, blue and white Mickey Mouse designs and black Mickey Mouse silhouettes surrounding the booths.  On each booth there is charging points available for your devices. 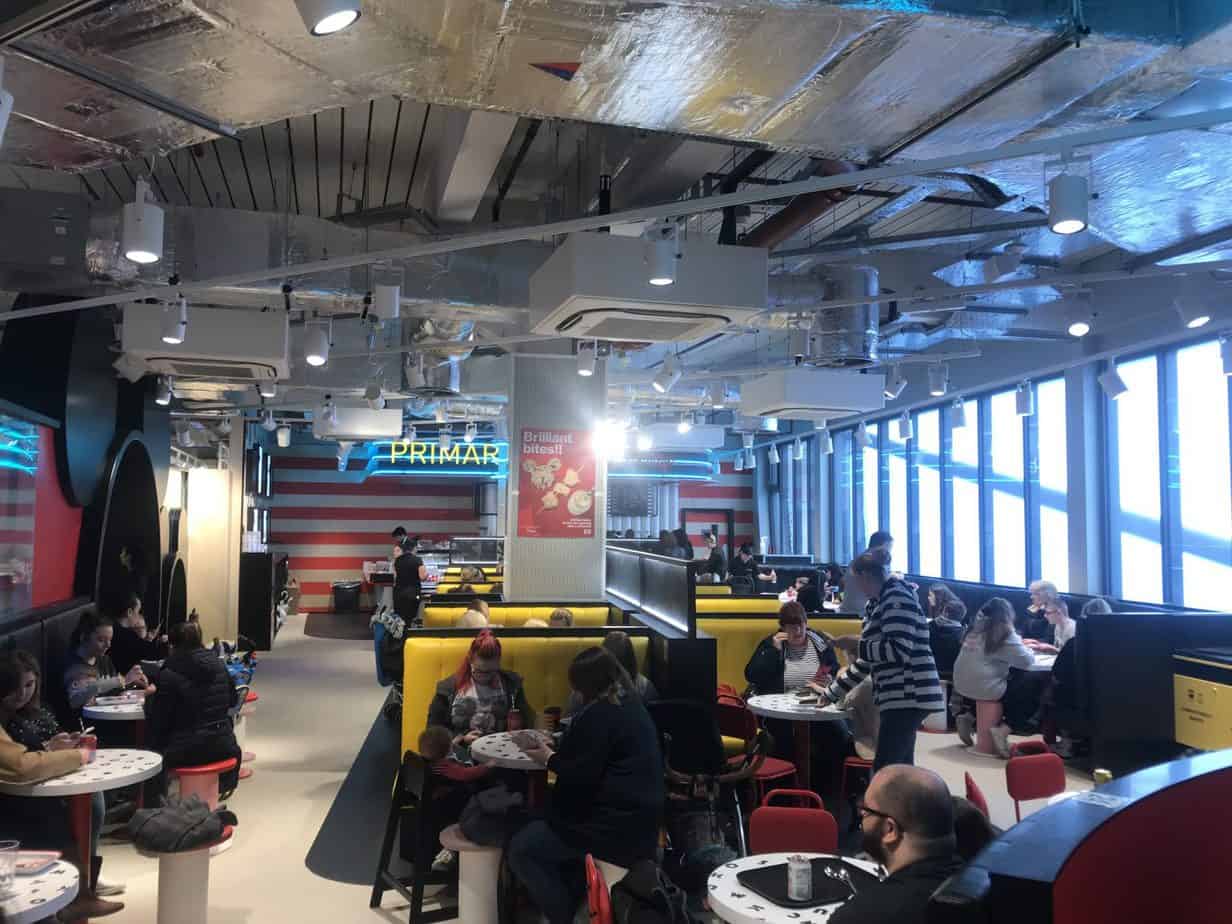 The Disney Cafe at Birmingham’s Primark

There is also the popular feature of large Mickey Mouse ear walkways as you enter and exit the Cafe.  These are really popular with the kids, as there is a smaller walkway which they can walk through – a very clever feature!

Another feature that I love is that all the staff wear Mickey ears!

The Food at Cafe Disney

As we visited in the morning, we all decided to order the Disney Mickey Waffles – You can currently only order these at Disney theme parks – so this was a real treat!  The Mickey waffles are offered on the children’s menu as a dessert option and come with a side of fruit and a coulis sauce.  They were priced at only £2.50 which I felt was fantastic!  I also ordered a cappuccino, the kids had 3 apple juices and my husband had a Diet Coke, totalling the bill to around £17. 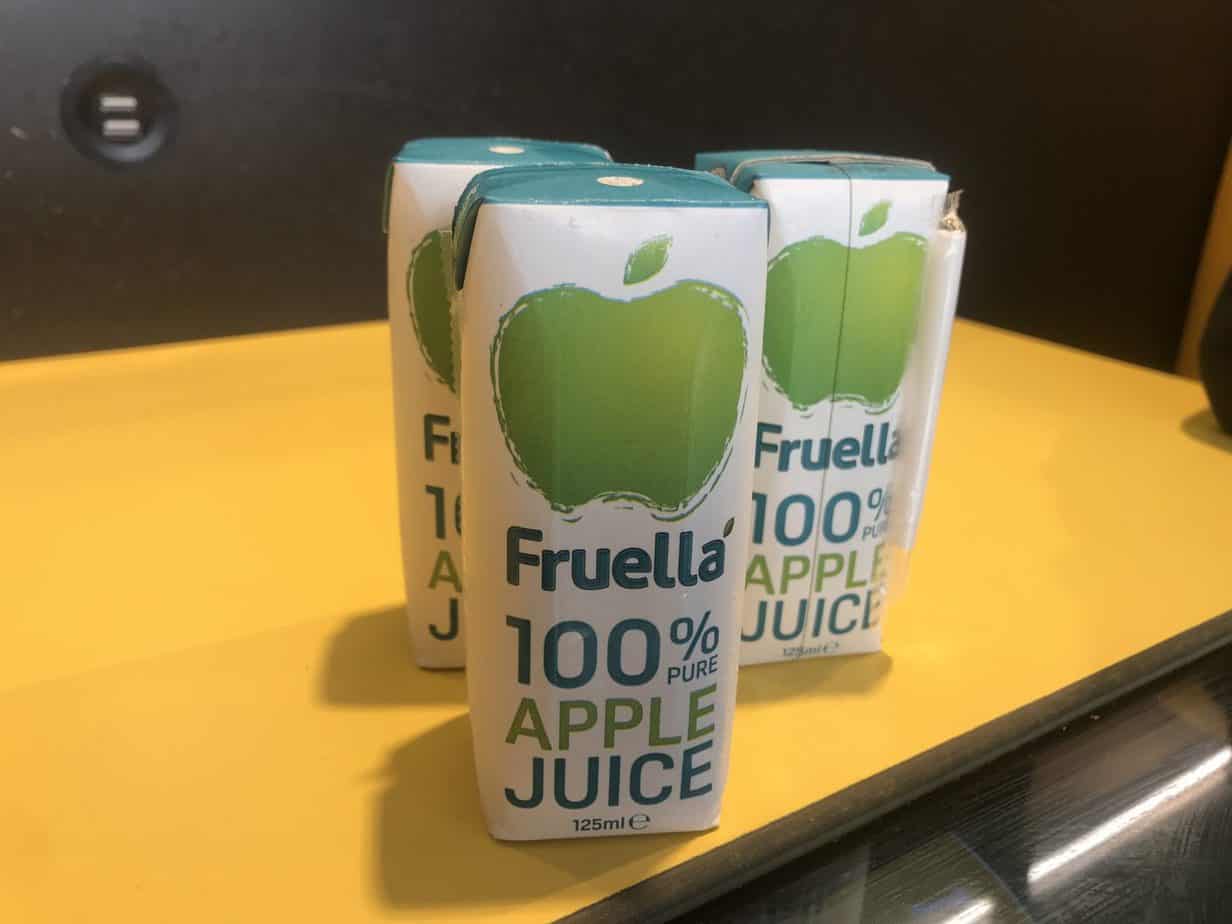 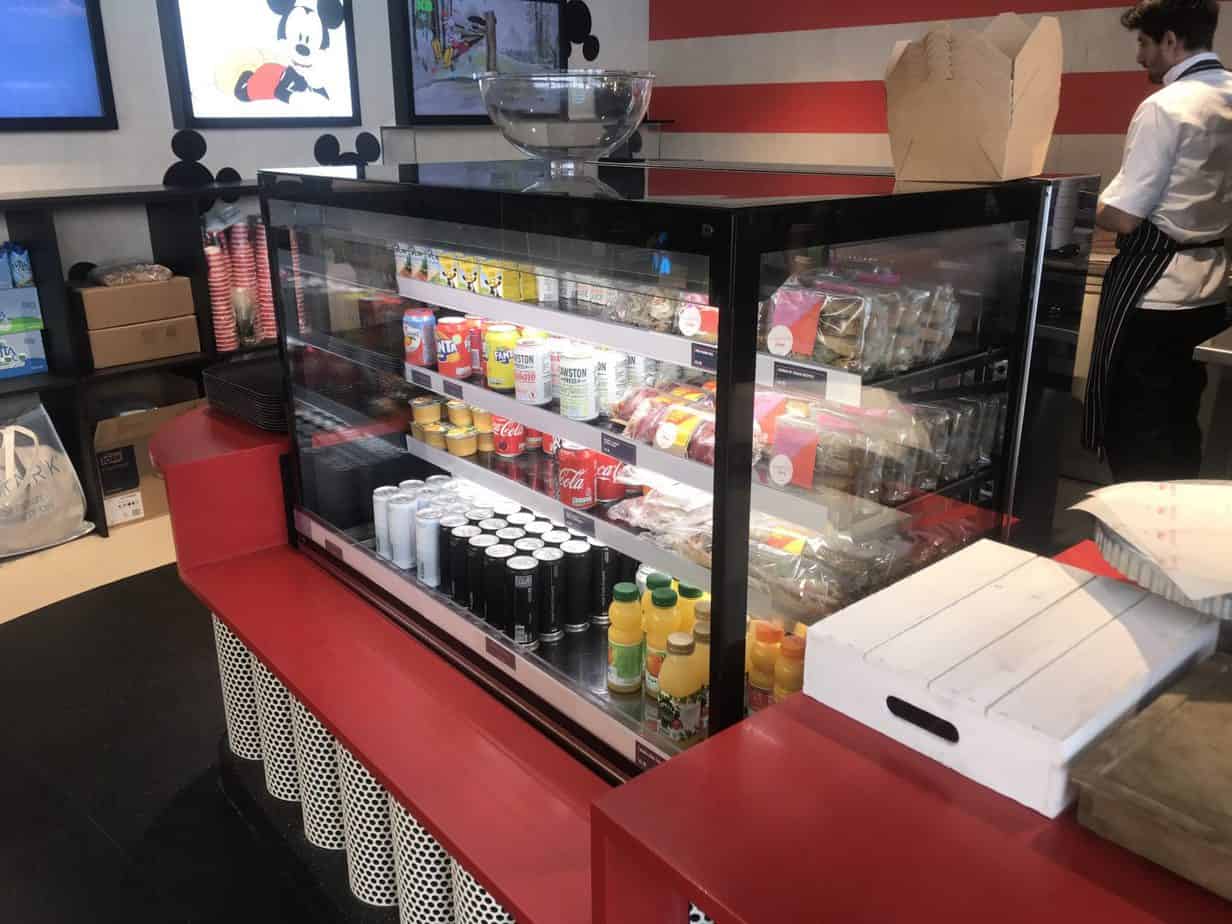 The service was average, and the food arrived after around 15 minutes.  It wasn’t so much of an issue as the kids were most happy playing on the interactive tablet.  However, I did have to chase my cappuccino twice which arrived after our food.  BUT, the coffee was strong and full of flavour. 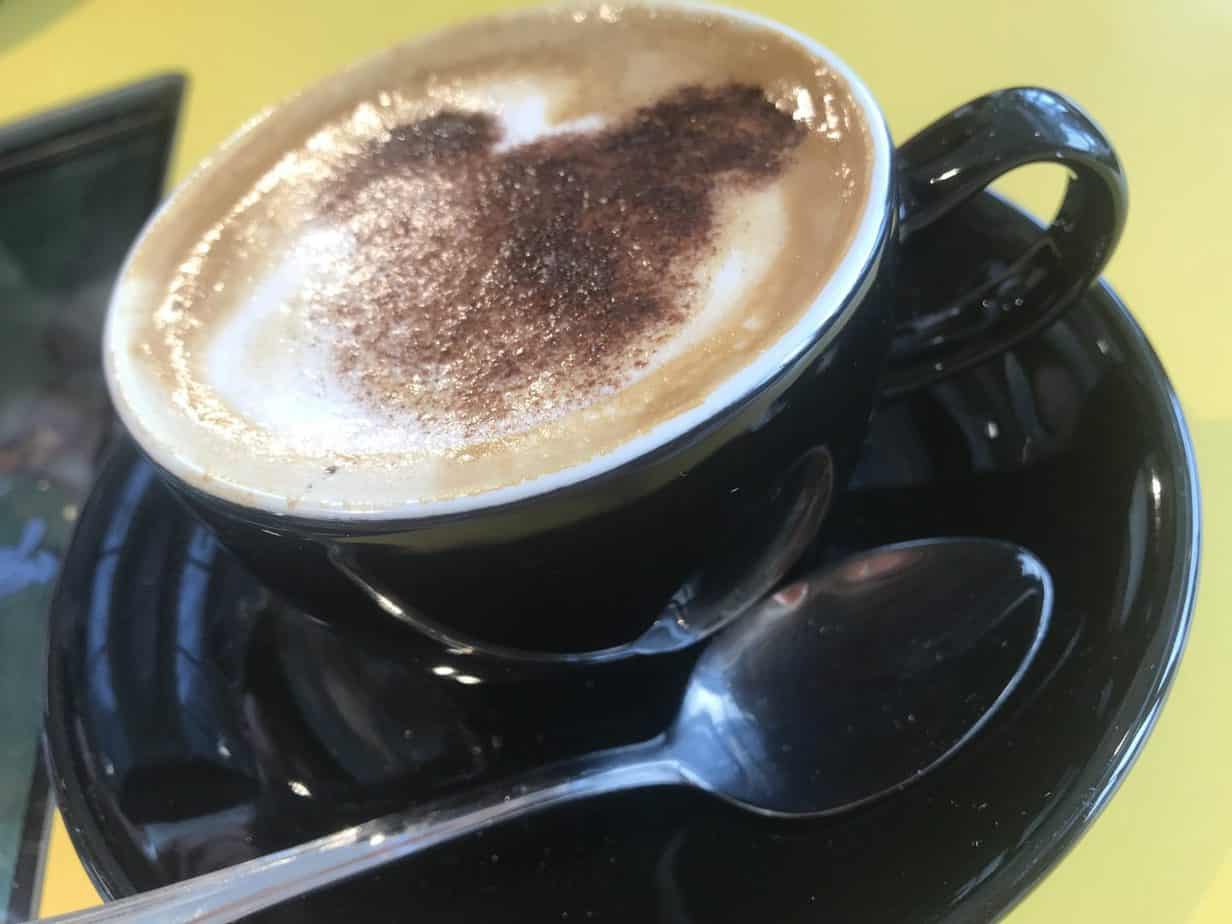 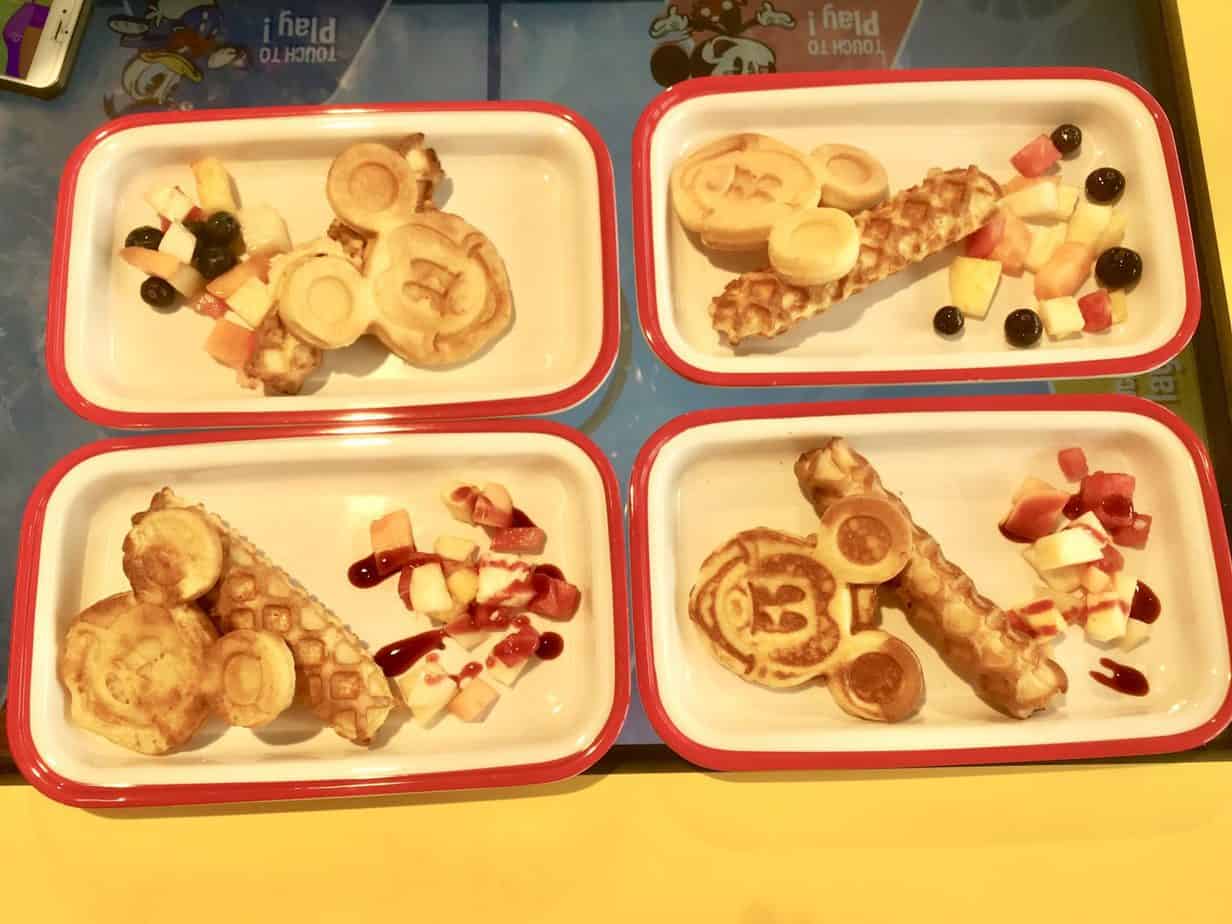 When the waffles arrived, there was only two fruit salads that were dressed in the raspberry coulis.  My kids did want sauce so I did ask a server who immediately brought over some maple syrup which is what we wanted.  I would recommend that the Disney cafe offer Maple syrup in a little side dish with each serving.

On each plate was one Mickey Waffle and one longer shaped waffle, as well as a side of fruit.  The fruit varied across the dishes but was mostly pineapple, melon, watermelon and blueberries which tasted very fresh. 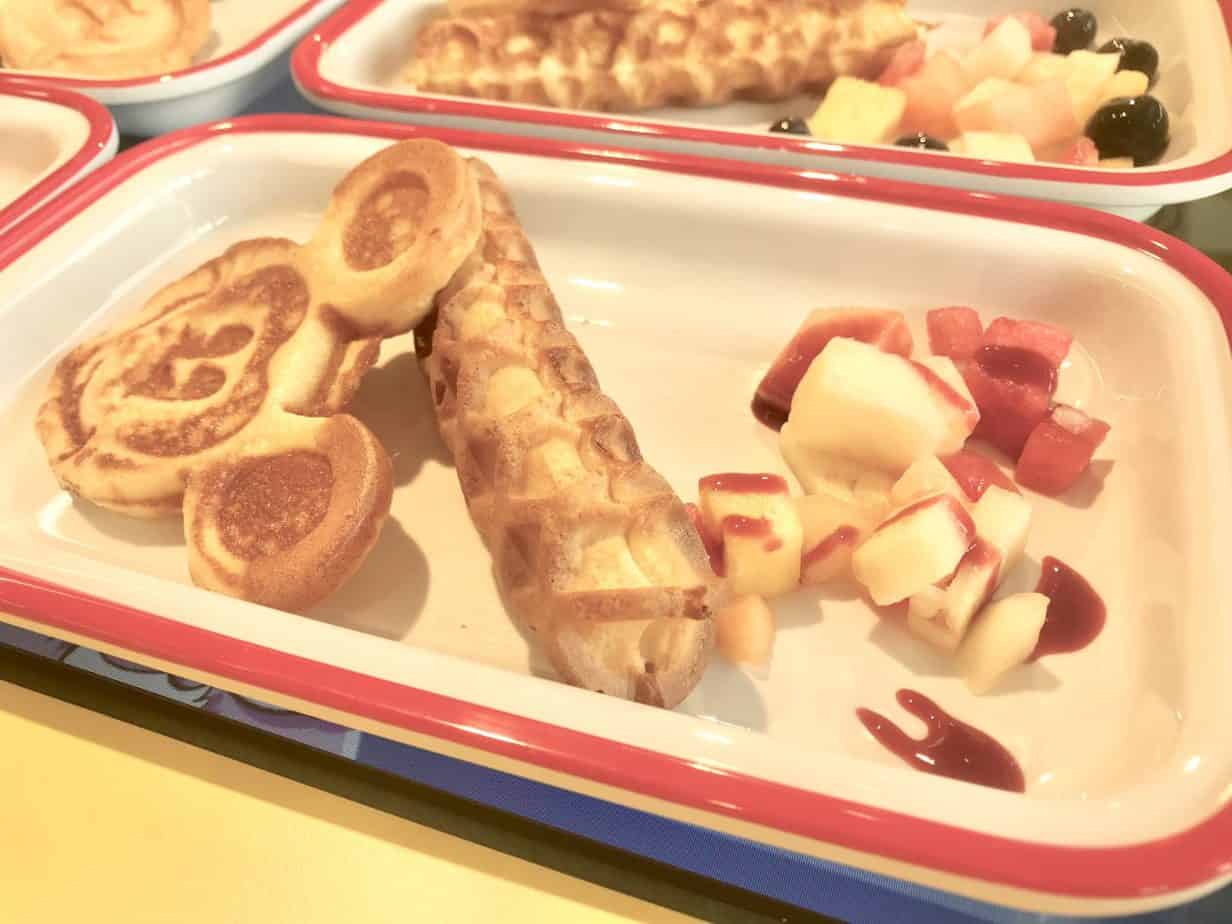 Taste wise – I was very impressed and really enjoyed my portion.  All three kids also cleaned their plates aside from a few pieces of fruit.  Mr B said that he preferred the longer waffle’s taste compared to the Mickey shaped waffle. This was much crunchier and did taste nice.

As well as Mickey Waffles, also included in the Children’s menu is:

There is also several sides to choose from:

For a main and a side, the price is £5.  Add a smoothie for an addition £1 (which I think is great value!) You can chose from:

The desserts are either: 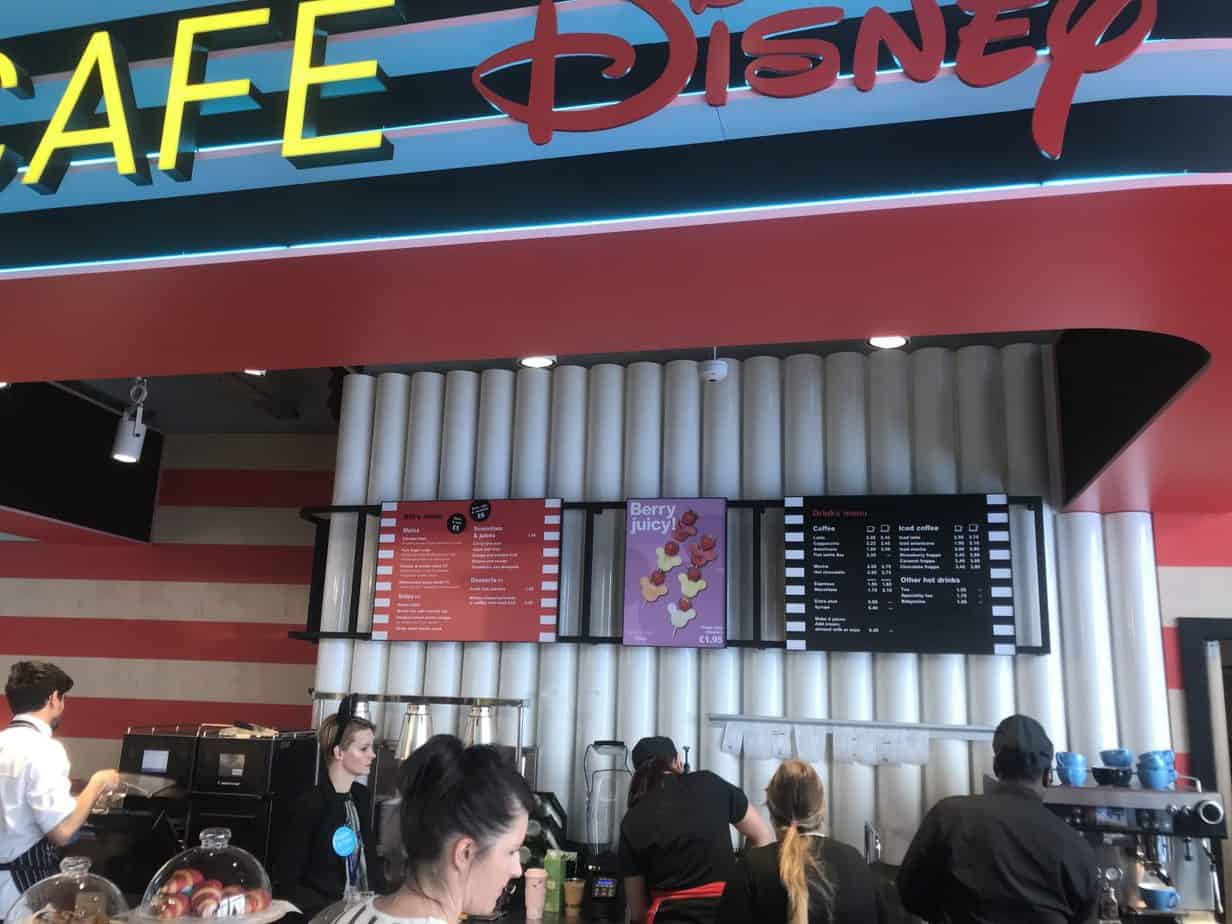 The Disney Cafe Menu’s at the self-service counter – spot the Mickey Mouse Croissants!

There was also an array of hot and cold drinks to choose from including ice coffees.  I love how the menu is slightly different and healthy too!  Not a greasy chip in sight!

Next to the rear of the Cafe is the children’s interactive zone.  This was cornered off from the cafe, which I am unsure why as it would have been nice as an extension to it and let the kids safely play.  However, it is accessible from the shop floor and allows the kids some down time whilst shopping at the biggest Primark in the world! 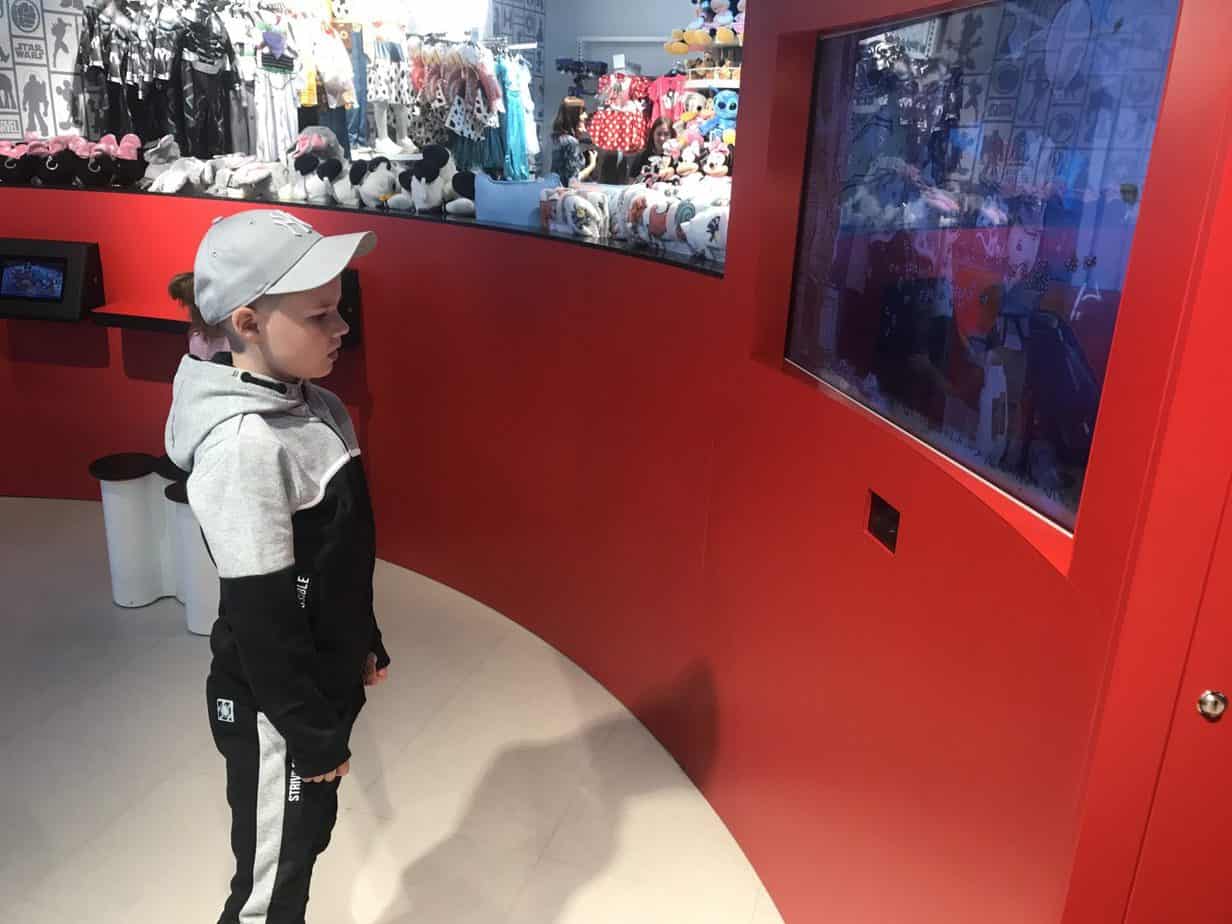 There is a large interactive screen which picks up your kids faces, an interactive floor and smaller screens around the edge, complete with Mickey Mouse stools.  The kids had fun in here for 10 minutes before we left.

Overall, we had a lovely experience at the Disney Cafe in Primark.  Yes its busy.  Yes the service was a little slow.  But, the staff were friendly and welcoming, the place is fun and exciting for Disney fans big and small, and the food tasted good!  It’s also a great addition to Primark in that the kids can have a break away from being dragged around the store! 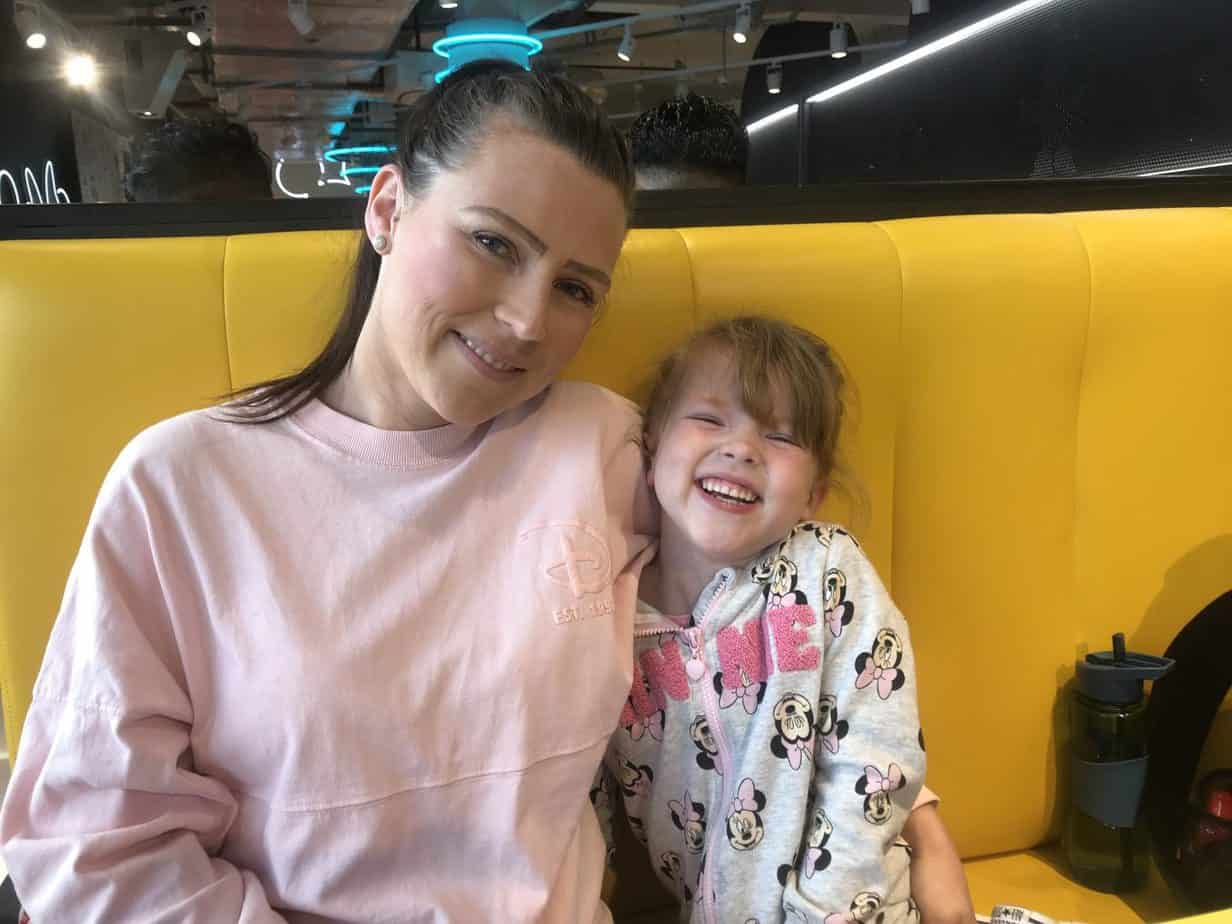 Missy and I happy as larry in the Disney Cafe

I absolutely loved it, and cannot wait to return (with or without the kids in tow!)  I think its such a fun element and as we are a huge Disney fans, of course it is most appealing to us.  As a person living on the outskirts of Birmingham City Centre, I am super excited to have this store and all its facilities on our doorstep! 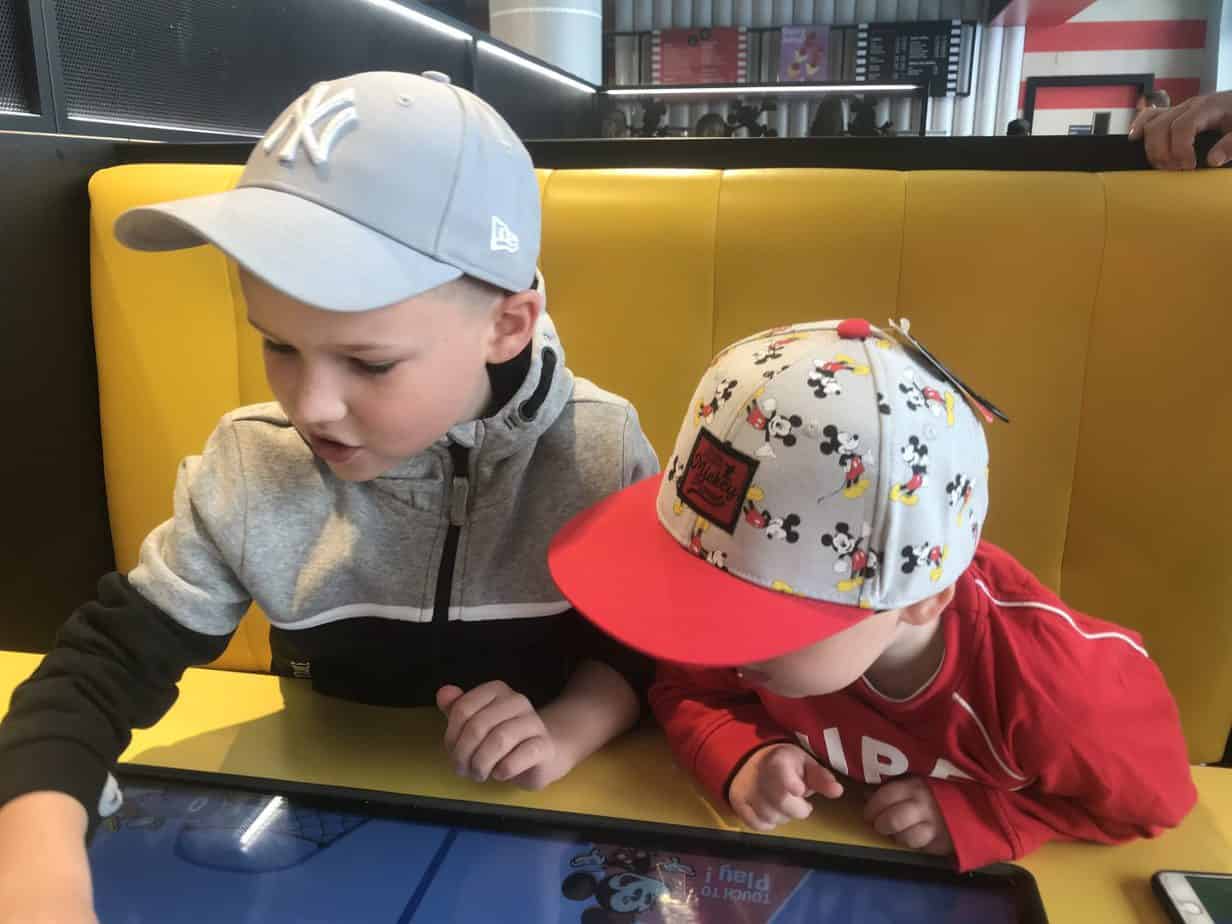 Have you been to the largest Primark in the world?  Do you have any thoughts on the Disney Cafe?  Let me know in the comments below!