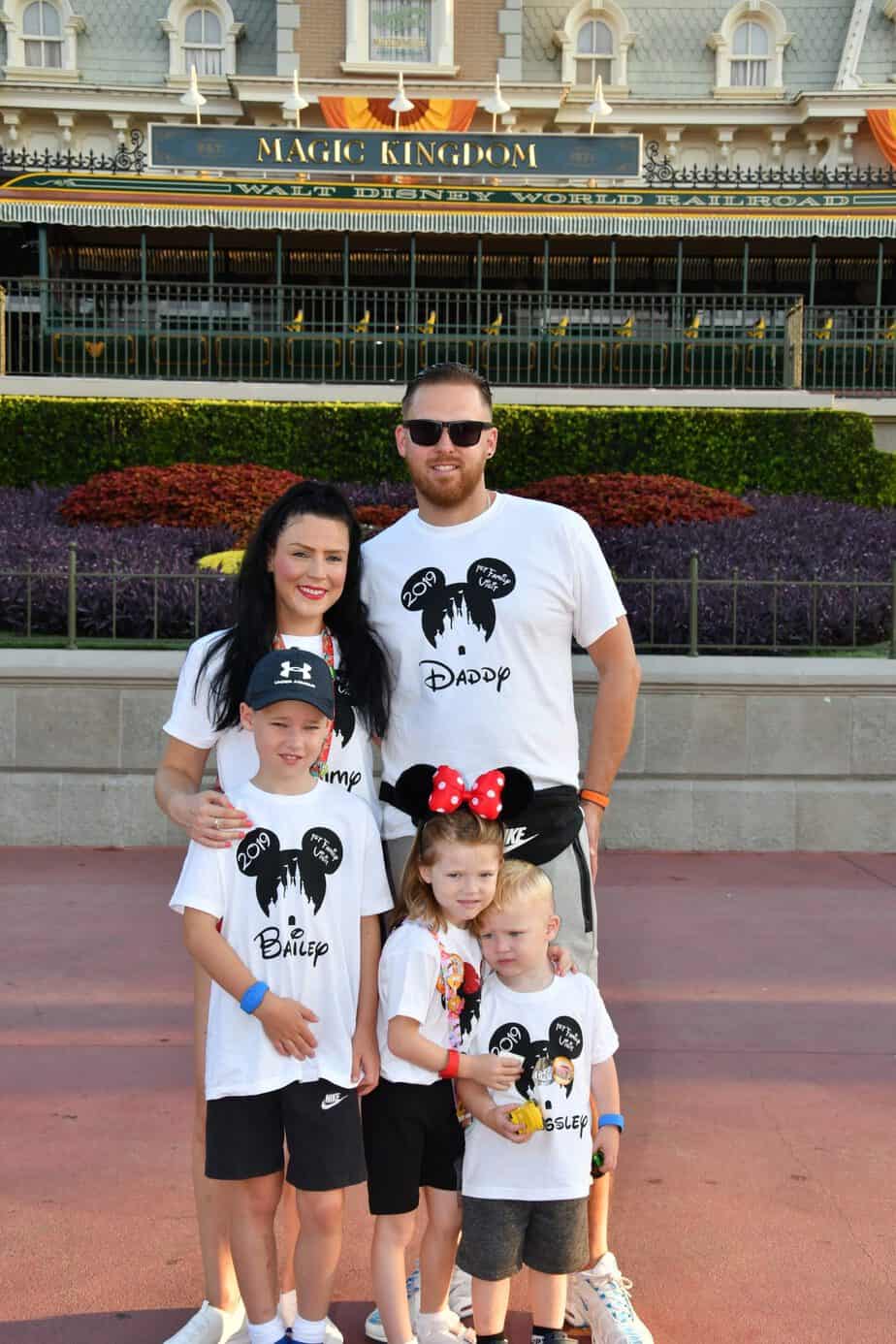 This morning I couldn’t help but wake up at 5.30am!  Not only was it jet lag playing a part, but also because I was so blooming’ excited!  We hadn’t unpacked so we left the kids to sleep a little longer and decided to unpack 5 suitcases as quickly as possible.  Actually, it was pretty easy and it allowed the kids to slowly rise and we watched some Disney Parks TV.  I made myself a coffee and we all showered ready for our first full day in Magic Kingdom.

Prior to our holiday (well months prior to it in fact,) I’d ordered some Disney family T-shirts.  We all wore them ready for our day ahead.  It was around 7am by the time we were all out of the hotel door and we saw the exterior of Port Orleans Riverside in all it’s glory.  Wow!  It was absolutely beautiful with it’s New Orlean style with masses of greenery and the stunning Sassagola river running through the resort.  The Riverside Mill is also lovely, right next to the quick service restaurant and Boatwrights, there table service restaurant. 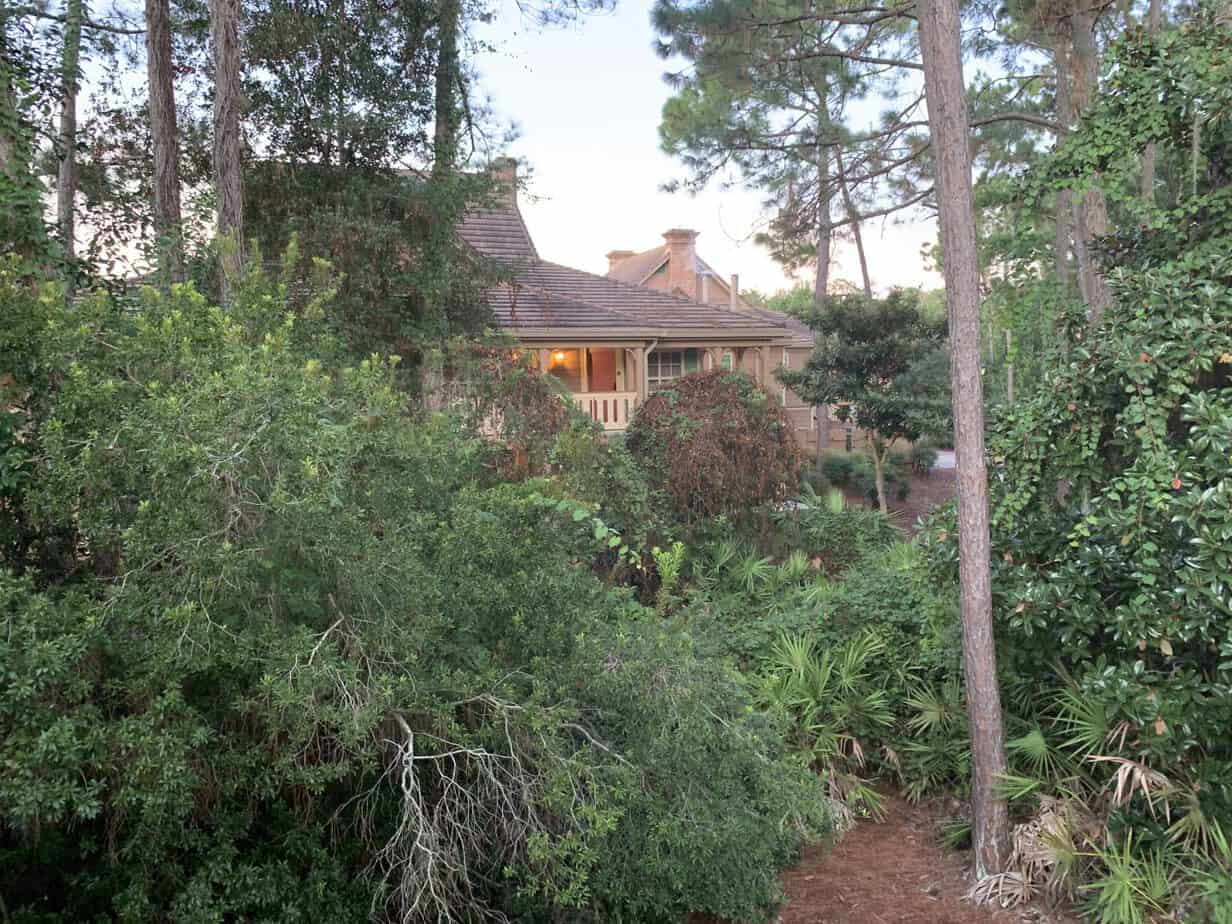 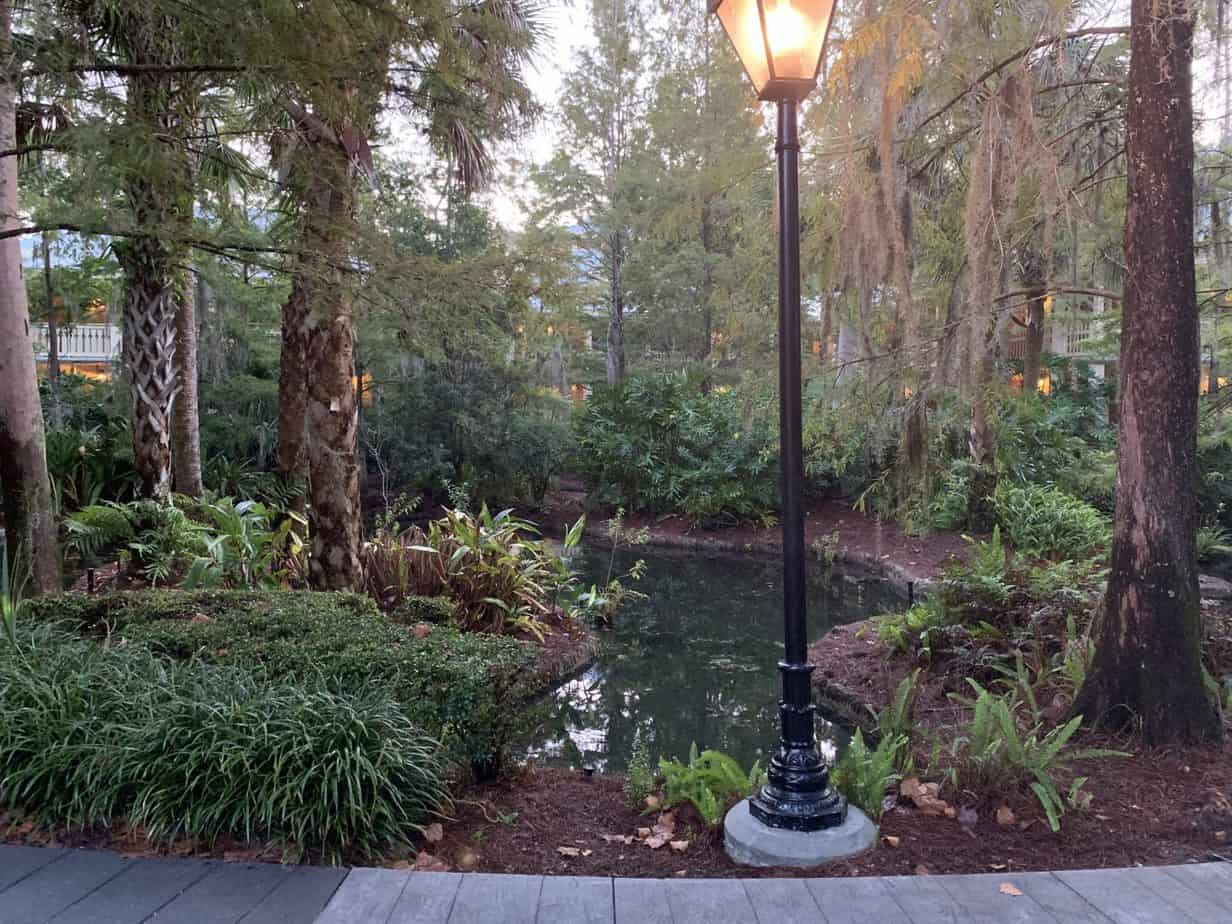 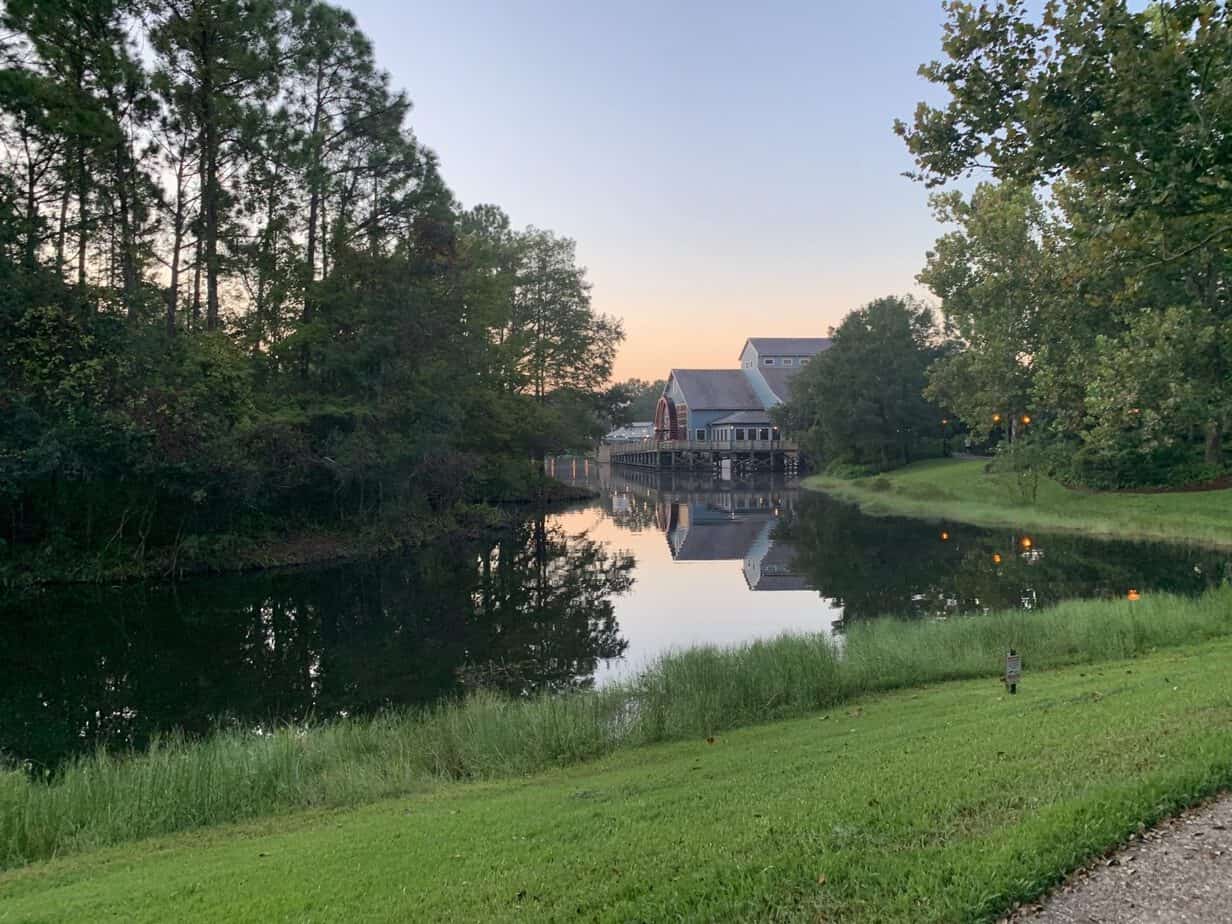 We decided that we would order a Lyft (similar to Uber) this morning due to us having a breakfast reservation inside Magic Kingdom at Crystal Palace.  The Lyft came quickly once we navigated the collection point, and off we went, taking around 7/8 minutes.  We got dropped off at Contemportary Resort and walked a couple of minutes along the walkway to the entrance to Magic Kingdom.

Taking seconds to get through security, we then all scanned our magic bands for the first time to gain entry – we were actually here!  We spent some time with a Photo Pass photographer at the entrance taking photos, and then walked into the park.  It was a glorious clear day – exactly how I imagined.  And when we saw the castle, I did shed a tear – it’s normal right!? 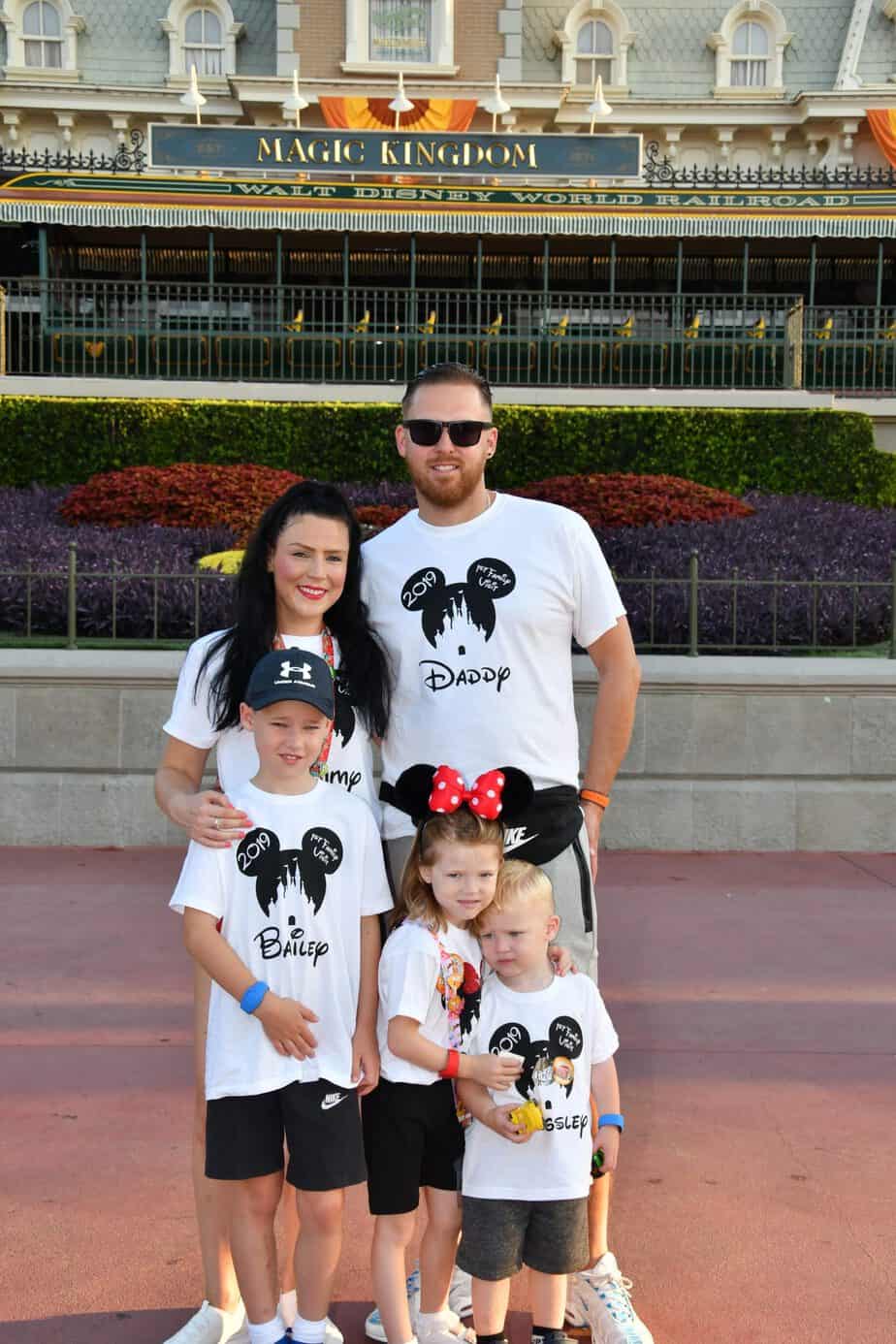 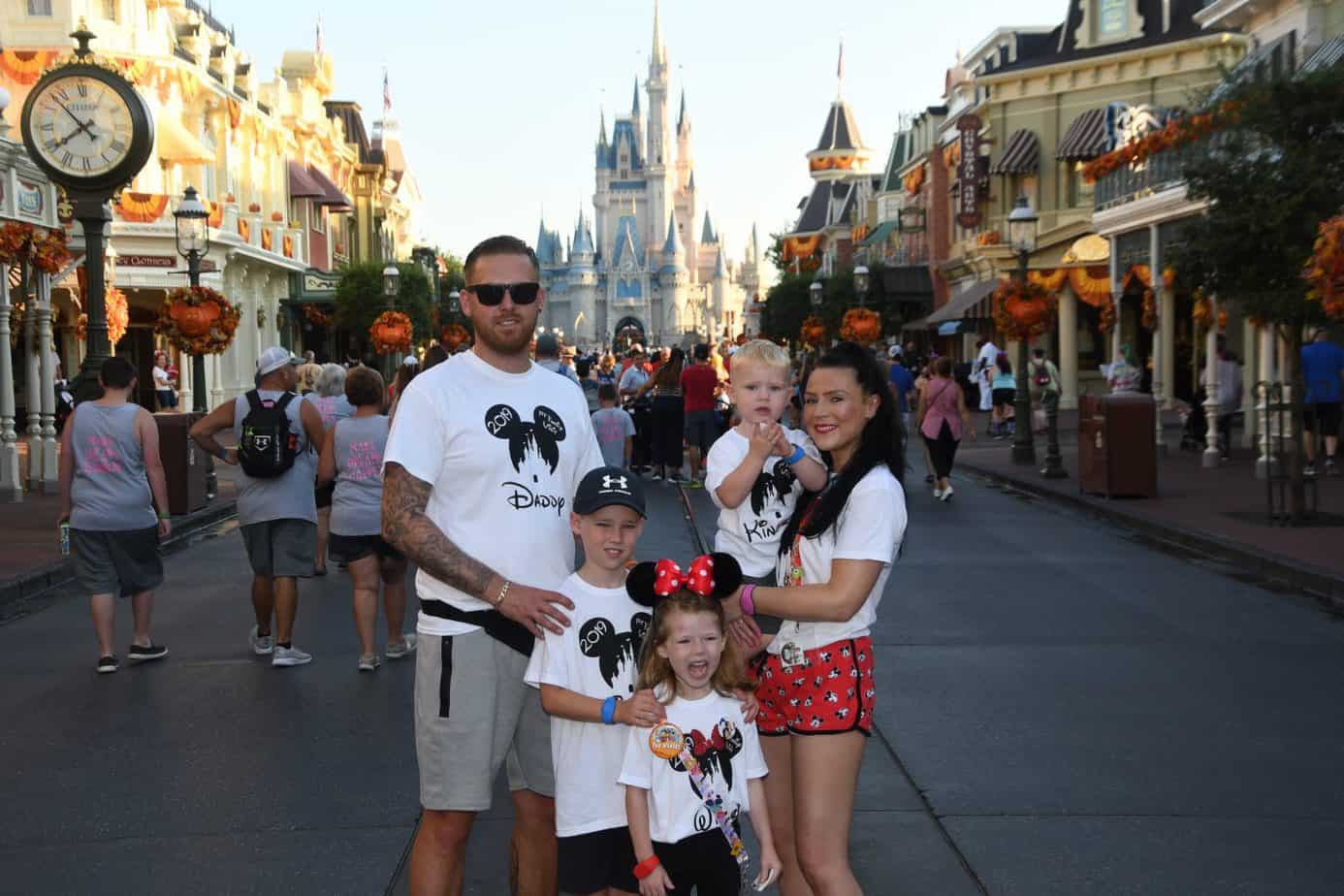 Our breakfast reservation was for 8am and it was nice and quiet, yet still had a great atmosphere.  This was a character breakfast and was included as a table service credit in our dining plan.  Our server was an absolute dream and was the perfect host to begin our holiday – she was just wonderful!  Matt and I each ordered a bellini (included in the meal plan) and as this was a buffet, we all helped ourselves to what tickled our fancy. 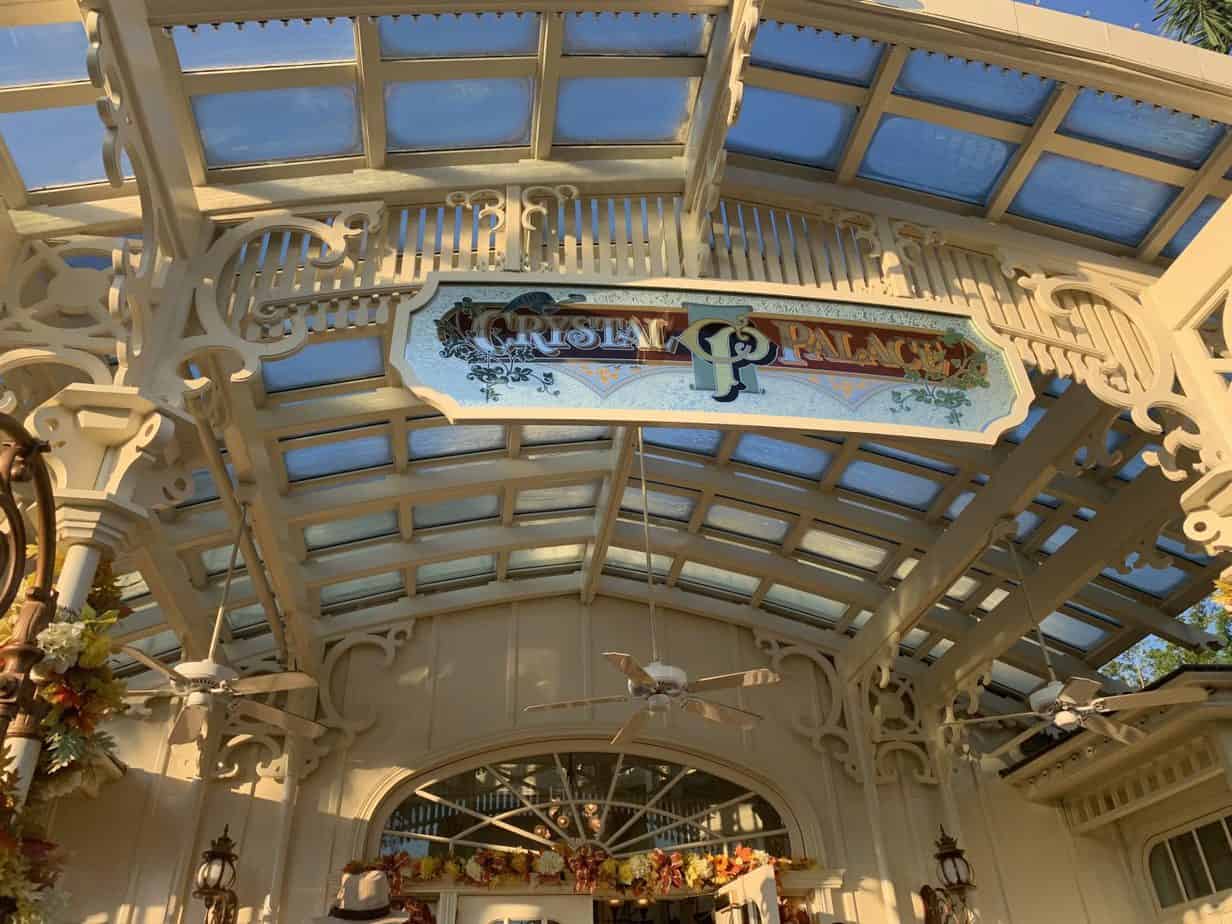 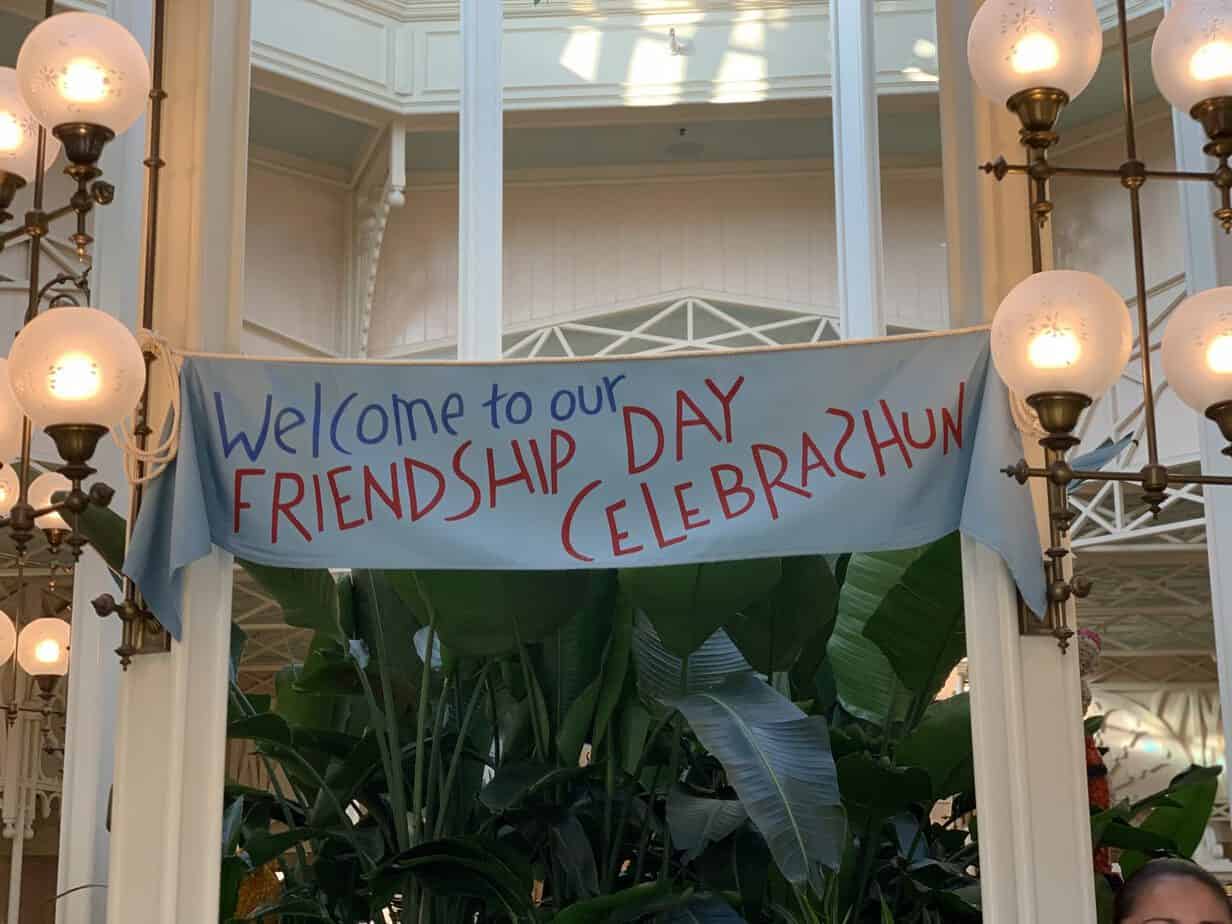 We were treated with delights such as Mickey waffles, pancakes, fruit and yoghurt, breakfast pizza, several types of meats and sausages, banana bread pudding, eggs, bacon, pastries, grits, biscuits and gravy – there was a great selection and the food was warm and delicious.  The kids love going back and forth choosing their food.  They love cereal so the highlight for them was fruit loops and the waffles! 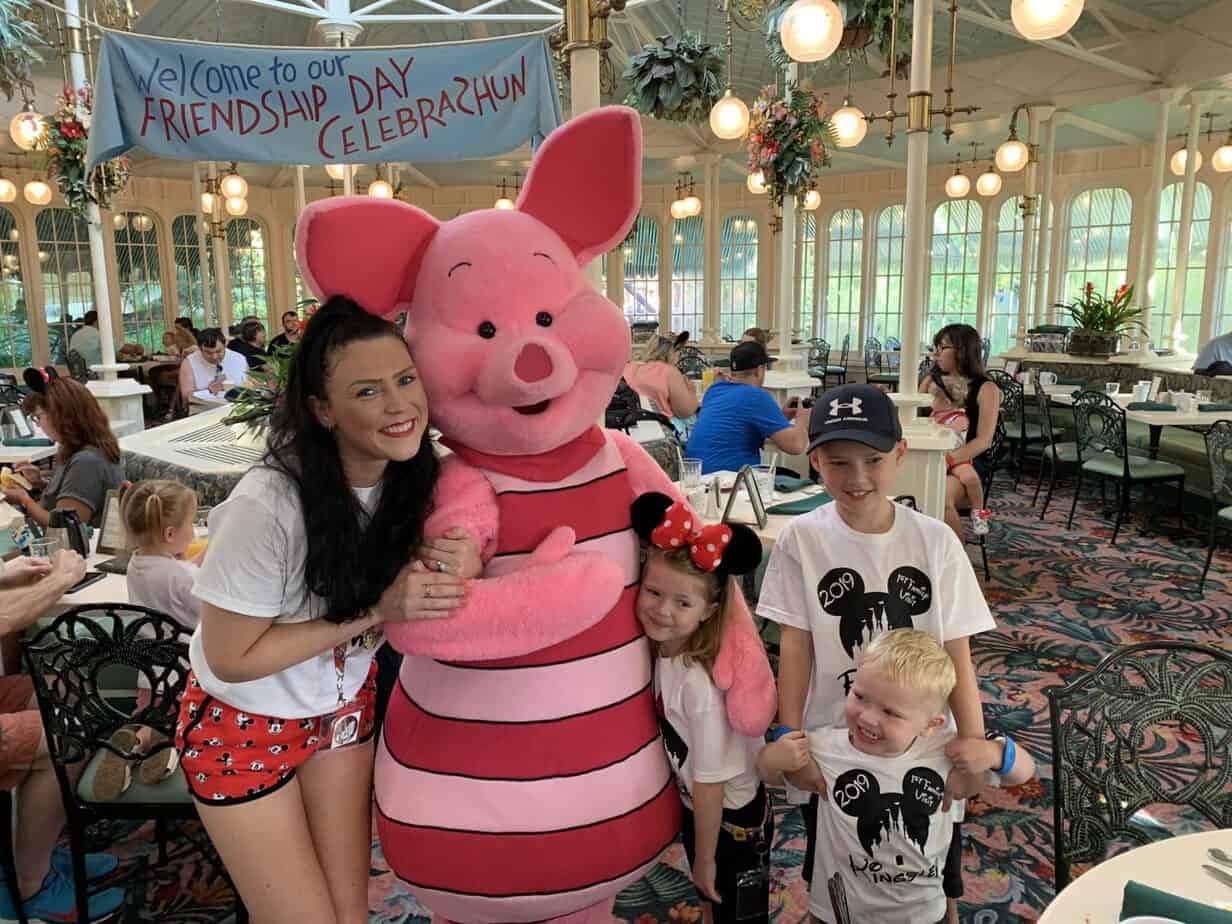 As this was a character breakfast, we got to meet Winnie the Pooh, Piglet Eeyore and Tigger.  Make sure you have your autograph book ready (unlike us as we had to dash to the nearest store to buy one!)  the characters were great and the kids were really happy and excited to meet their first characters of the holiday. 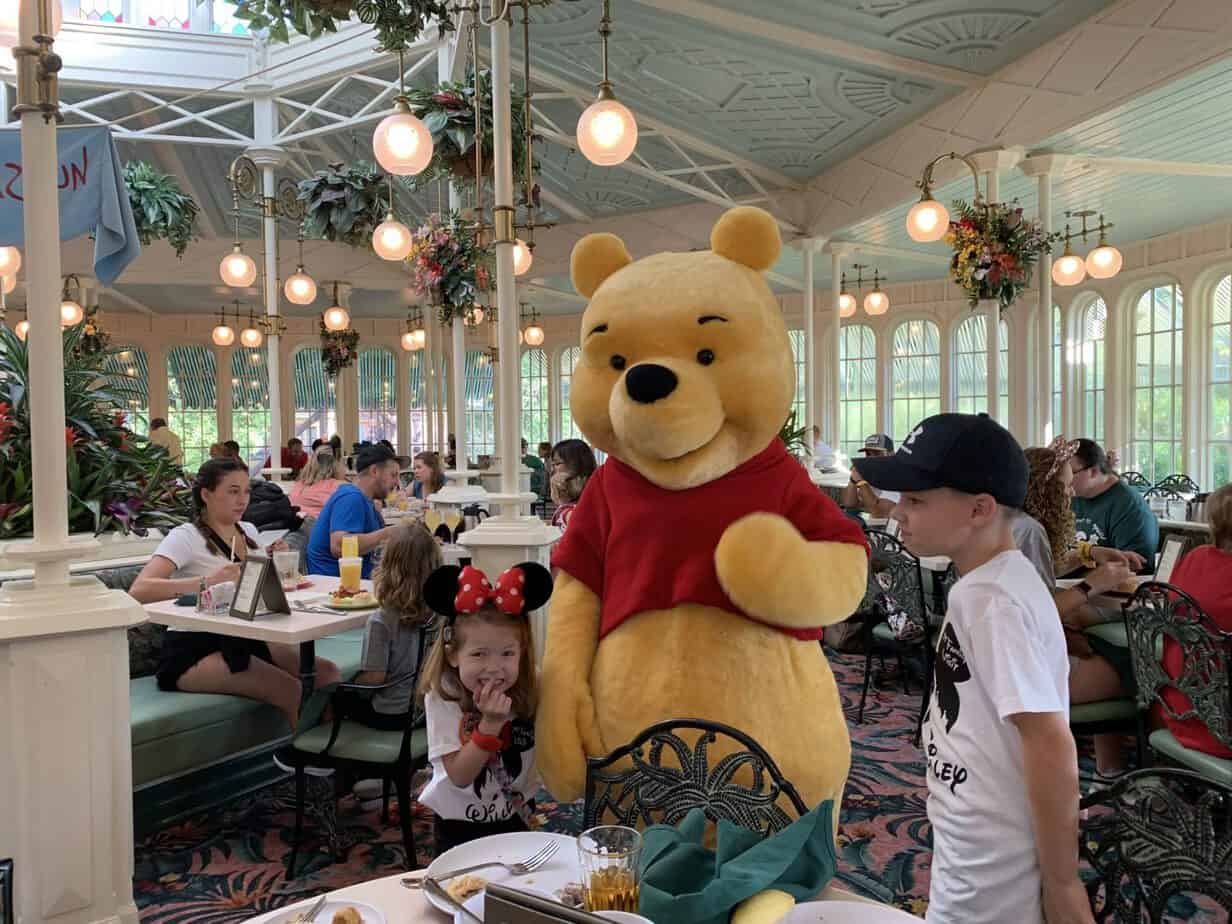 Our meal took about 1 hour 15 minutes so it wasn’t too long, but still no way rushed.  At around 9.15am we decided to head over to Adventure Land as this is where our first fastpass ride would be soon.  It was still very quiet and as we walked through Adventure Land and into Frontier Land, we saw that the wait for Splash Mountain was only 10 minutes.  Matt and the older too went off whilst I stood at the drop taking numerous photos and videos of other people on the ride until they eventually went down the big 15 metre drop – Yikes!

You can’t quite see Missy on the photo but she is there! 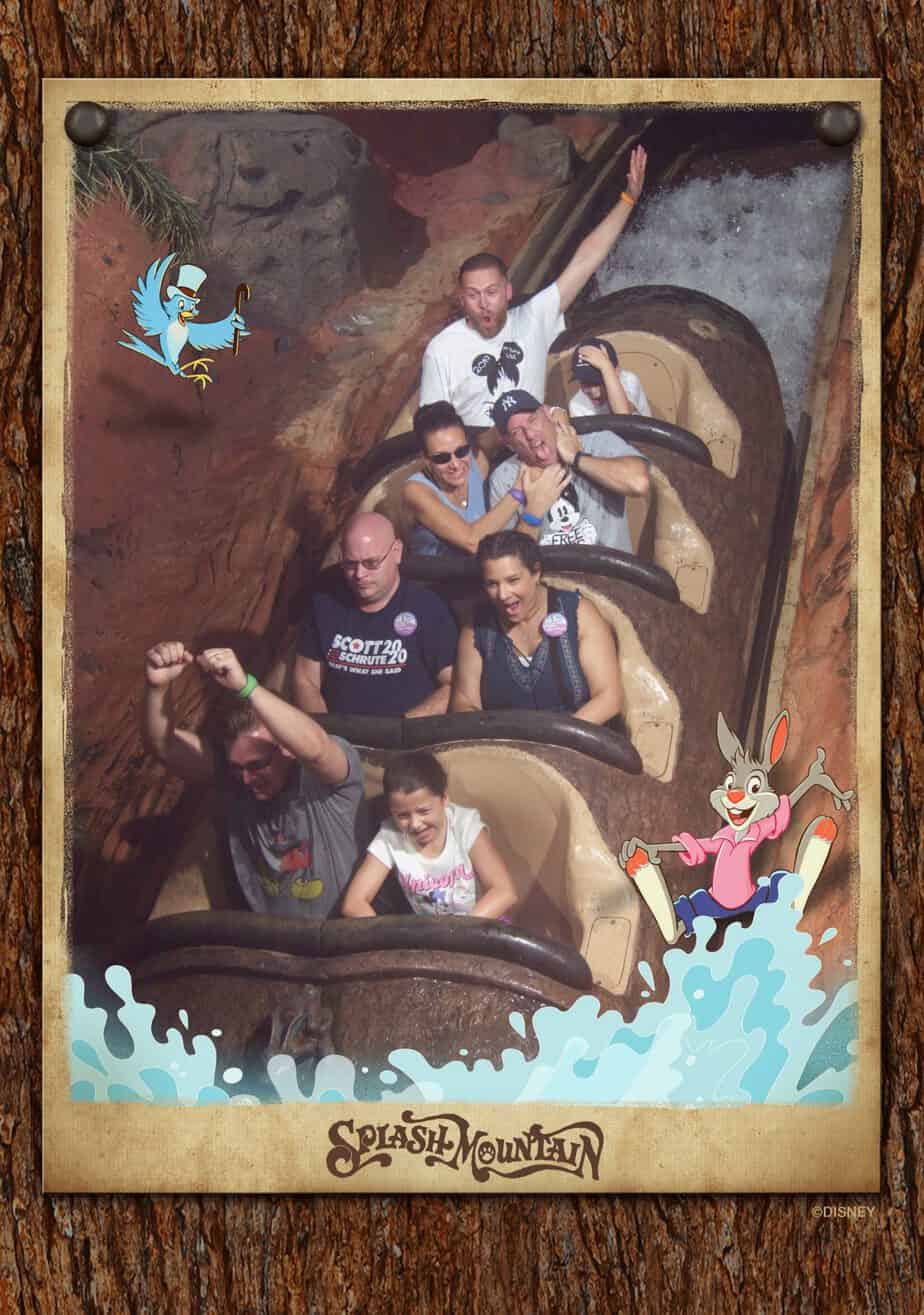 We then headed back into Adventure Land and rode Pirates of the Caribbean.  It’s a great ride, but we all thought the Disneyland Paris Pirates ride is better! 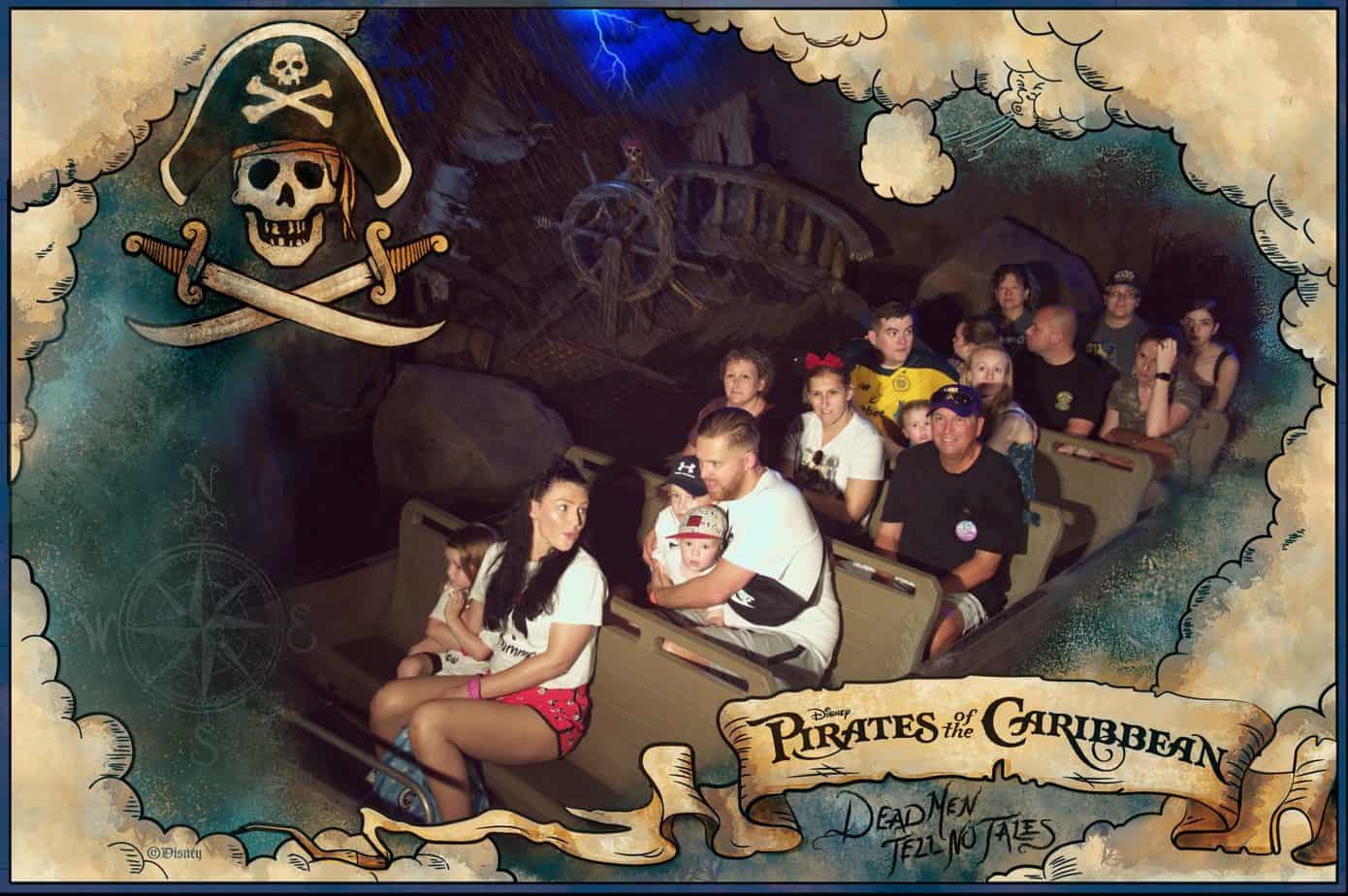 We had our first Fastpass at 10am (each Fastpass window is open for 1 hour) for Jungle Cruise.  This is a great family ride where you are on a boat with a Skipper who takes you through the jungle.  The Skipper is always a little bit naughty, and there is always plenty of humour! 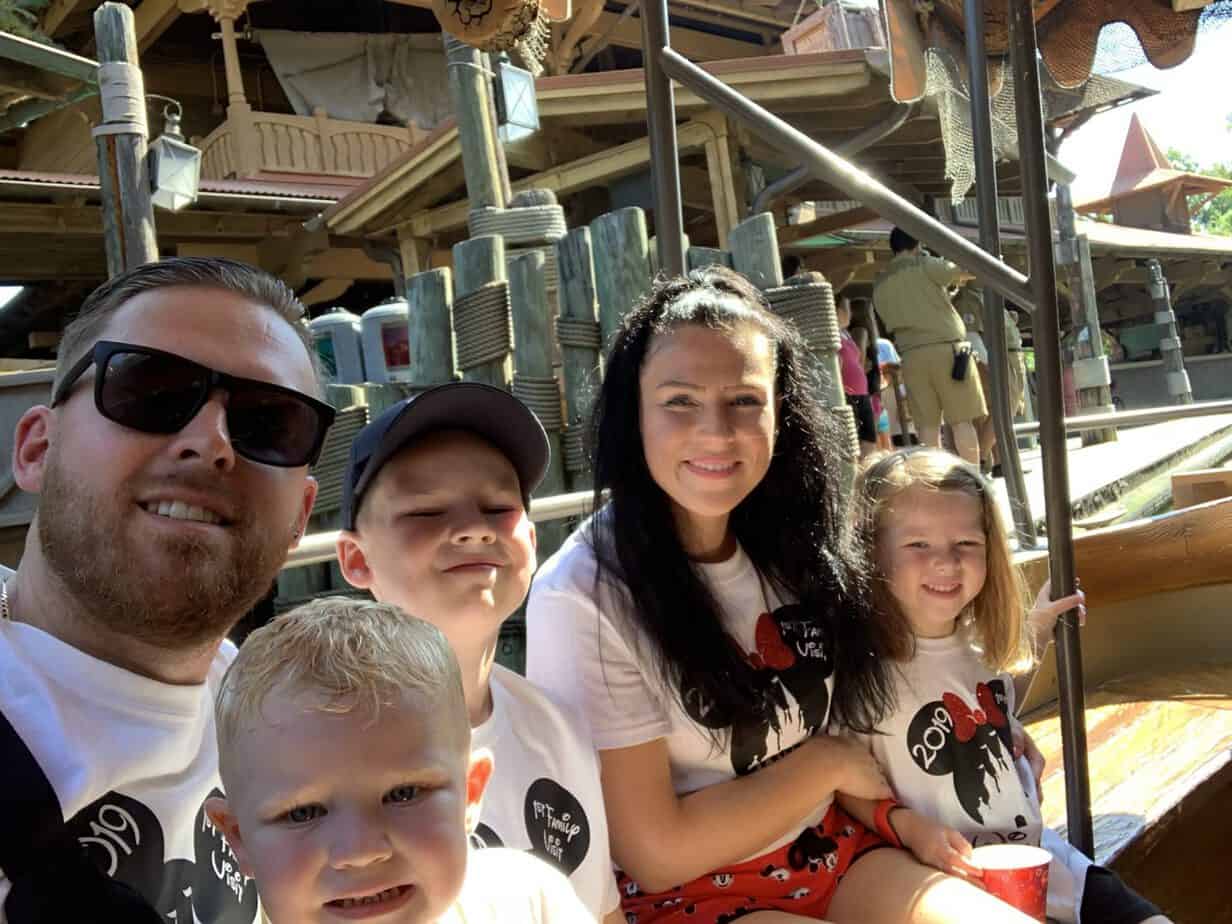 We then rode Magic Carpets of Aladdin which is a nice family ride, before taking another walk through Adventure Land and stopping off for some iced water along the way (free at many food points around all the parks and is a life saver!)

One of the many shows that are scheduled in Magic Kingdom is Move it! Shake it! MousekeDance It Street Party!  We happened to be wandering around Cinderella’s Castle area where the parade began, so we watched some and joined in with some dancing! 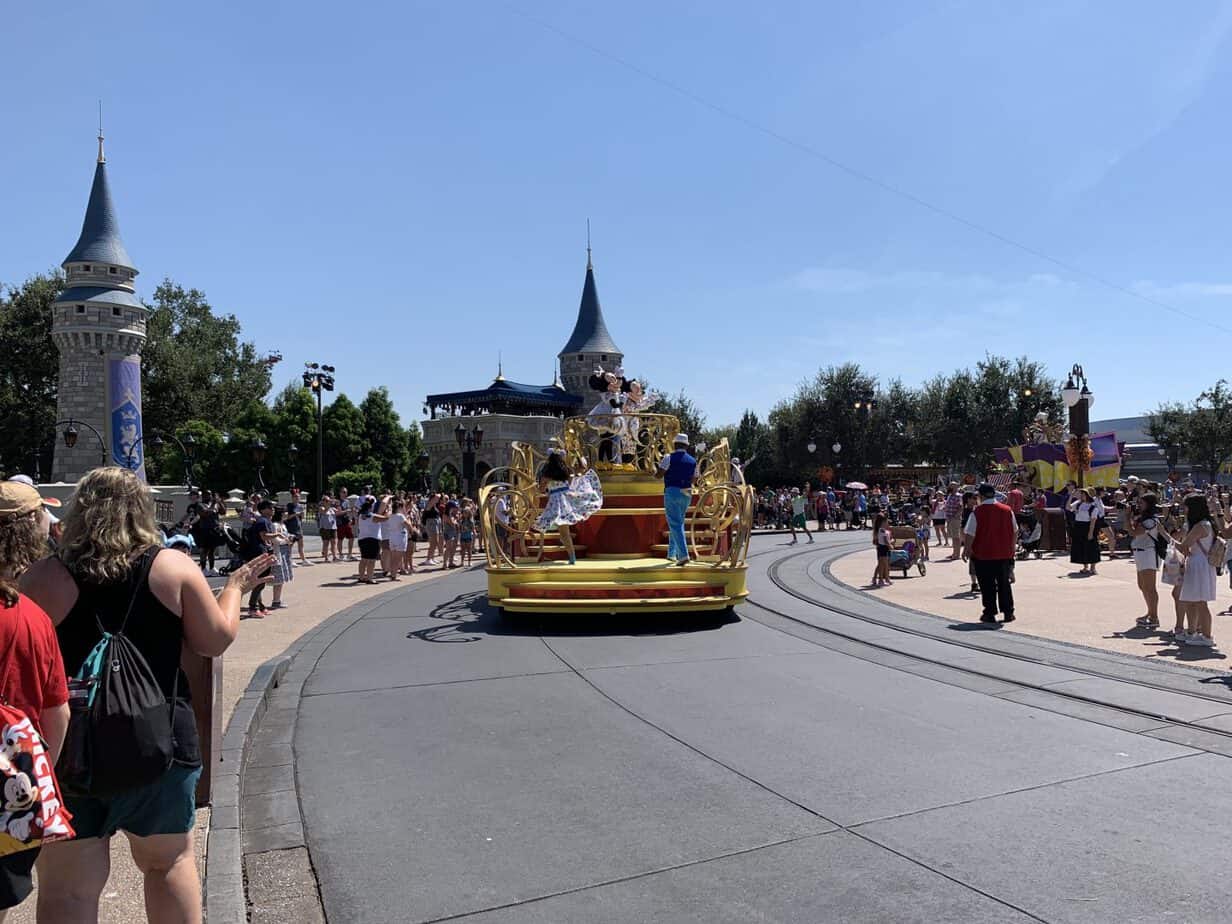 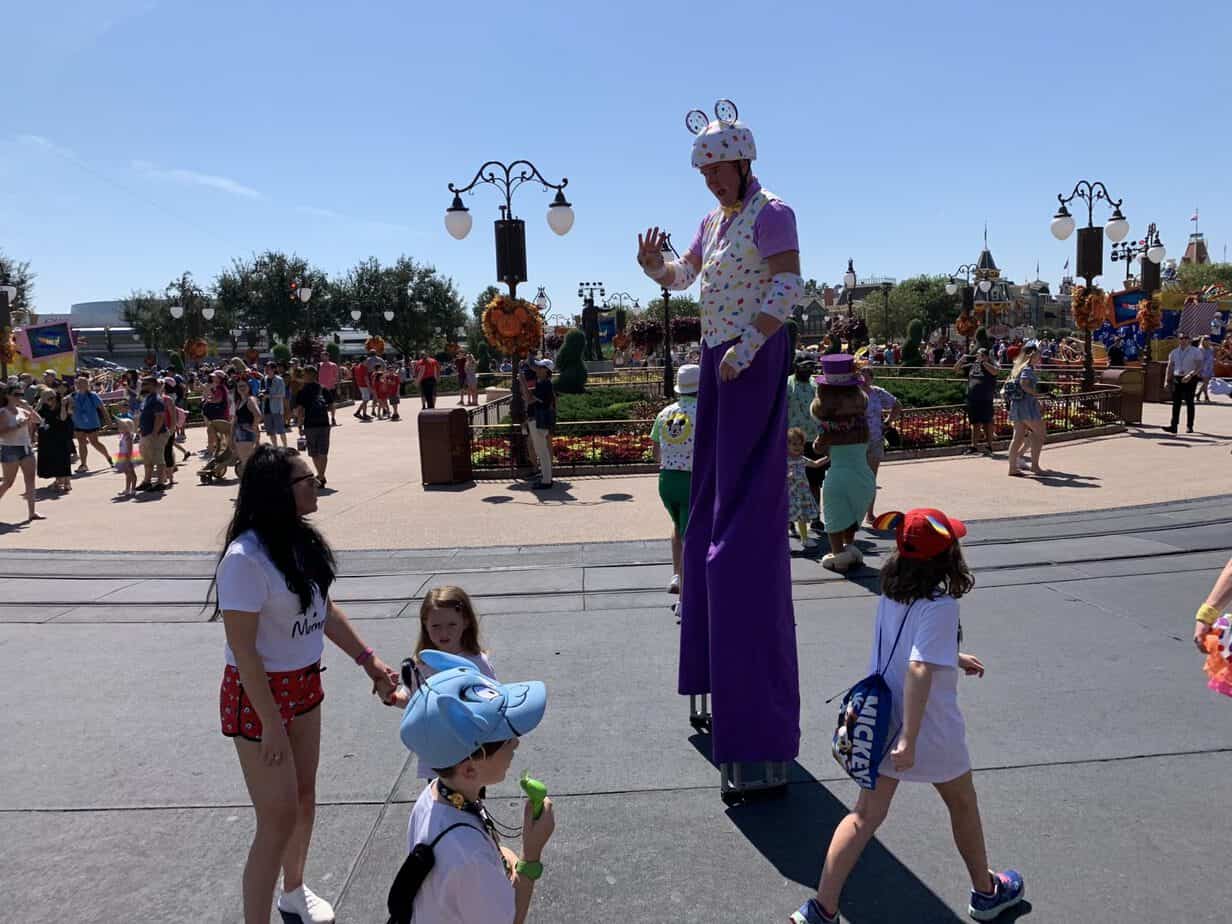 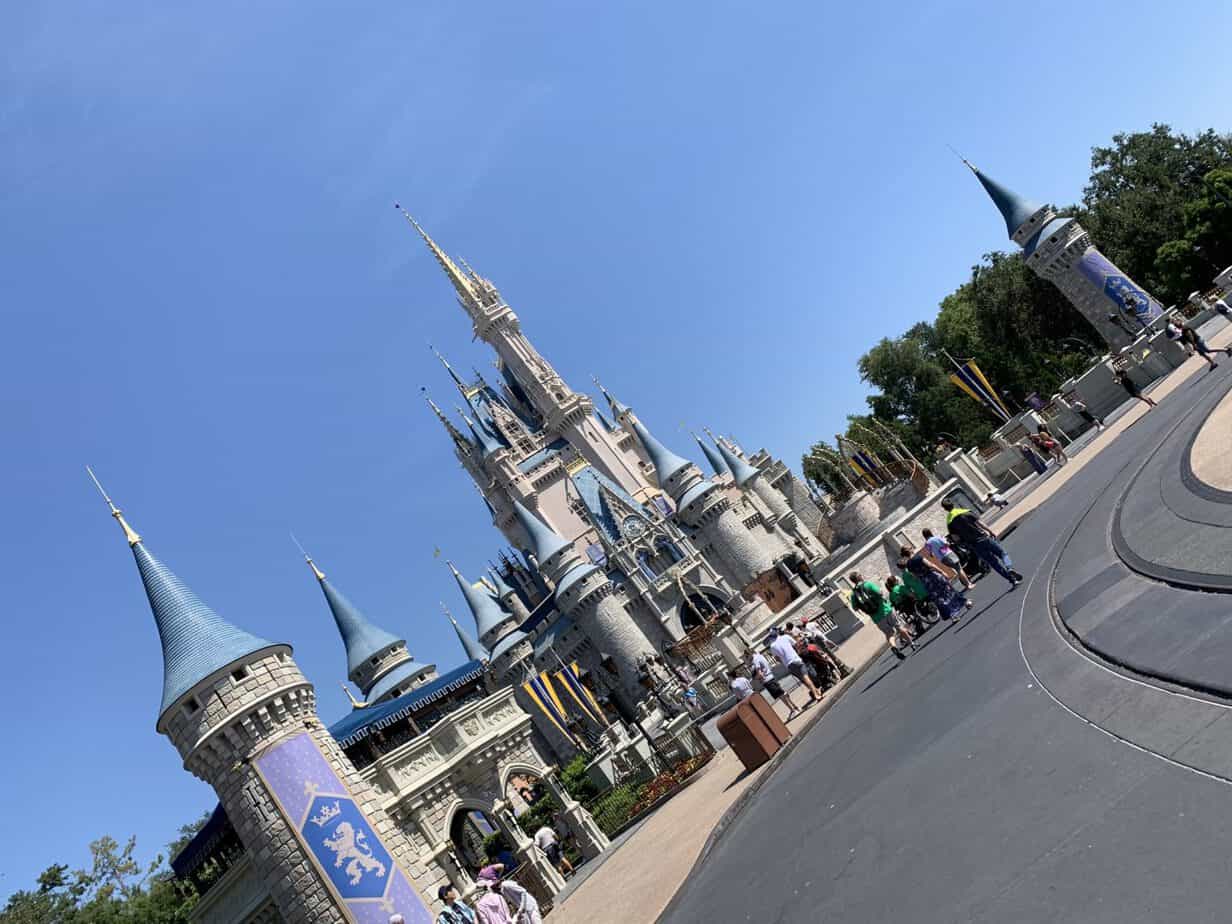 I remember a similar show when we visited Disney California and its great to see this parade show still making the rounds!  Any excuse to dance!

After our last prebooked Fastpass on Peter Pan (my favourite ride but Disneyland Paris Peter Pan holds my heart!), we took a stroll over to Cheshire Cat Cafe next, which is located in Fantasy Land near the Mad Hatter Tea Cups. This was a food location that I knew they had some ‘must try’ drinks and snacks.  As we were on the Disney Dining Plan, any food or drink marked with a ‘DDP’ sign was included, so we went all out and ordered 5 Wonderland Slushes!  The frozen drink is made up of Minute Maid Raspberry Lemonade, Fanta Grape and served with a hard strawberry candy straw! 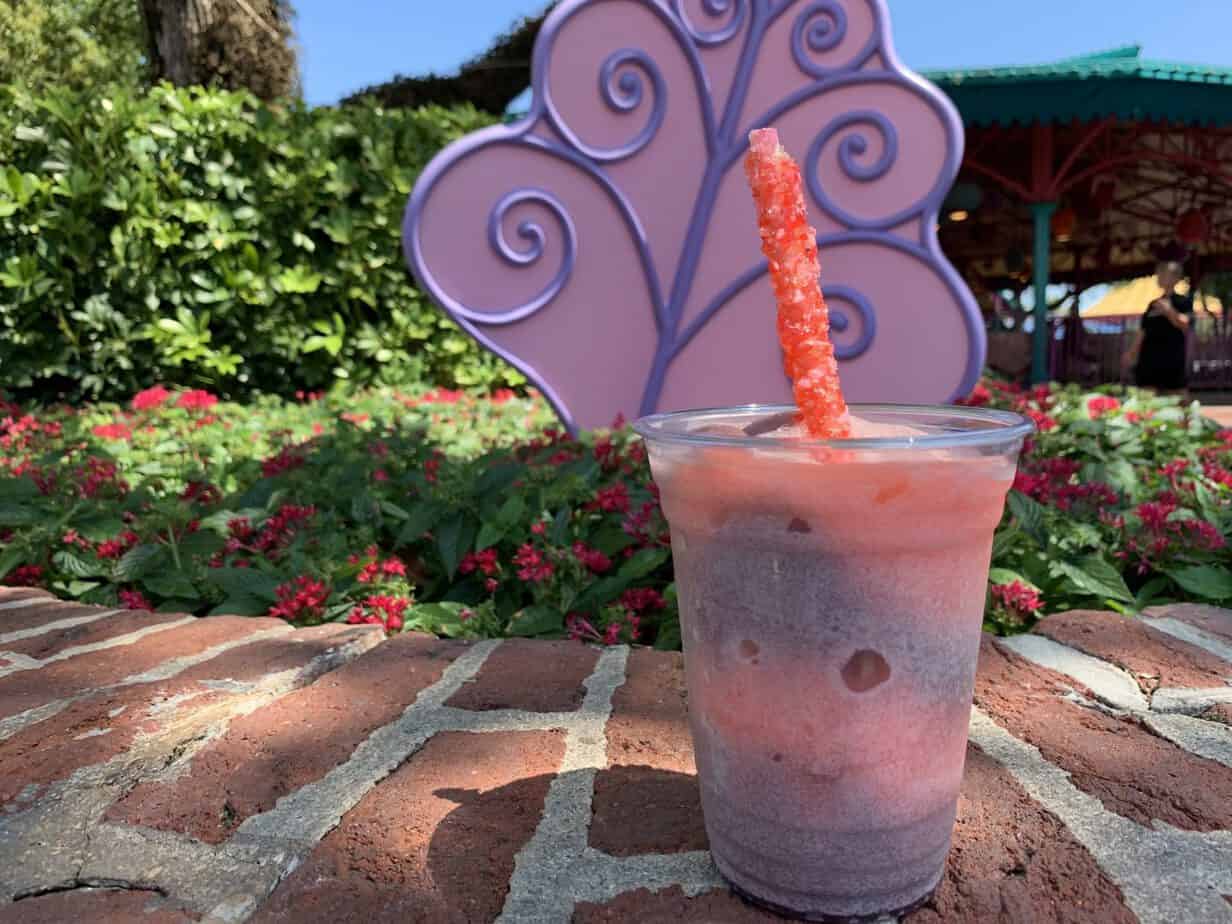 It was very delish, but in hindsight I should have just got two and shared!

By now we were feeling pretty pooped and it was B.O.I.L.I.N.G so after a last walk through FantasyLand and spotting the ever so popular Tangled Toilets (I know!) we headed back to the bus depot to drop us back to Port Orleans Riverside.

We decided to spend the rest of the afternoon taking in the sights of the resort and spending a couple of hours by the pool.  The kids were desperate to get in the pool and take on the water slide.  Even Baby K loved it!  The pool scene is top notch here.  There is a total of 6 pools at Port Orleans Riverside, with the main pool called Ol’ Man’s Island being the central hub.  This pool is actually on an island and consists of a main pool and baby pool, as well as a hot tub and slide.  There is also a children’s play area and Muddy Rivers, the pool bar. 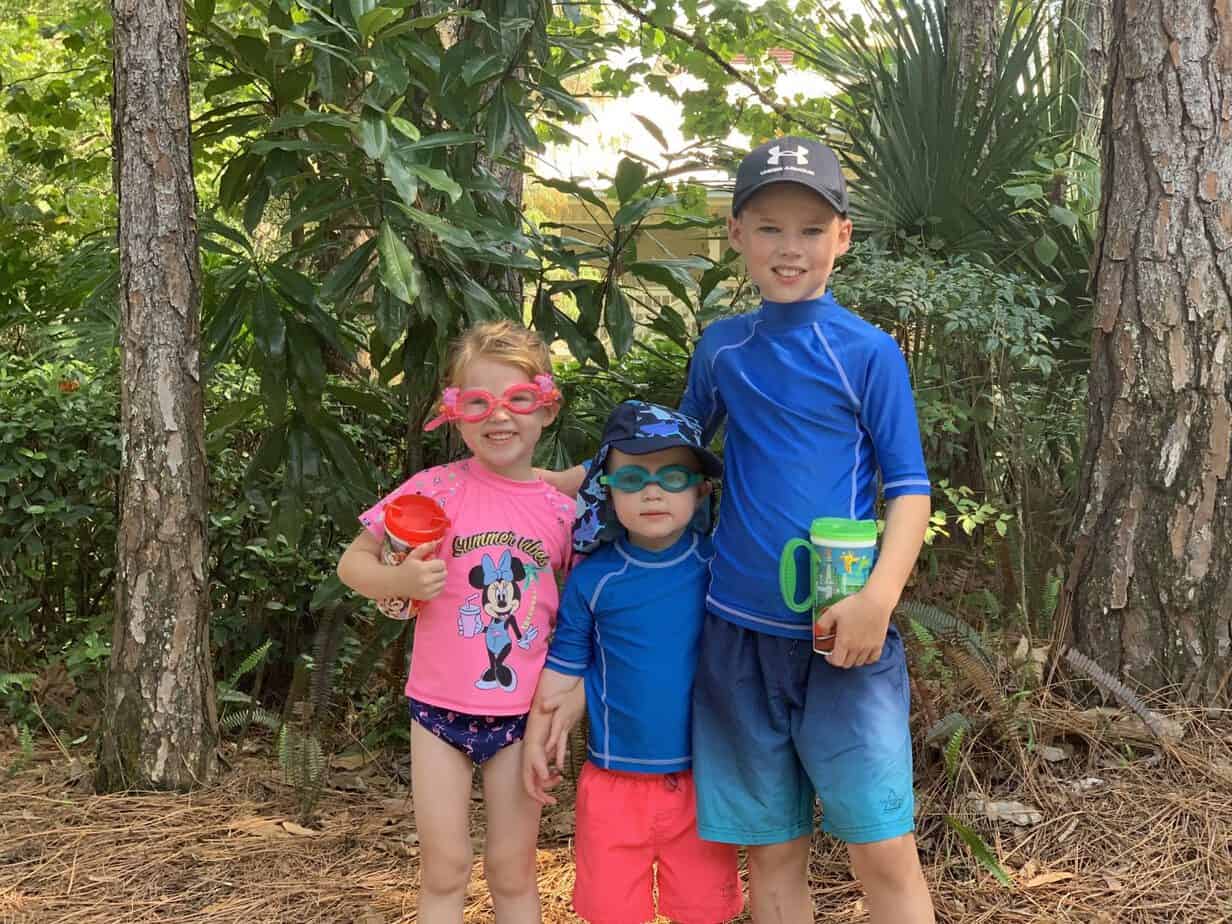 We had filled up our resort mugs with are chosen drinks (which are included on our dining plan) and soaked up the atmosphere.  Each afternoon there is a host of pool activities and it was great to see a few games going on. 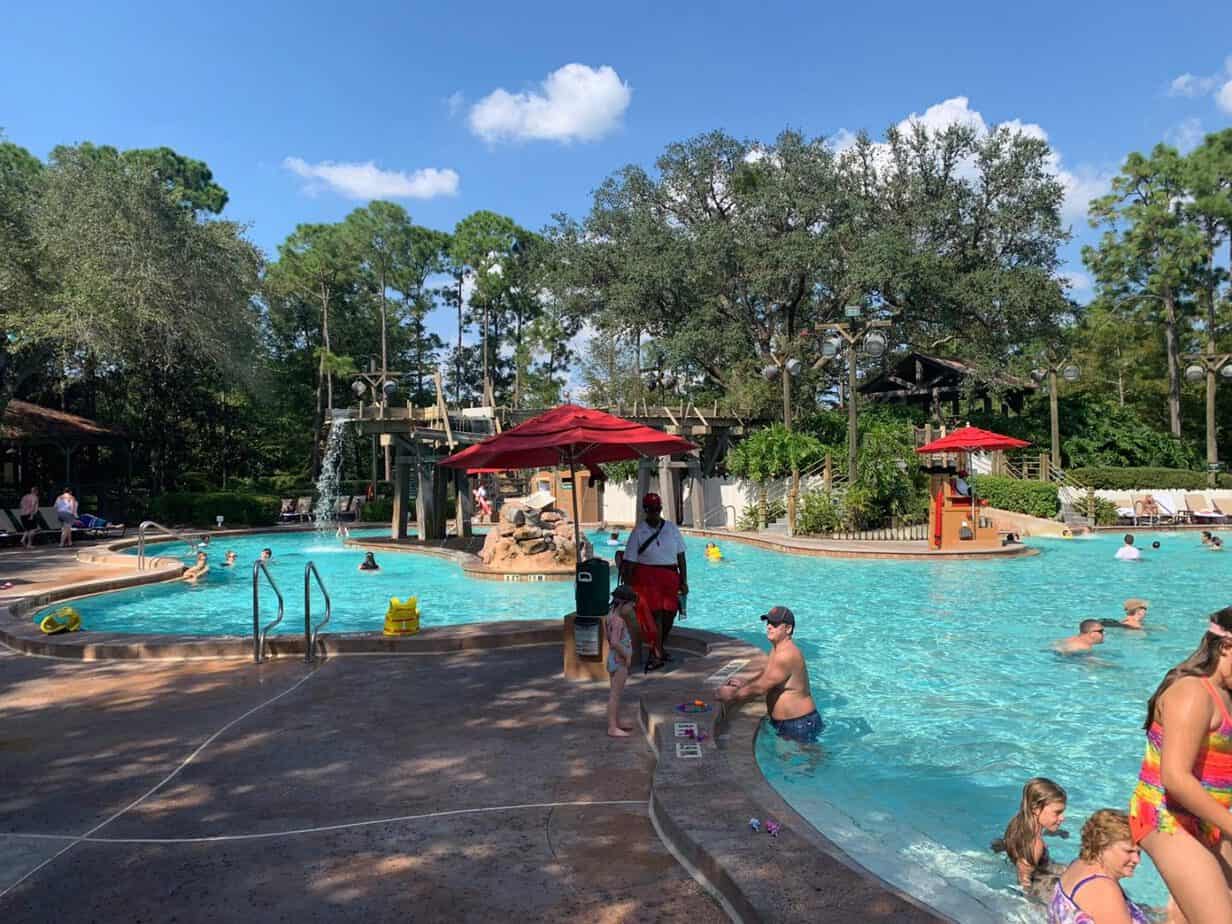 After showering and freshening up, we decided to extend our evening by taking the boat over to Disney Springs.  Disney Springs is home to a range of restaurants and shops and Port Orleans Riverside is only a 10 minute boat ride away!  The younger two were tired and were asleep in the pushchair before we even arrived!  So we took a quick look around some of the stores and grabbed a taco and nachos from one of the street food trucks! 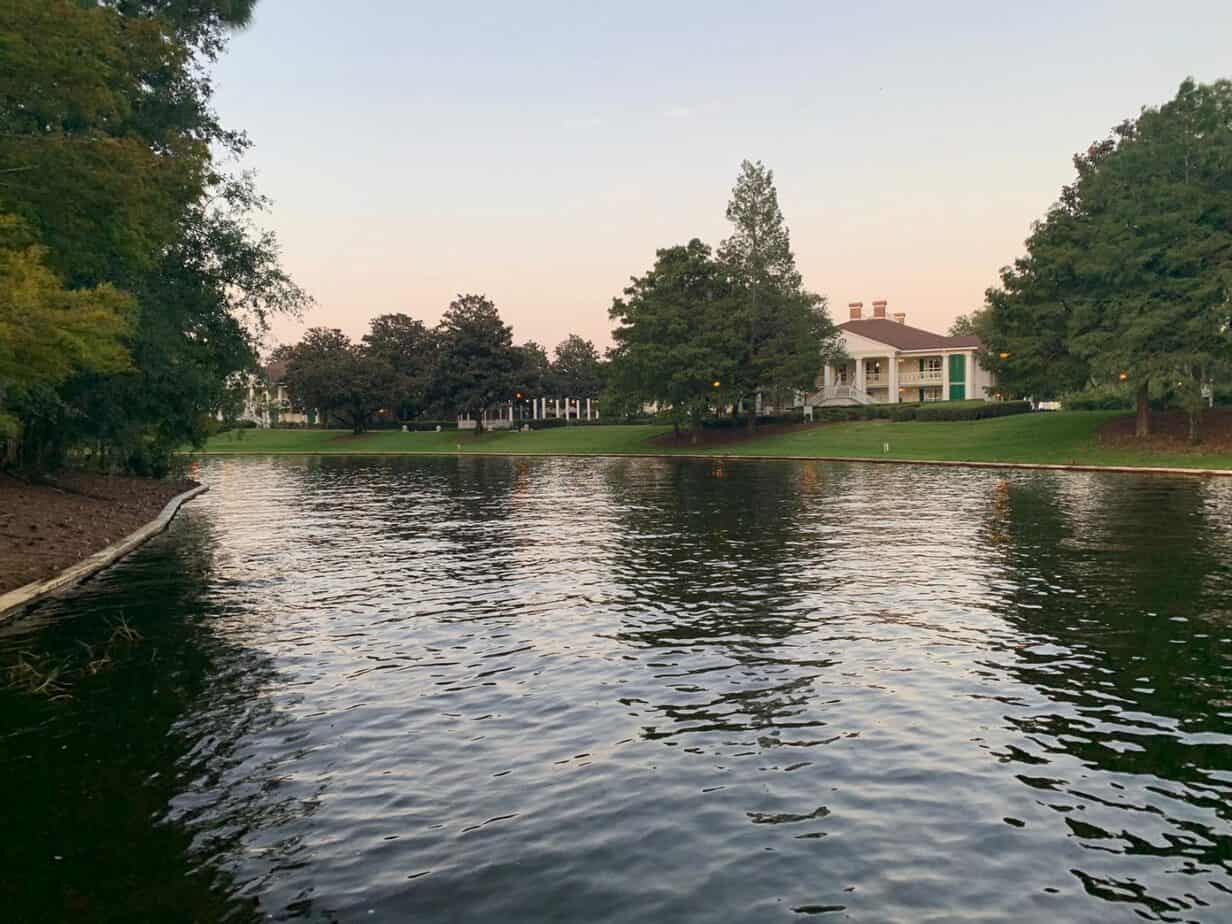 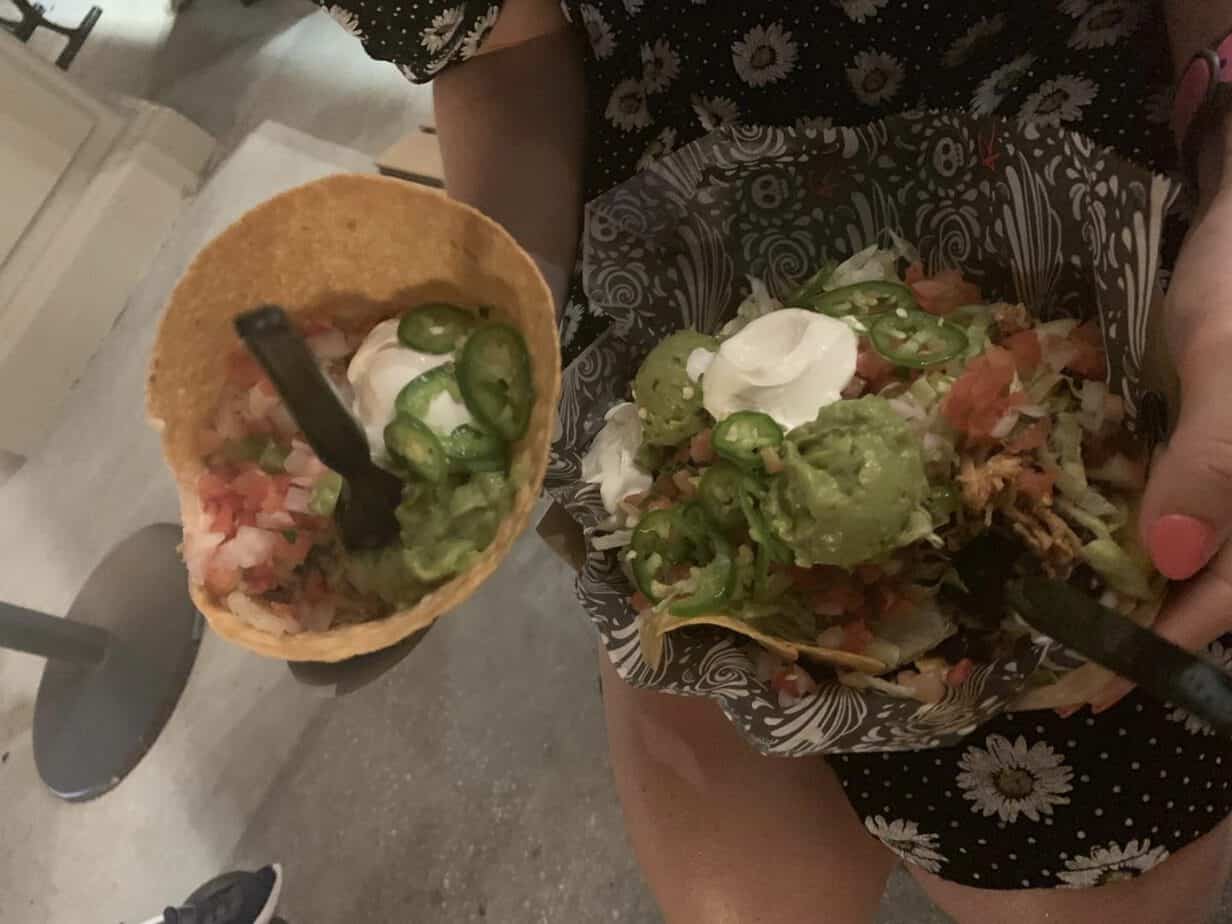 What an amazing day!  Tomorrow is a day at Animal Kingdom…

4 adventure Stag Do Ideas for The…