Today we had scheduled in a day at Animal Kingdom and I was so excited to see the Tree of Life again!  We didn’t get up quite as early this morning, and took our time getting ready.  Matt visited the Riverside Mill (Port Orlean’s Quick Service restaurant) whilst we were all getting ready to grab some breakfast and we all enjoyed Mickey Waffles and Cinnamon Buns in bed!

The bus service to Animal Kingdom is as regular as all the other parks, and is perhaps the furthest park away from our resort.  Leaving the last depot (reception area) it takes about 12 minutes on the bus.  Baby K didn’t seem himself today and was a little off colour.  However it didn’t spoil the fun and off we went into the entrance of Animal Kingdom! 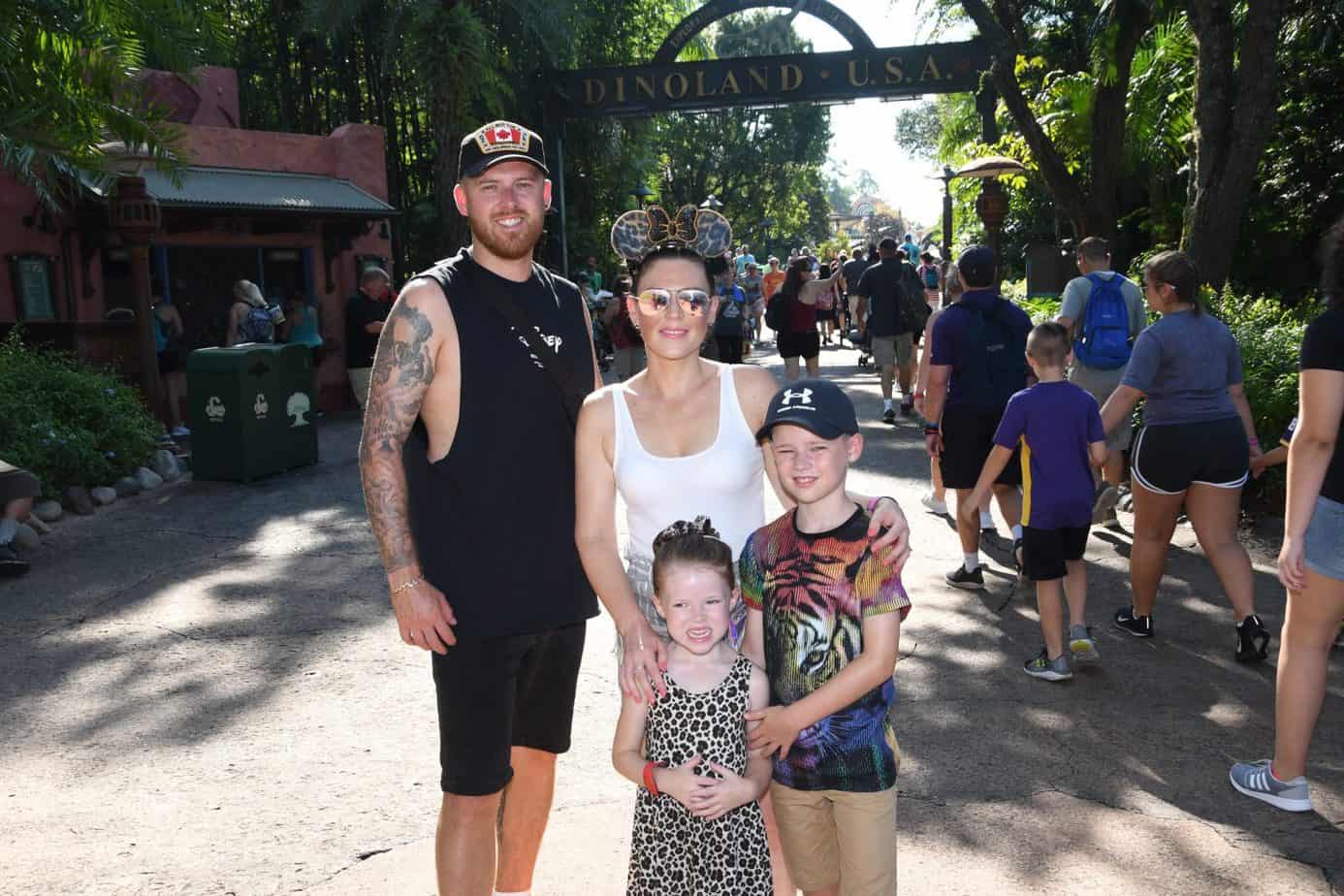 As in all the parks, park maps are located as soon as you have passed the magic band turnstiles (we grabbed a load for memories!)  We then headed towards the Tree of Life and took some photos, before we met Kevin from Up! 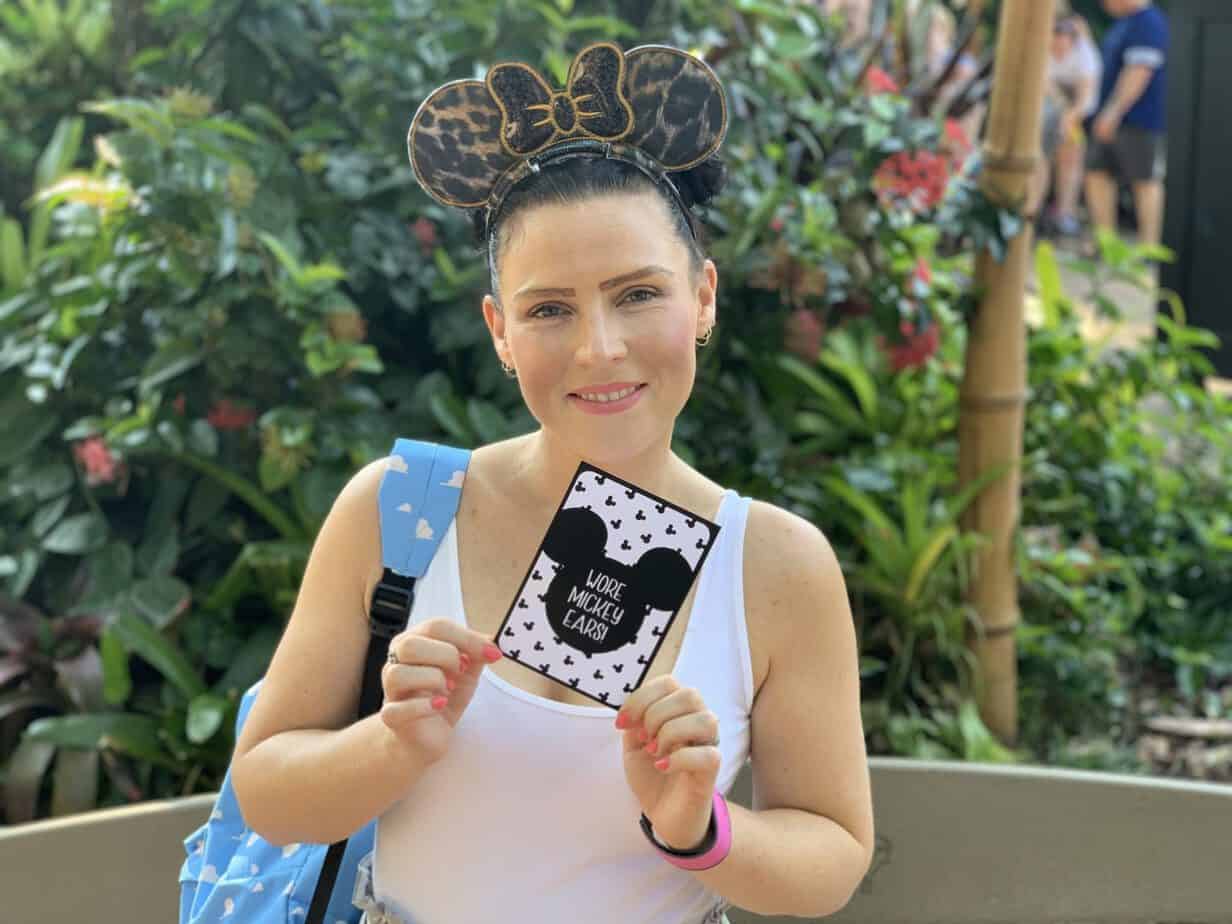 Our first Fast Pass of the Day was for Dinosaur.  I remember this ride so well back from when I visited in 2004 and was really looking forward to it.  So we headed to DinoLand and upon entry into the land we saw LaunchPad McQuack with no line!  So we met him which the older two enjoyed and then off we went to ride Dinosaur (Baby K was a little poorly and stayed in his pushchair asleep!) 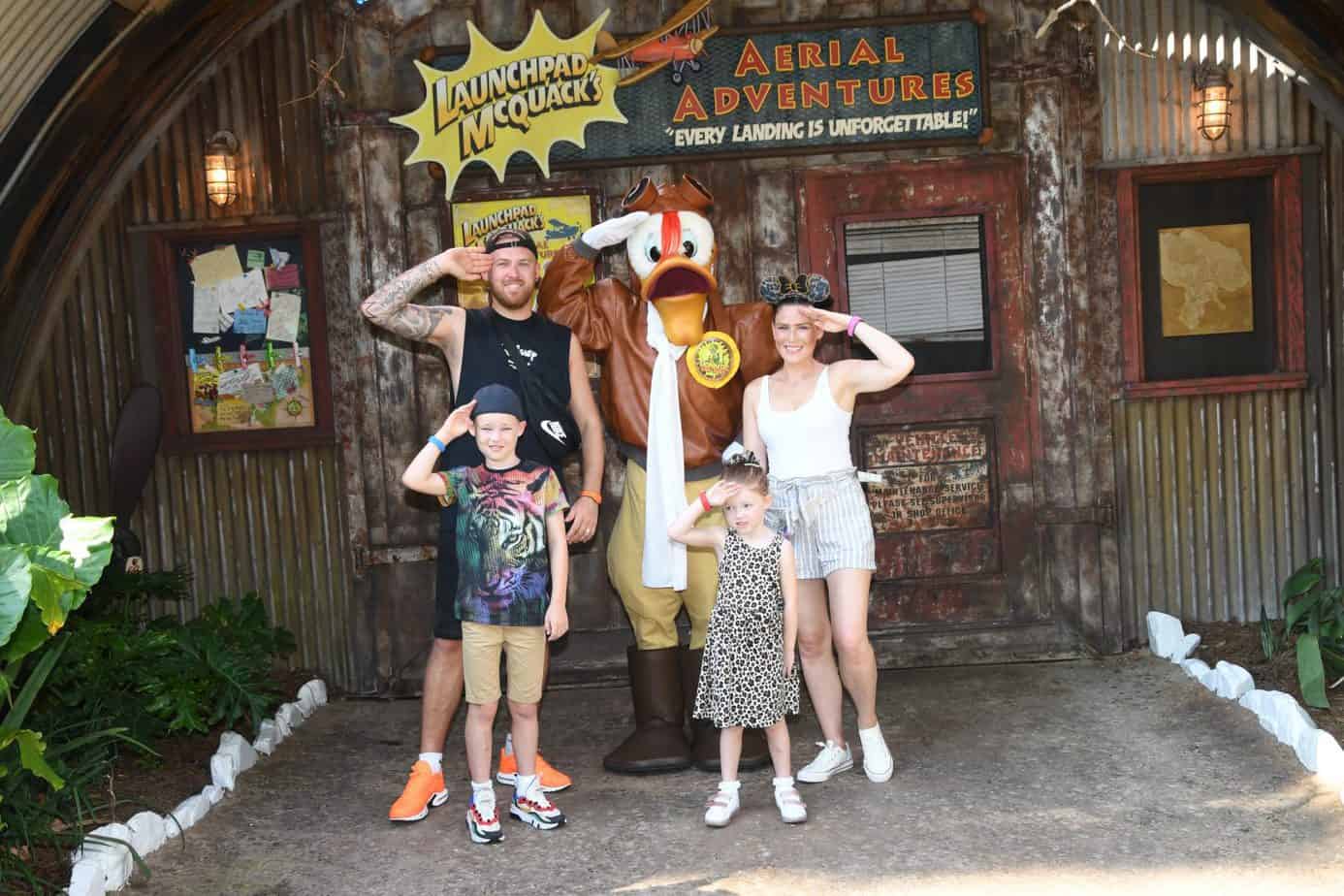 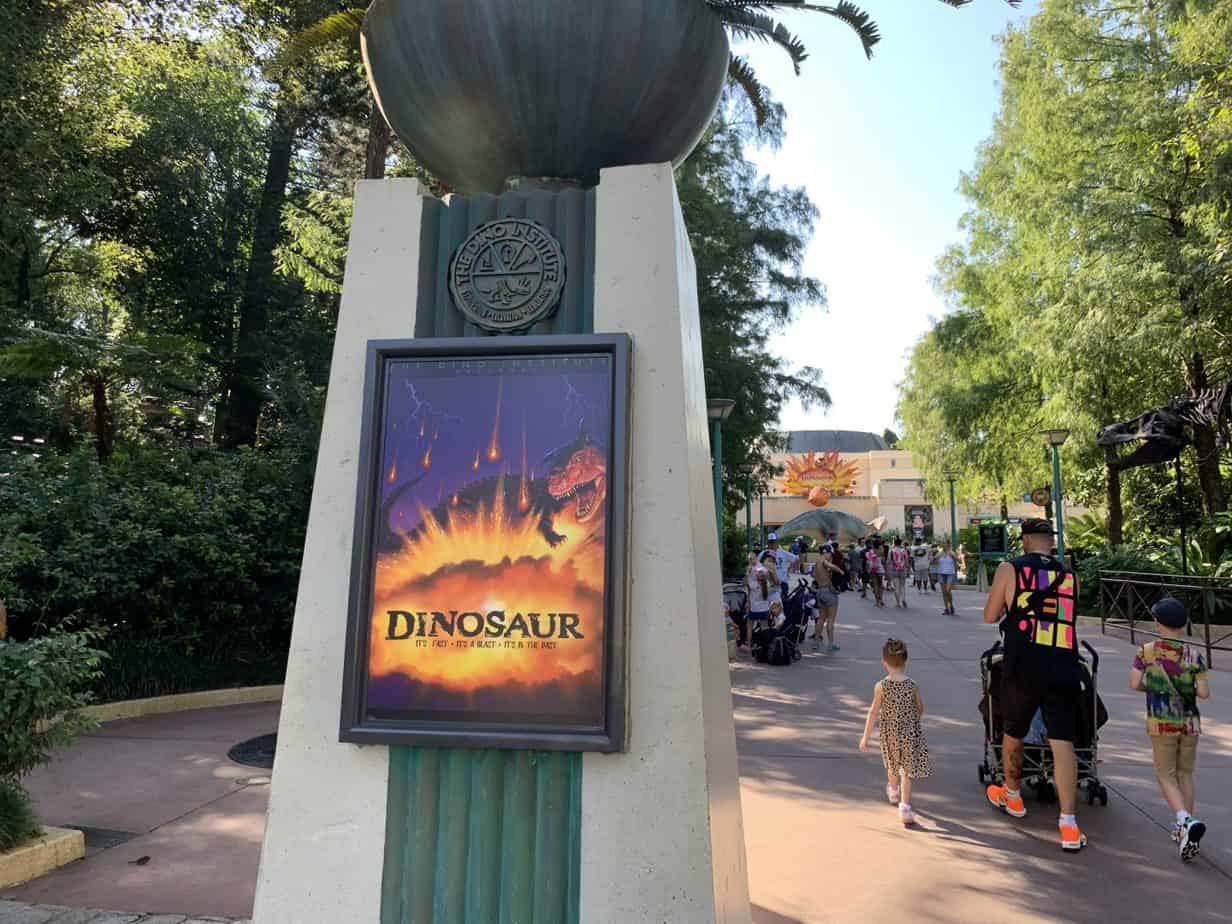 Baby K was too short and thank god he was – wow I forgot how vigorous this ride is!  You are in a car on a mission to find a certain dinosaur, and you may encounter a few friends along the way.  It isn’t a rollercoaster as such, more of a vigorous car ride with shakes, twists and turns.  We happened to be sitting in the back row which I felt may have received more of the jolts and shakes.  Missy squeezed her eyes shut during the whole ride, and even Mr B wasn’t too sure.  I held on for dear life! (It is a super fun ride and we did end up riding it again later on in our holiday!) 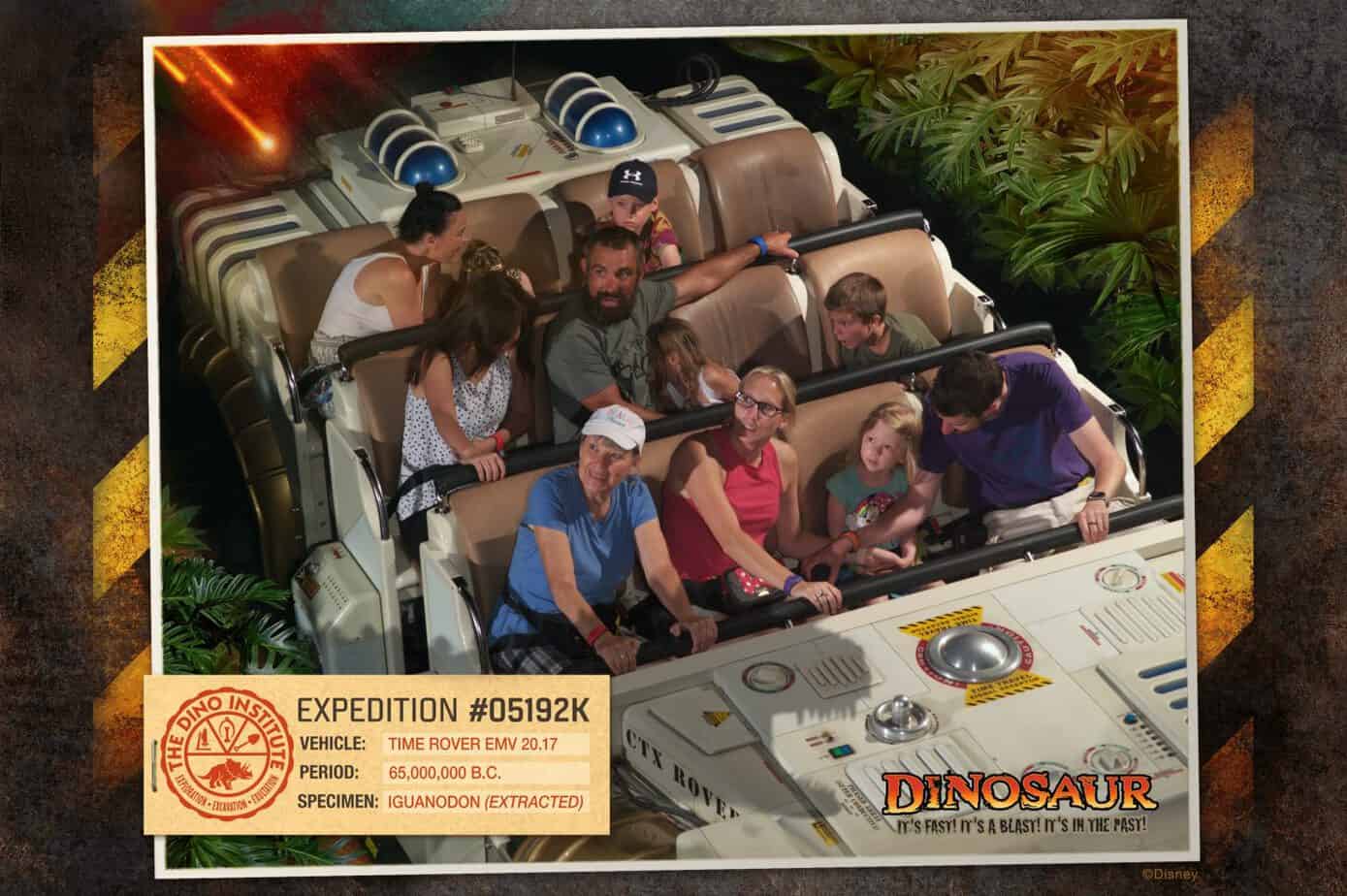 Following our dino experience, we took a walk around DinoLand and the kids were keen to get inside the large play area.  This was a whole host of climbing apparatus with loads of slide and bridges.  Also included is a digging area which the younger too enjoyed (and hooray, Baby K was feeling better!) 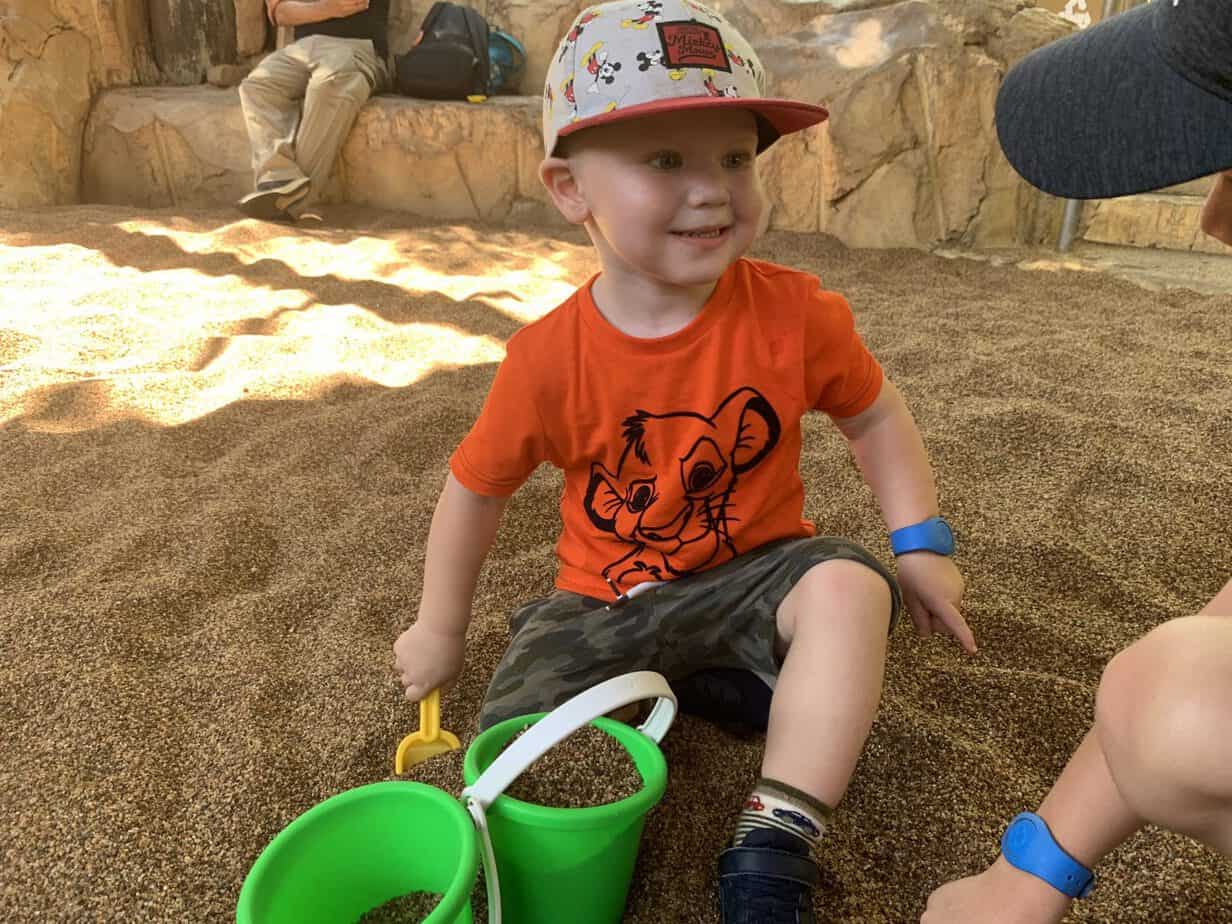 We took a walk along the path towards Asia to check out Mount Everest next.  This is a large rollercoaster that goes both forwards and backwards.  Theres a pretty big drop on this one so I knew I would be opting out.  As we had a fast pass, Matt and Mr B went on it.  Mr B loves rides, but he said never again!

We continued along through Asia and into Africa where the kids enjoyed playing on some drums and we brought some pins for pin trading (and Baby K took another nap!) 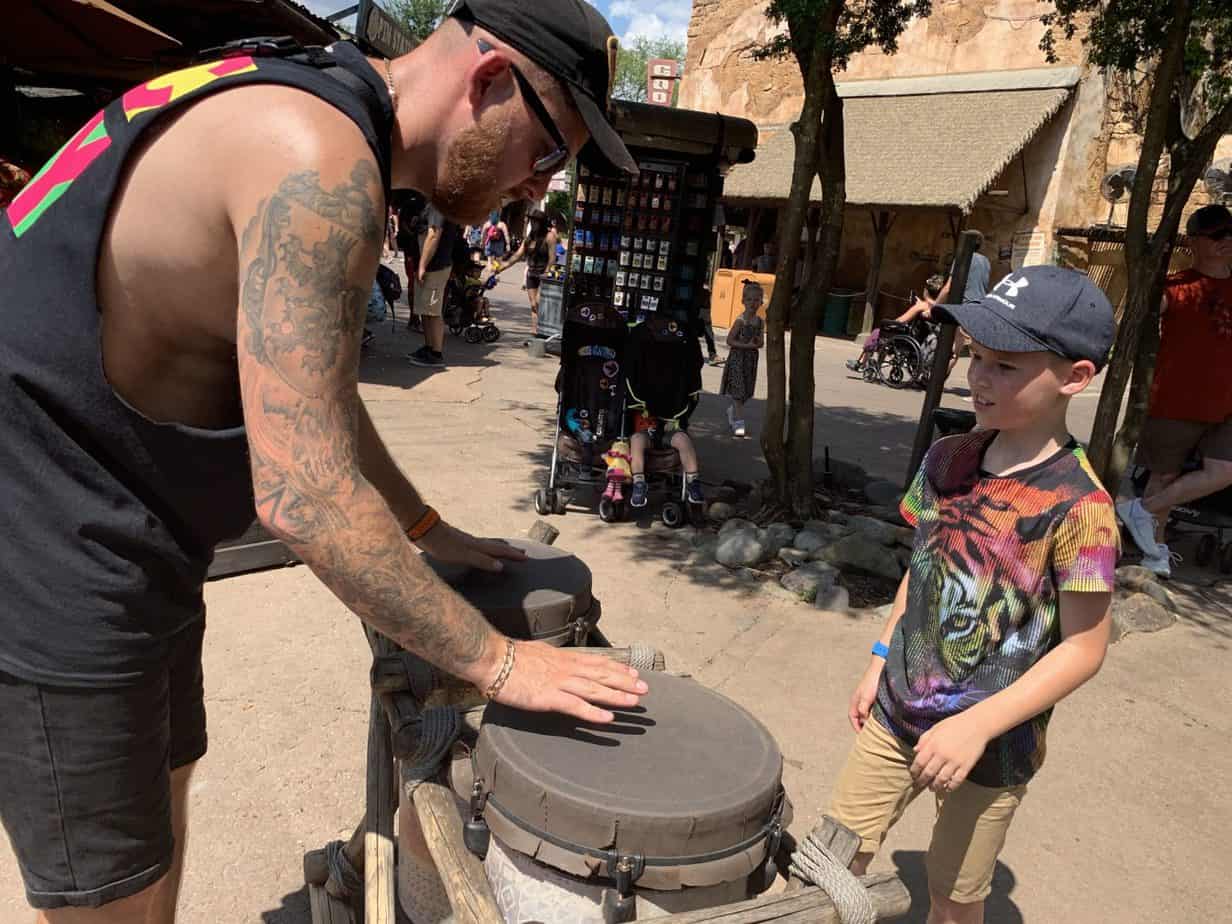 Our lunch reservation was at 12.30pm and was at Tusker House.  This was a character dining experience meeting Donald, Daisy, Goofy and of course, the main man himself Mickey Mouse!  I was really looking forward to this restaurant as not only is it a buffet, but it is african/eastern themed and I had heard the food was delish!

Well, I wasn’t wrong.  The food was right up our street.  We love trying different cuisines and this place offered loads to choose from.  I went for an array of salads to start, with corn bread and whipped butter.  For main, I tried 2 curries, teriyaki beef, rice, grilled veg and beef off the carving station with a chimichurri  sauce. Wow – just incredible! 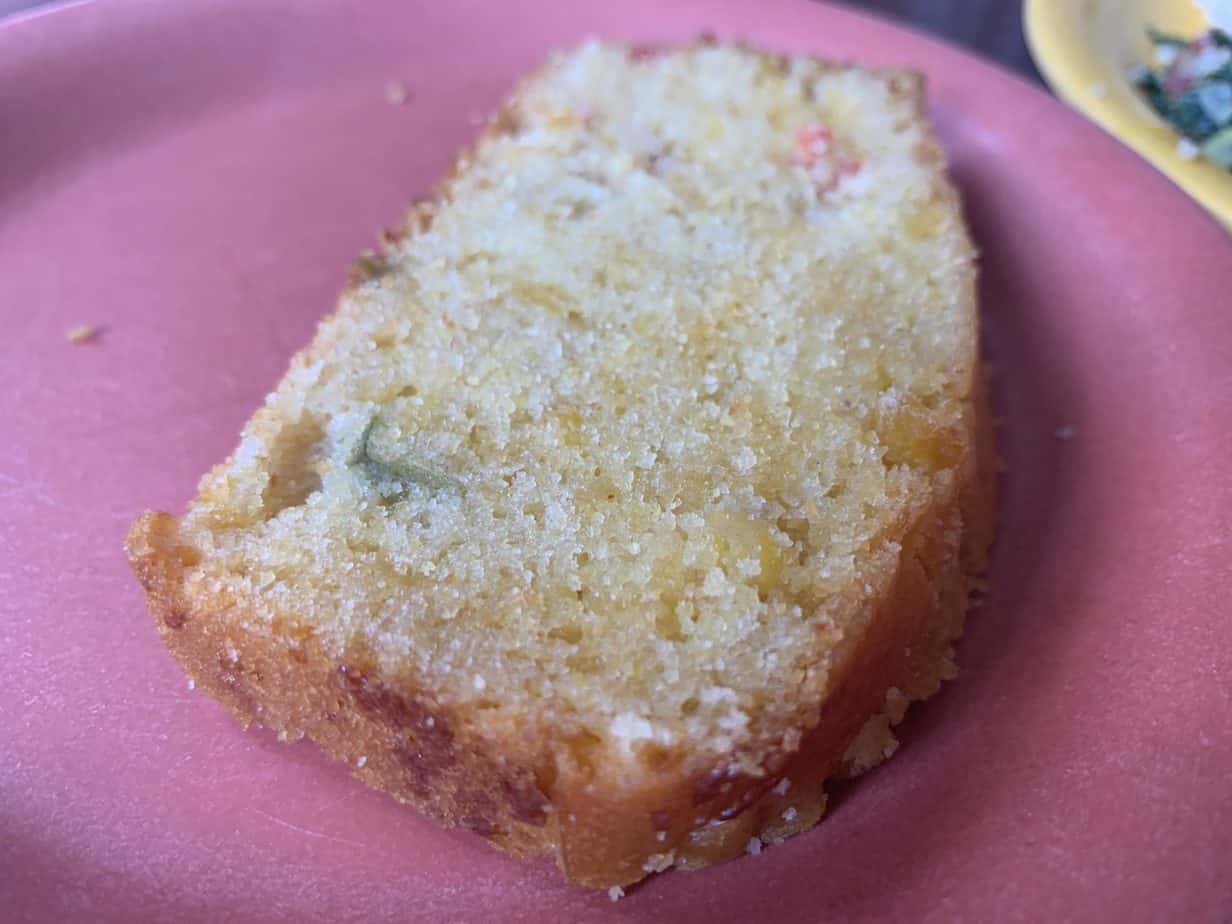 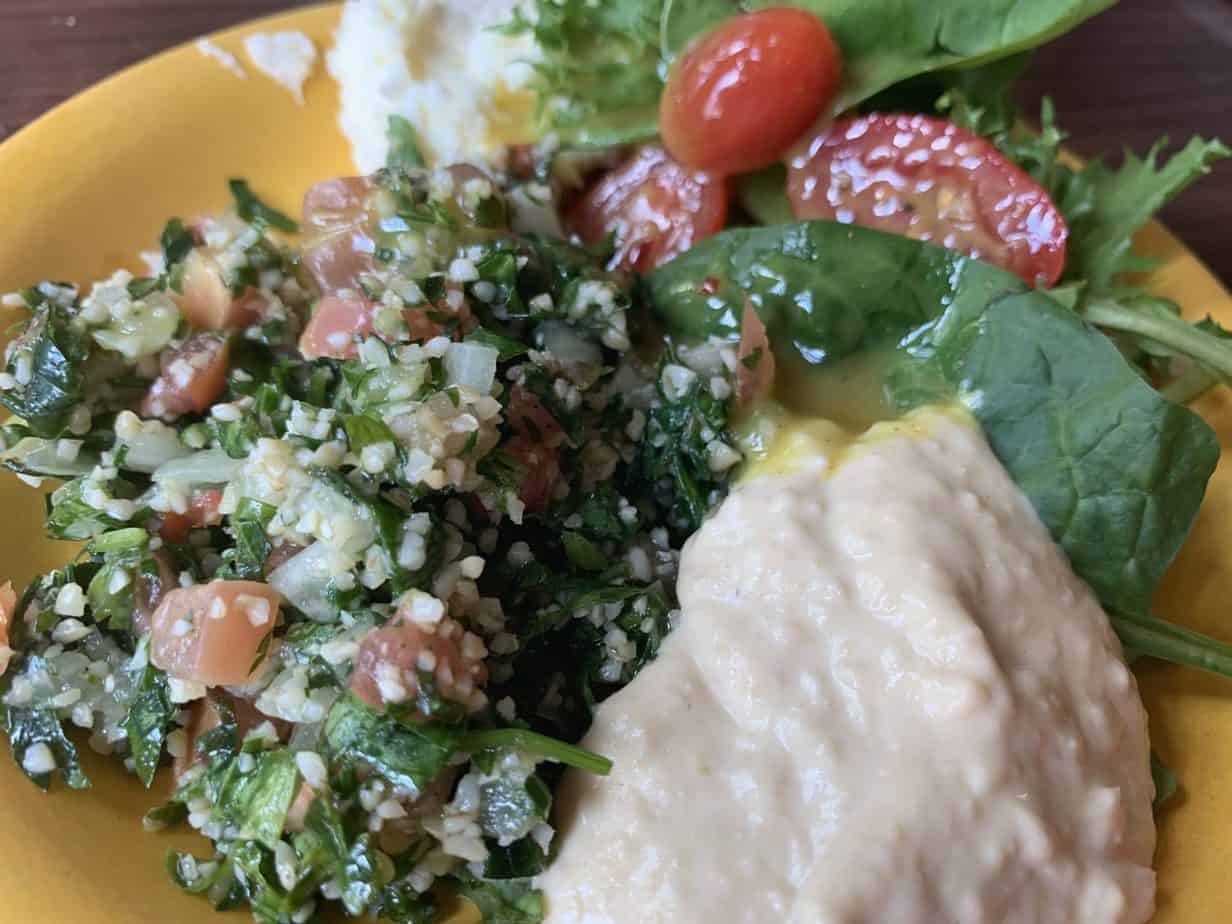 The kids enjoyed pitta, hummus and olives, cheese and grapes to start, and they opted for mini corn dogs, mac and cheese and sweetcorn for main.

We also got to meet all the characters  in their safari gear and Goofy even lead all the kids in the restaurant around, complete with maracas and dancing  – what an experience! 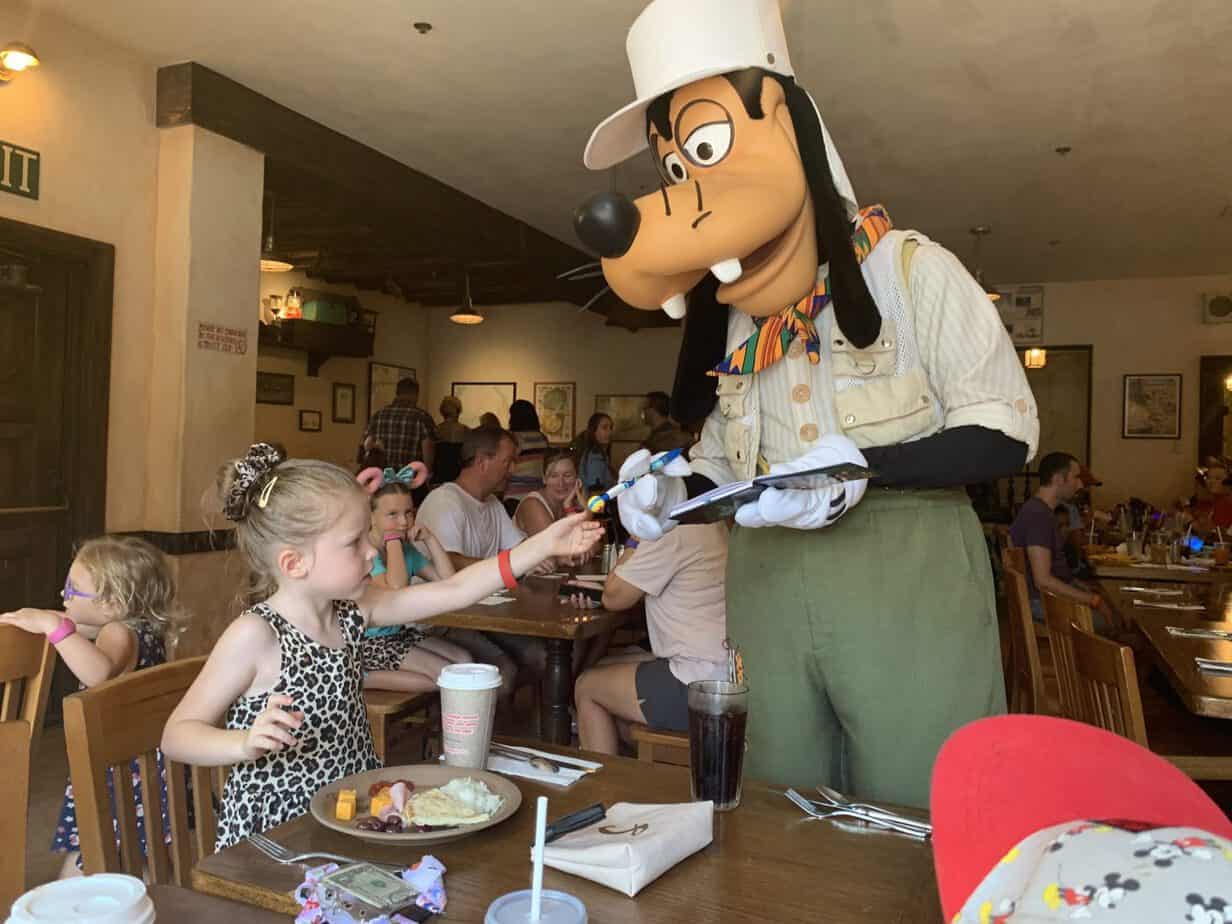 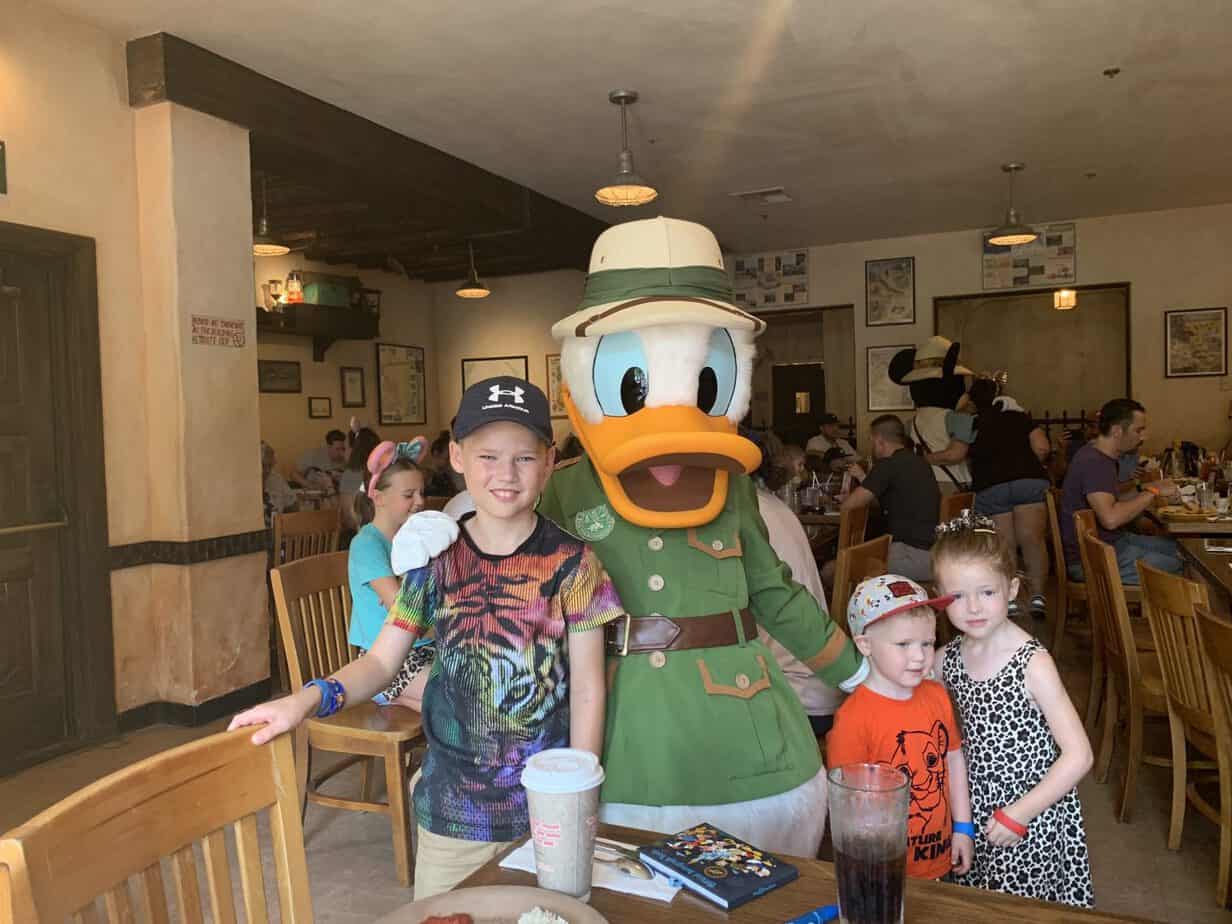 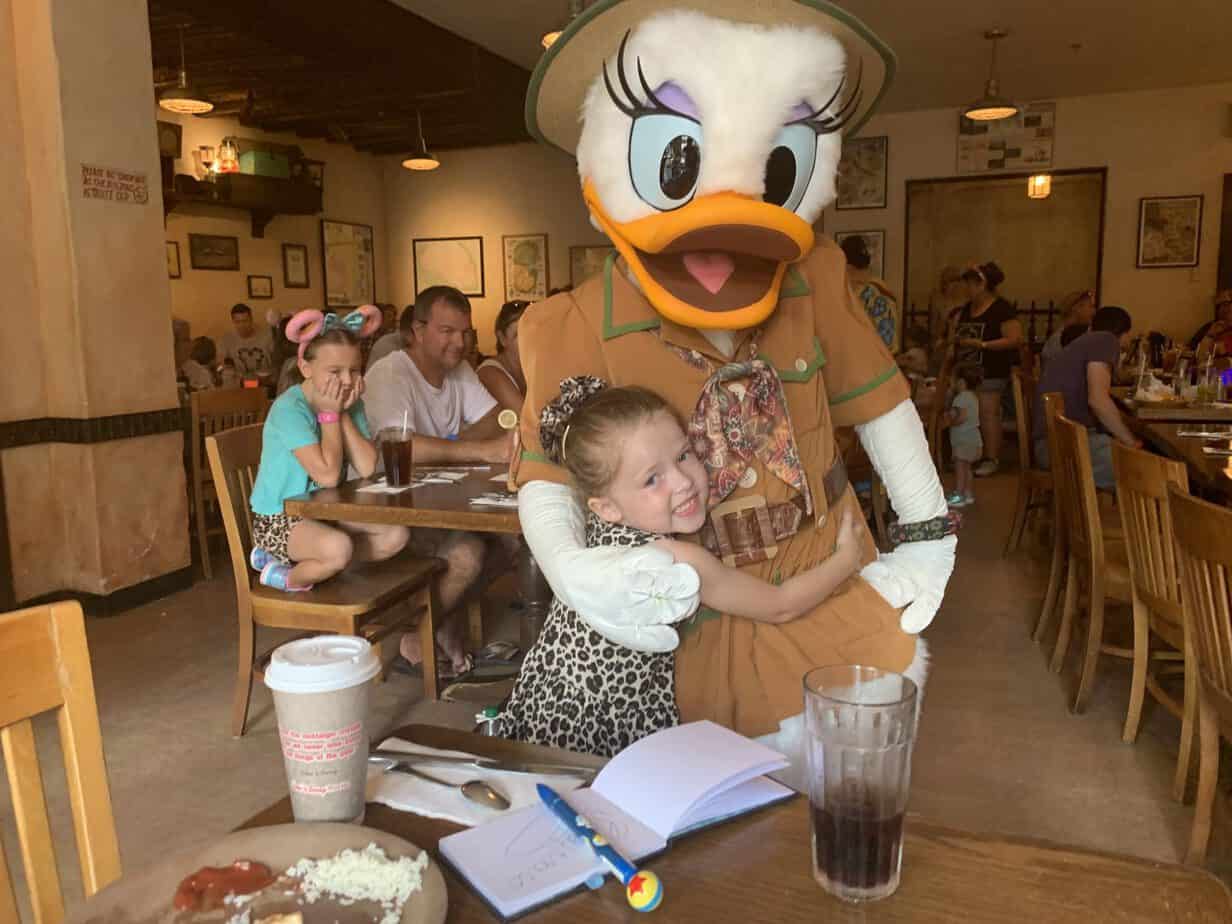 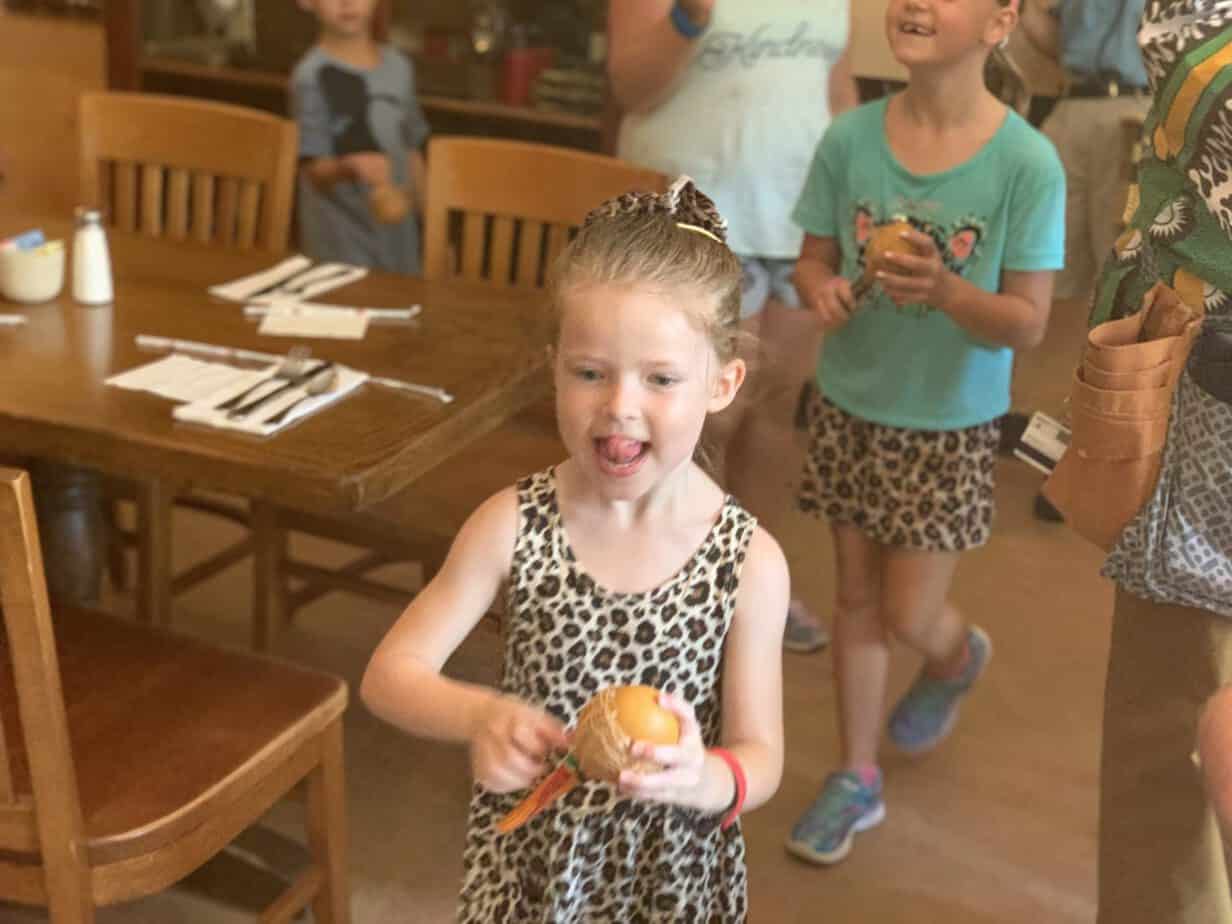 Before we left, we grabbed cookies and several other desserts off the buffet.  There was so much to choose from such as Magic Bars, Camerel Turtle brownies, strawberry mousse tarts plus more!

After our lovely lengthly lunch meeting the characters and filling our tummies, we then decided to head towards Pandora, stopping at a few stalls along the way and taking in the beautiful scenery. 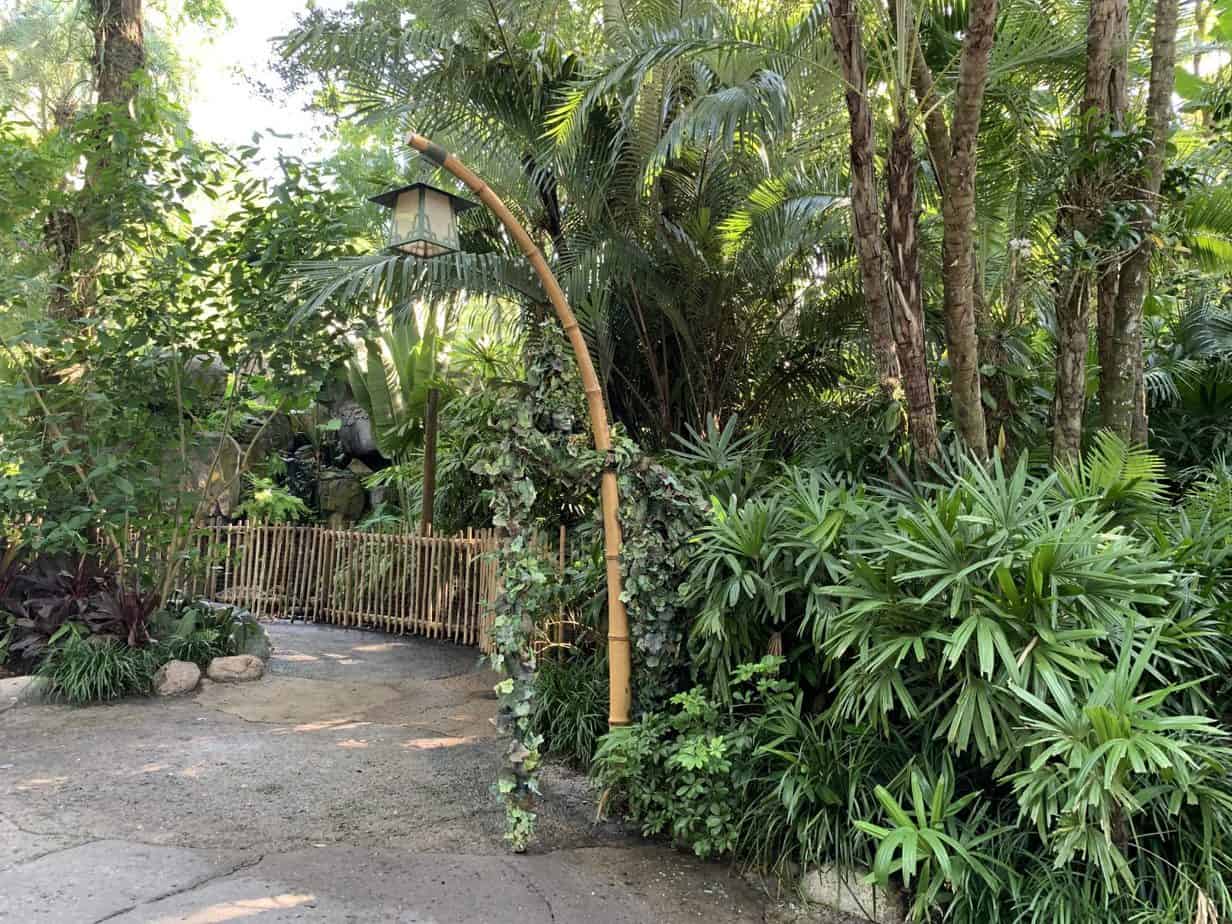 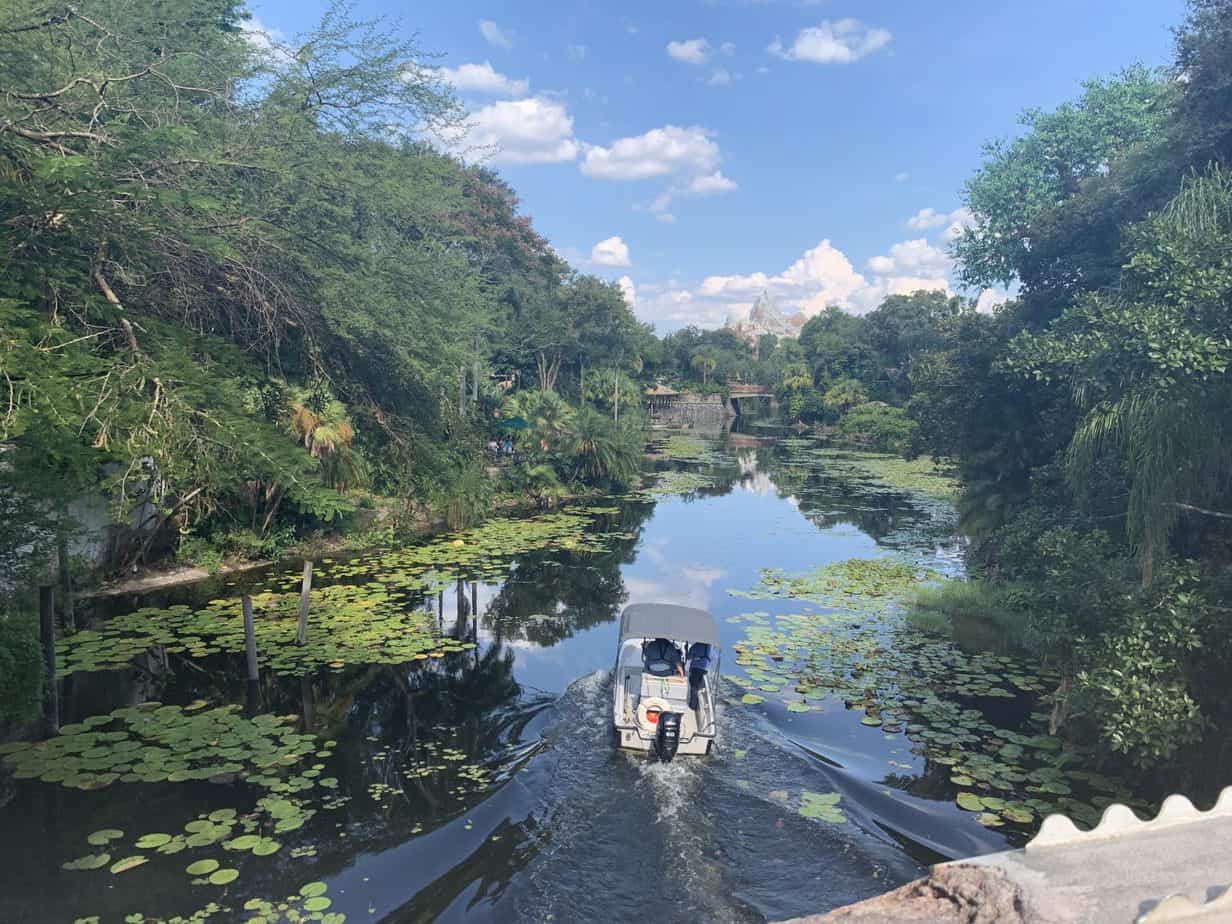 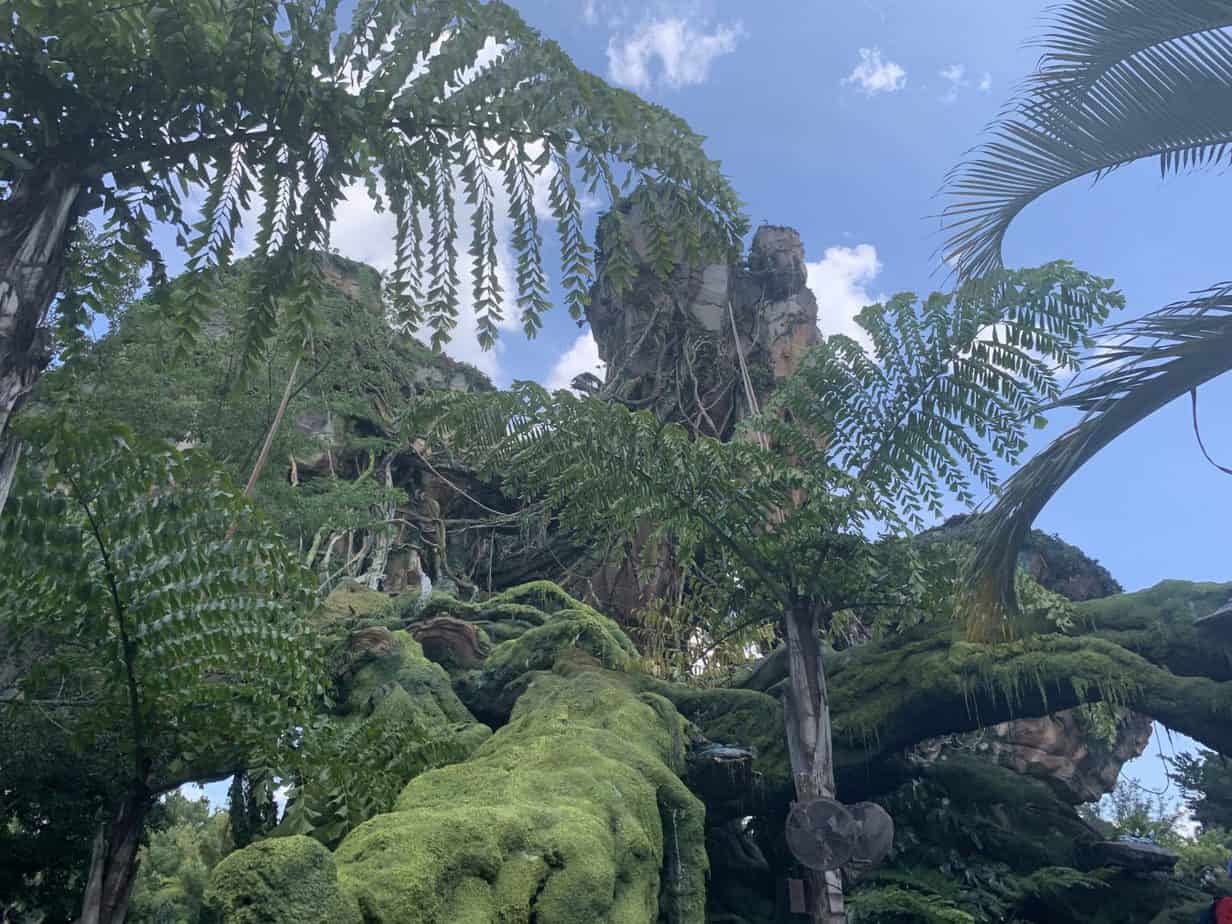 The world of Pandora is just insane and as we arrived, we were greeted with some street entertainment.  Its fully immersive and you are really made to feel like you are actually in Pandora.

I had to get myself the ever so famous ‘Midnight Blossom slush’.  This is a snack credit and is available at the Pongu Pongu stand which apparently stands for ‘Party Party’. The pink and green layers consist of limeade, apple and pear, topped with passionfruit boba balls. 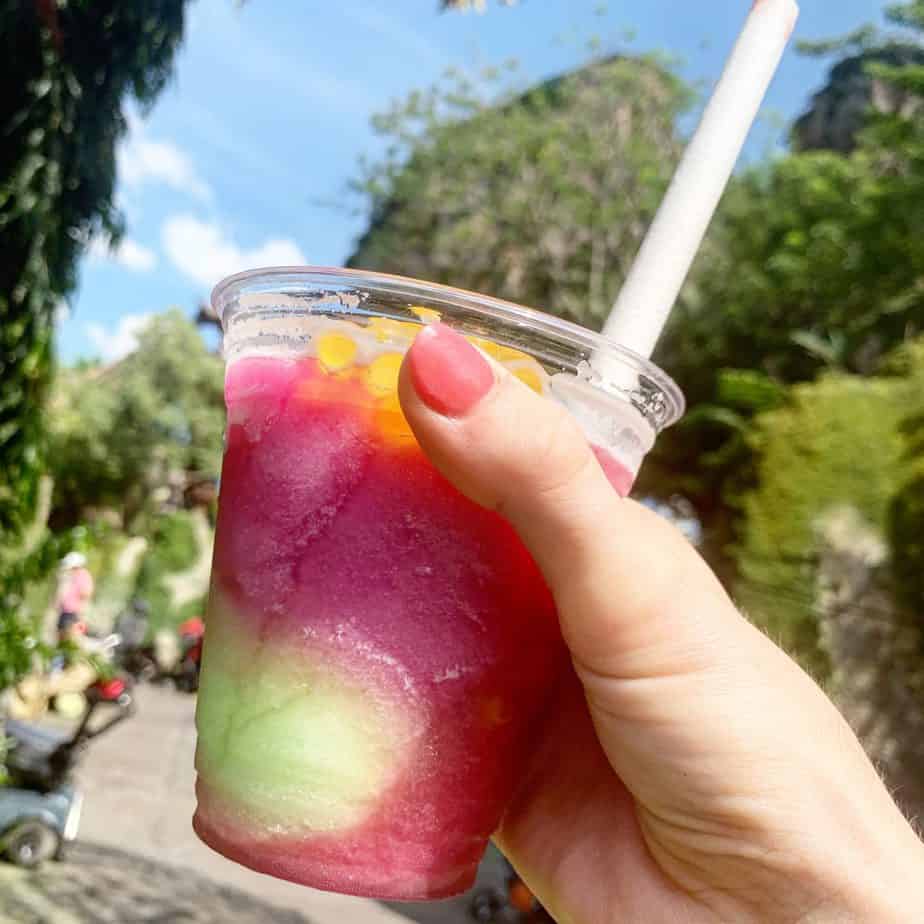 We had a fast pass for Flight of Passage, which I was so excited for.  I had heard incredible things about this ride and knew that Disney had stepped up a level when it came to it’s ride experience.  Mr B was the only kiddo tall enough to ride, so we grabbed a parent swap and I went first.

What a ride!  It’s absolutely incredible and I was shaking when I exited the ride – in a good way!  It basically is a simulator ride like no other, where you ride a Banshee and take a flight over Pandora, meeting various animals and creatures along the way.  It’s fully immersive with smells and even sprays of water, making the ride feel even more real.  The banshee actually breathes beneath you and the 4D screen is huge, detracting you away from even thinking your on a simulator.  IT.FEELS.SO.REAL.

After Matt and Mr B went on again (Mr B’s fave ride!) Missy then got her face painted and we brought a few souvenirs (well, toys of course!) 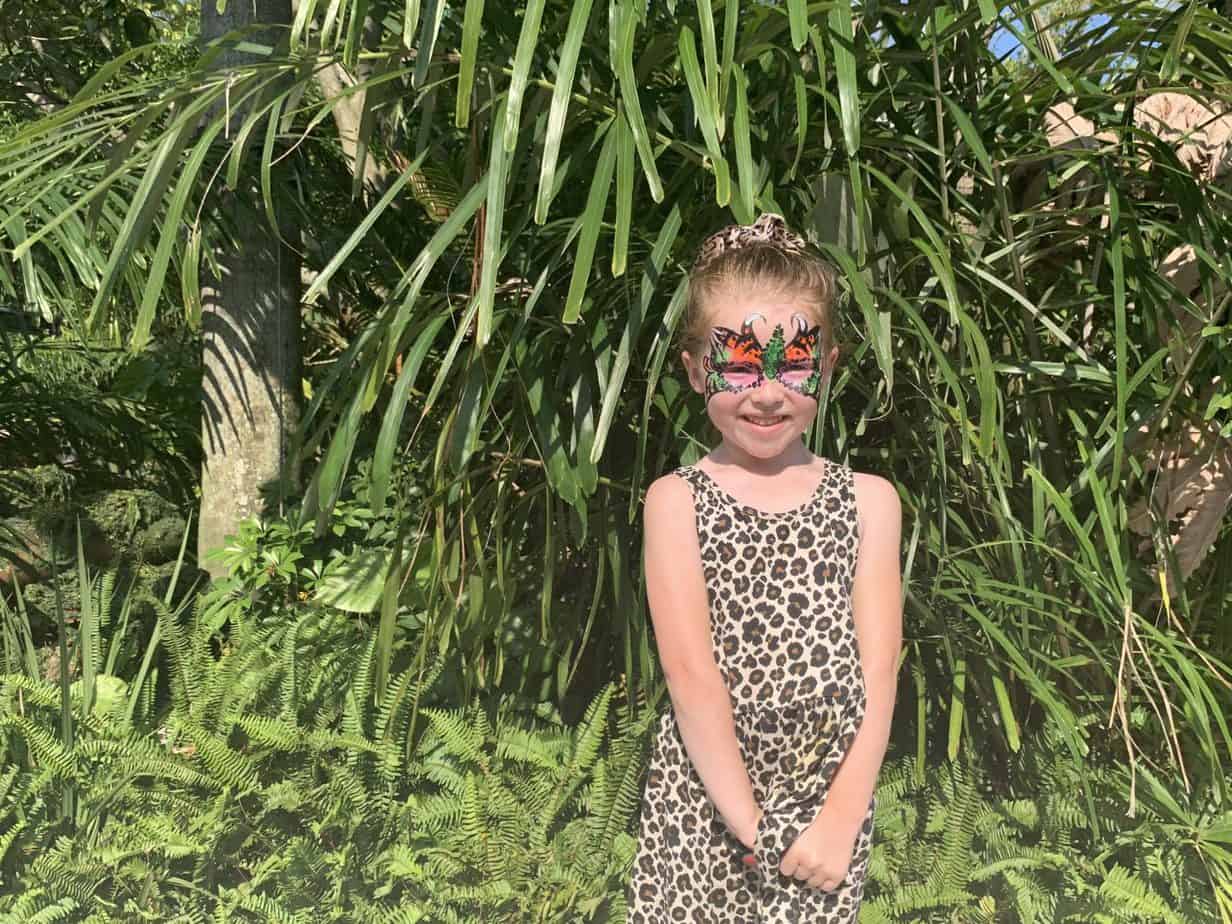 We had a 5pm fast pass for The Lion King show so we headed back over to Africa and entered the arena to watch the show.  This was incredible and was an amazing show full of acrobats, fire, floats, singing, dancing and audience participation!  The voices of the cast were beautiful and actually sounded like the voices from the film.  We all loved it.  (The show lasts for approx 30 minutes and is a shortened down version of the storyline from the film). 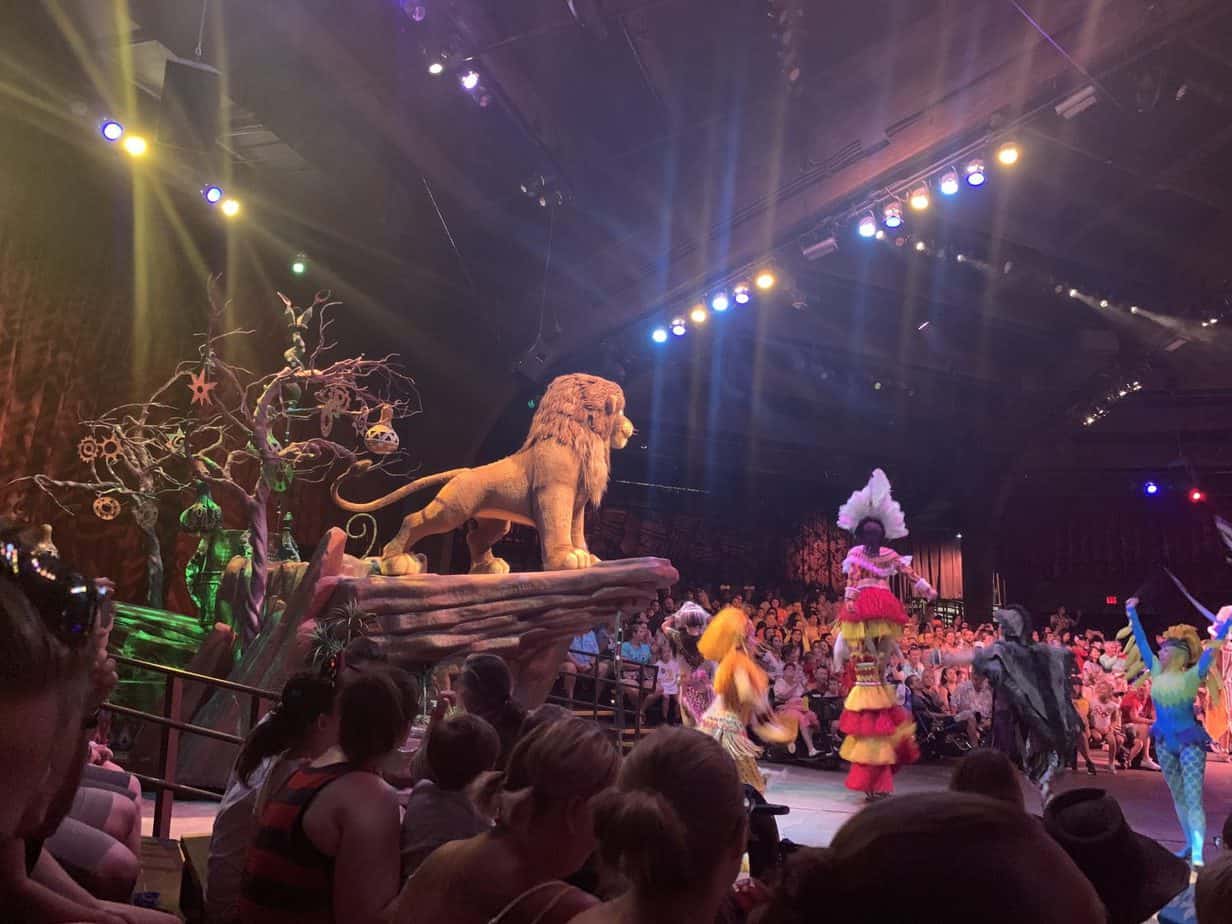 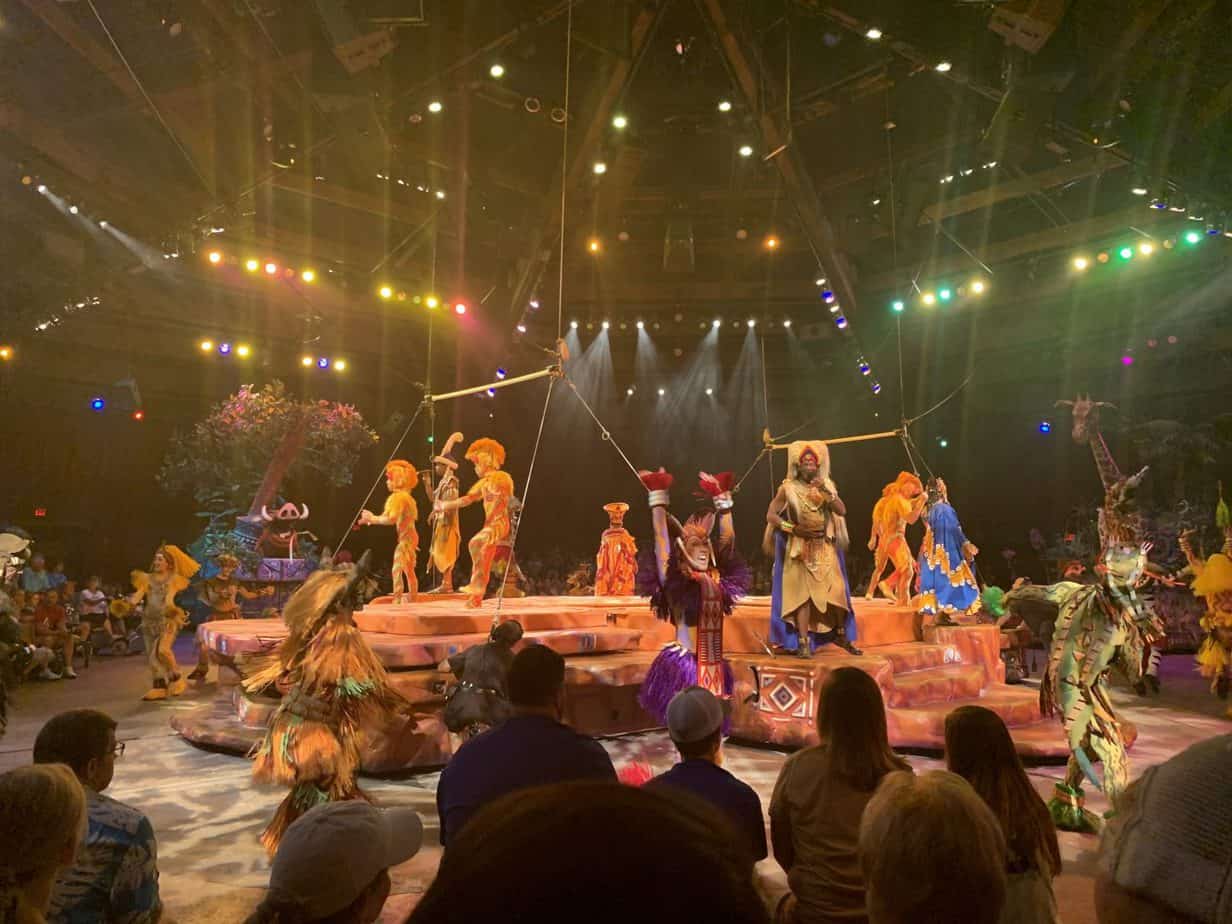 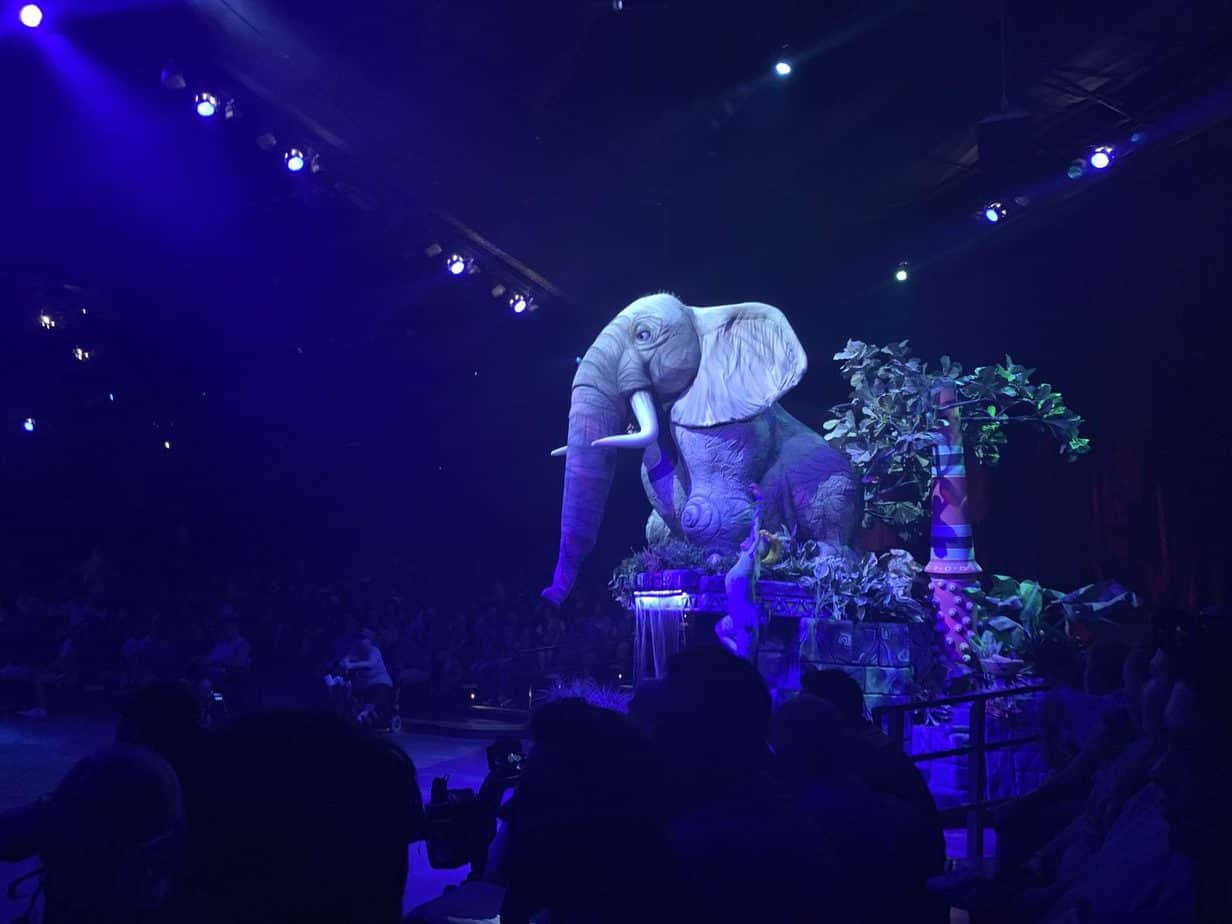 We finished off our time in Animal Kingdom with a further fast pass on ‘It’s tough to be a bug’, which is inside the Tree of Life and is a 4D show.  We then looked around some more shops and I brought my first spirit jersey (Lion King themed!)

Before we headed back to our resort, we grabbed some food from Flame Tree BBQ.  We had heard that the loaded fries were good from here, so Matt and I opted for these, whilst the kids each had hotdogs and fruit.  We left the park full, happy and excited to continue our adventures at Epcot tomorrow!

The Wonderful World of Disney on Ice…

Bedtime Stories with Bensons for Beds