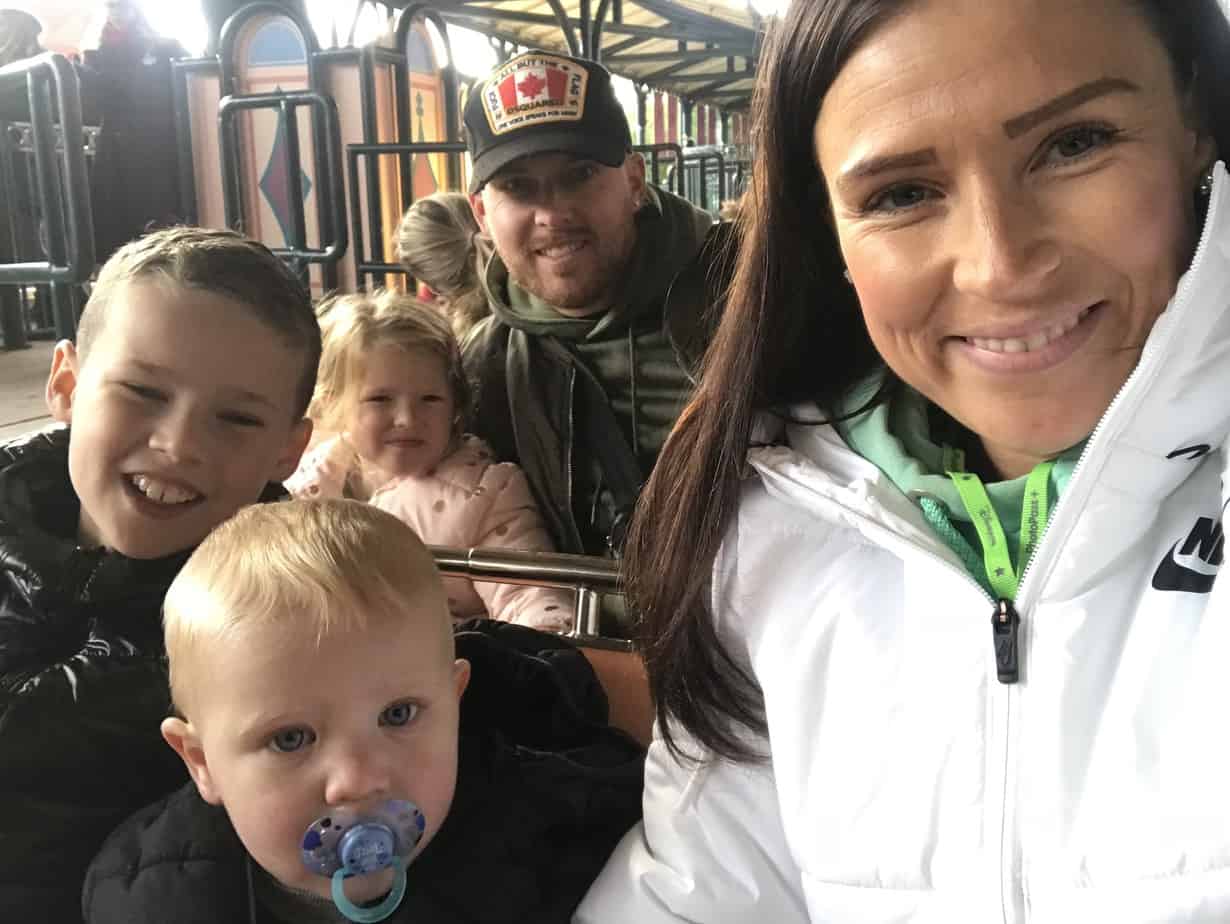 I am so excited to share with you our Disneyland Paris Trip Report!  On Monday 29th October we woke up to reveal our big surprise to the kids.  We had booked this holiday 6 months ago, and we had decided to keep it a secret from all of them.  I was pretty nervous about our reveal but as we woke up and took them downstairs, they had their Disney reveal box waiting for them.  I had filled it with all sorts of Disney goodies and on the bottom of the box I had printed ‘You are going to Disneyland Paris…Today! 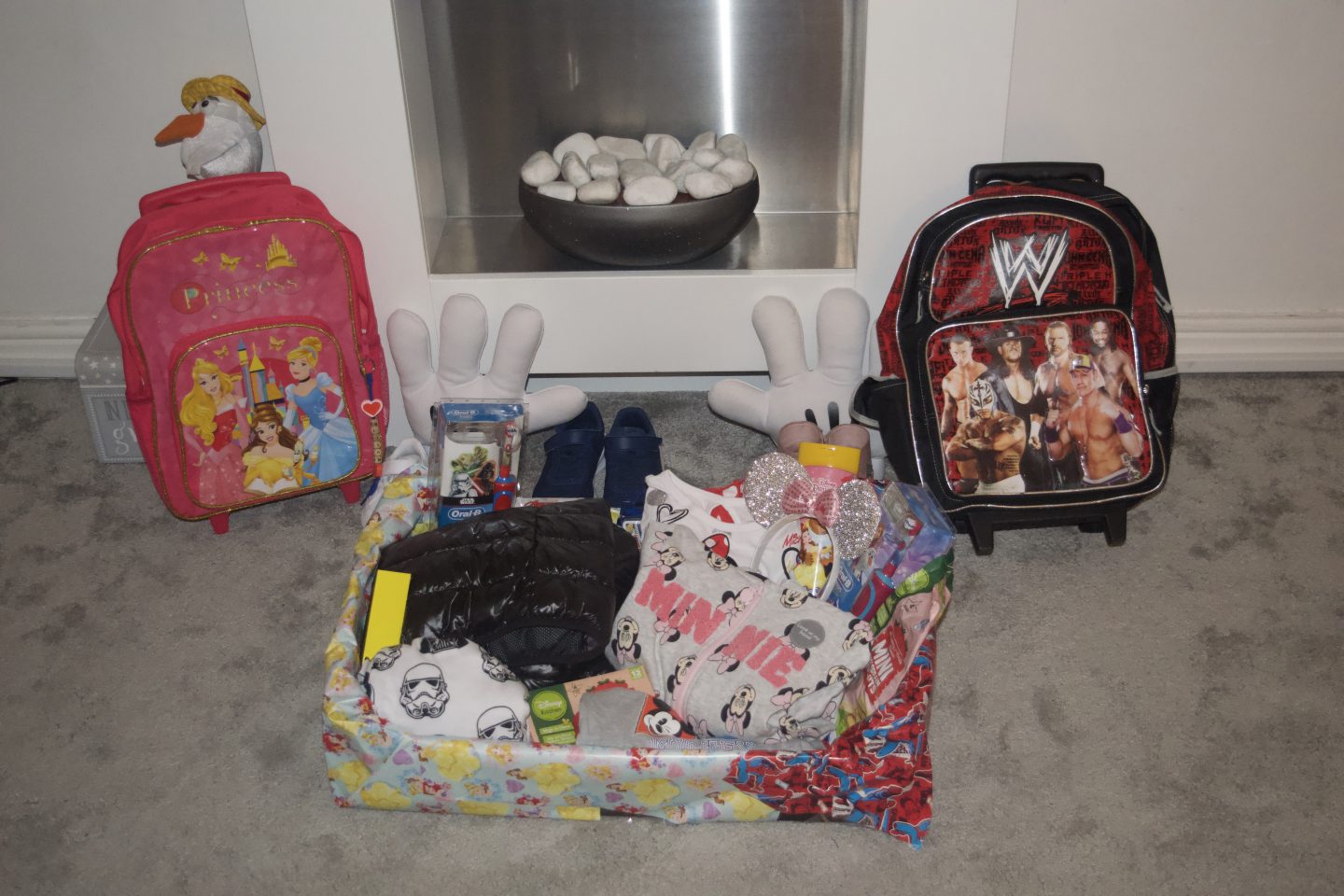 Which was technically a fib……

We were going the following day!  But our journey began that morning!  The kids were never dressed so fast!  And after the final packing and loading up the car (that’s such a parent thing to say isn’t it!) we were off to our first part of our holiday – Travel Inn Dover.  From our home, the journey was nearly 3 hours so we did decide to split our travel across two days.  I didn’t want it to feel like a rush and even though we wasn’t actually going to be in Disneyland until the following day, I wanted our trip to begin right there and then.  All the way down we played Disney music and the kids played games.  We generally had a smooth drive down with no stops and no tears or tantrums (ok, maybe a few) but Baby K slept for half of the journey.

I can always rely on a Travel Inn.  We had a spacious clean room and that was really all we needed for just one night.  We decided to have a late lunch in the adjoining restaurant which was very nice.  The kids were all excited and I knew we needed to get an early night for our 6am Euro Tunnel the next day.  The Travel Inn is literally 10 minutes drive away so we were nice and close.

And an early night we did yet!  All 5 of us were in bed at 8.30pm and fast asleep!  I couldn’t believe I had fallen asleep so early but we all obviously needed it.  I did keep waking up though (you know how you do as a kid on Christmas Eve – that was me!)

We’d set out alarm for 4.20am and quickly got ourselves ready and out the door at 5am.  The kids shot out of bed, so excited and were literally beaming from ear to ear despite the early time.  When travelling by Euro Tunnel, it is recommended you arrive 45 minutes before you board.  Prior to boarding, you have to go through passport control and security checks.  If busy, this can take time so I would stick with this recommendation.  As we were early and it was quiet, we managed to board the earlier train.  After some easy checks, we literally drove straight on with no waiting around.  However, there is a complex with a few eateries and toilets if you wish to purchase anything before you board. 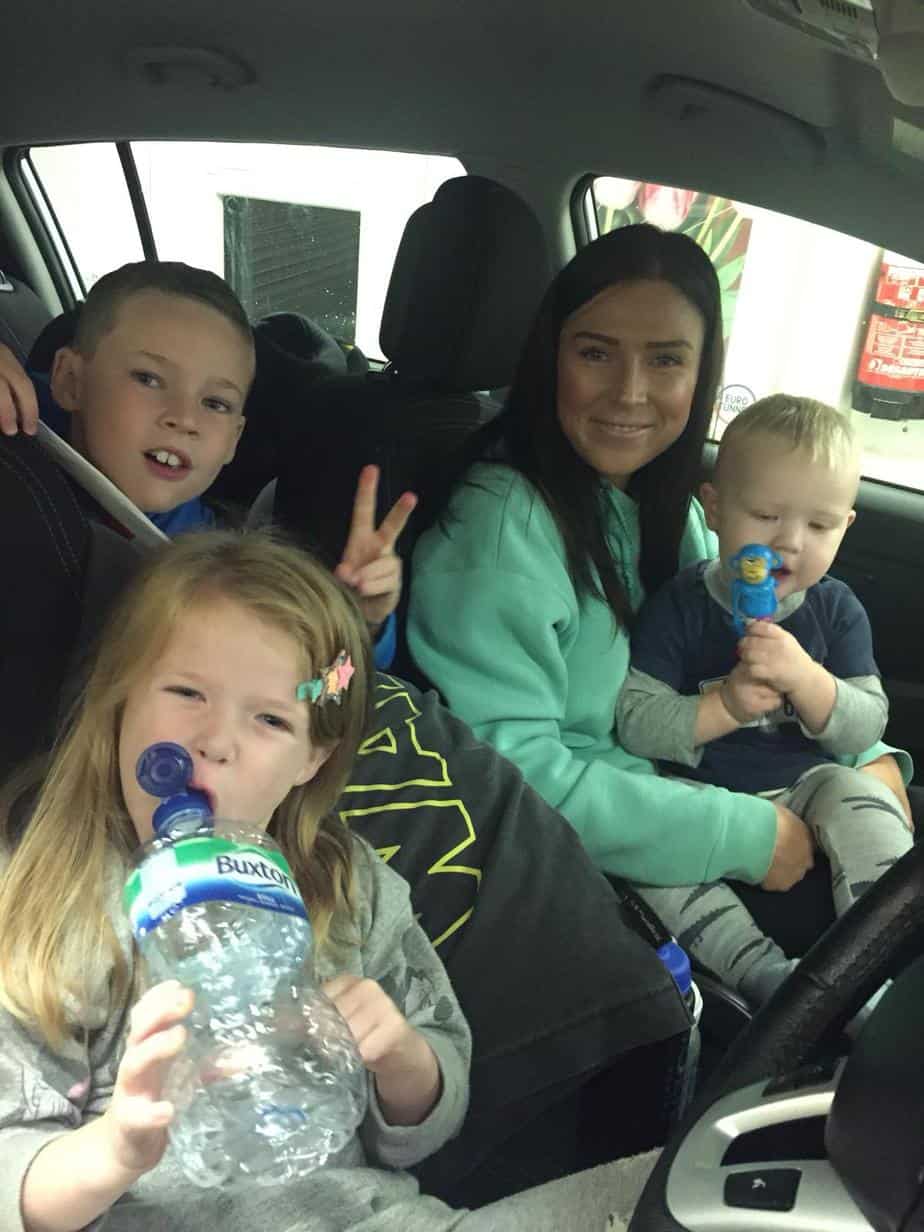 The Euro tunnel crossing literally takes 30 minutes.  We had no delays (unlike our crossing on the way home but more about that later) and before we knew it, we had started our last leg of our journey in France (don’t forget to turn your clocks forward 1 hour!)  We put Disneyland Paris into Google Maps Sat Nav which gave us two routes with about 10 minutes difference between the two.  We decided to take the shorter route and knew that this would involve a toll road costing around 22 Euros.

The traffic was a little busy at times and with this combined with one toilet stop, it took us a little longer than the 2 hours and 55 minutes it normally would take.  However, we arrived at our hotel at 11.15am and couldn’t believe we were here!!  We were so bloody excited and as this was a first time at the Sante Fe Hotel, I couldn’t wait to explore and check it all out.  We headed straight into the lobby and left our luggage in the car (one good thing about driving!)  Check in wasn’t too busy so I entertained the kids by taking them to the shop (where else!)  They were all so good in the car and I was pretty proud of them, so I said they could each have an item from the shop to choose.  I was also hit with the Disney happiness bug, and was just so happy to be there I was like, stuff it!

Check in was smooth and easy and the kids each got a Halloween badge to wear and a bag of sweets – love random acts of pixie dust!  We also got given our magic card which is a first for us.  This card acts not only as our room key but also for our park tickets, early magic hours pass, dining plan and to get coffee or tea from the machines located around the hotel.  I was so glad that we didn’t have to carry around all the paperwork like the last few trips.  The was so simple!

Our room wasn’t ready so we left all our luggage in the car (car is in the car park which is behind security gates) and off we went!  We decided to walk which if walking at a good pace, is around 8 minutes to the entrance of Disney Village.  You have to walk through Disney Village if you are walking from the hotels to get to the parks.  As it is our little tradition, we immediately headed towards RainForest Cafe for our lunch.  We love this restaurant as it is so fun for the kids.  Huge animatronic animals on the walls and ceilings and with the occasional thunder-storm, it actually feels like you are dining in a rainforest…well nearly. 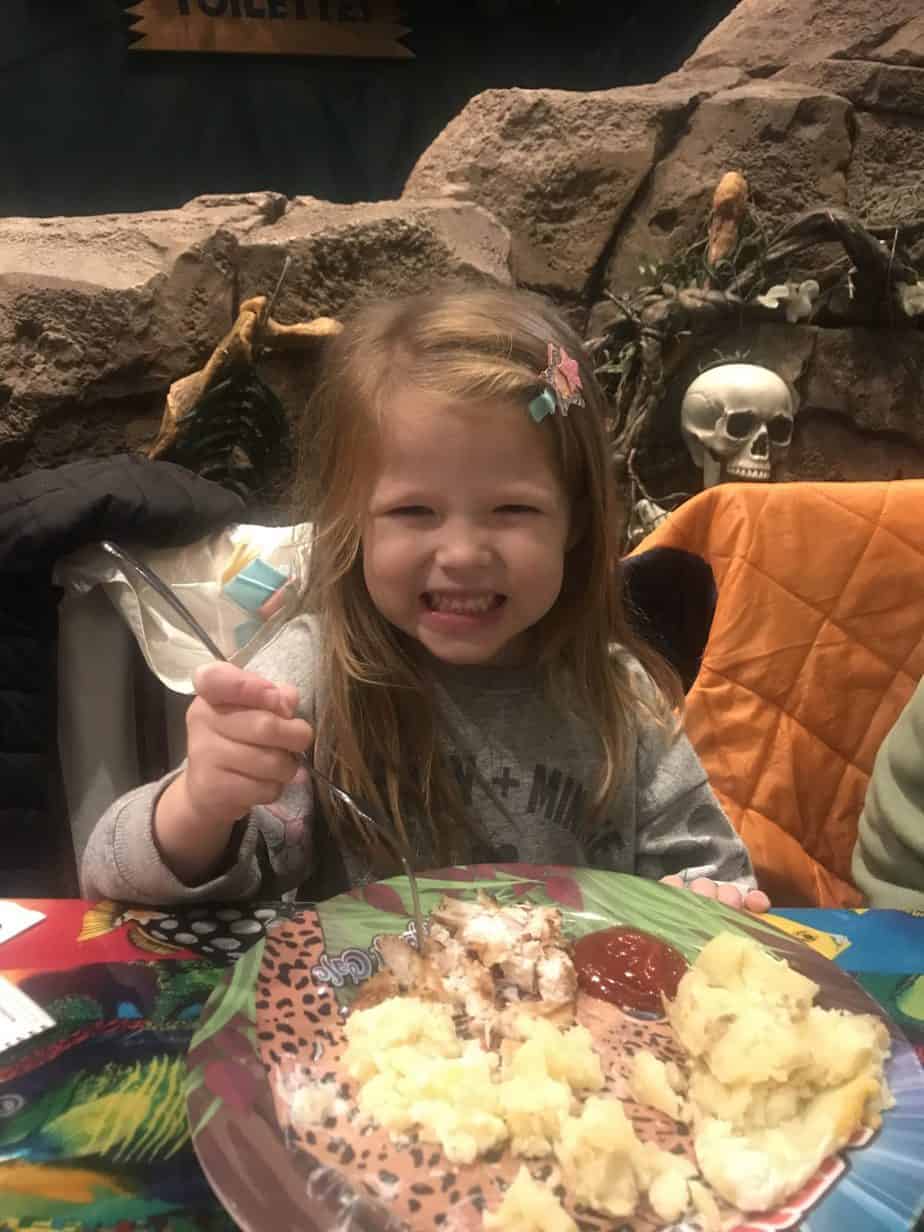 We enjoyed a delicious lunch of Quesadillas and Fries and Mr B had Spaghetti whilst the younger two shared Chicken fillet and jacket potato.  The price for the children’s deal which also includes a drink and a dessert is 15 Euros.  With two children’s meals, 1 beer, 1 diet coke and 2 starters and 2 fries it cost near enough 70 euros.  It is quite expensive but the theming makes up for it – and the aquarium! 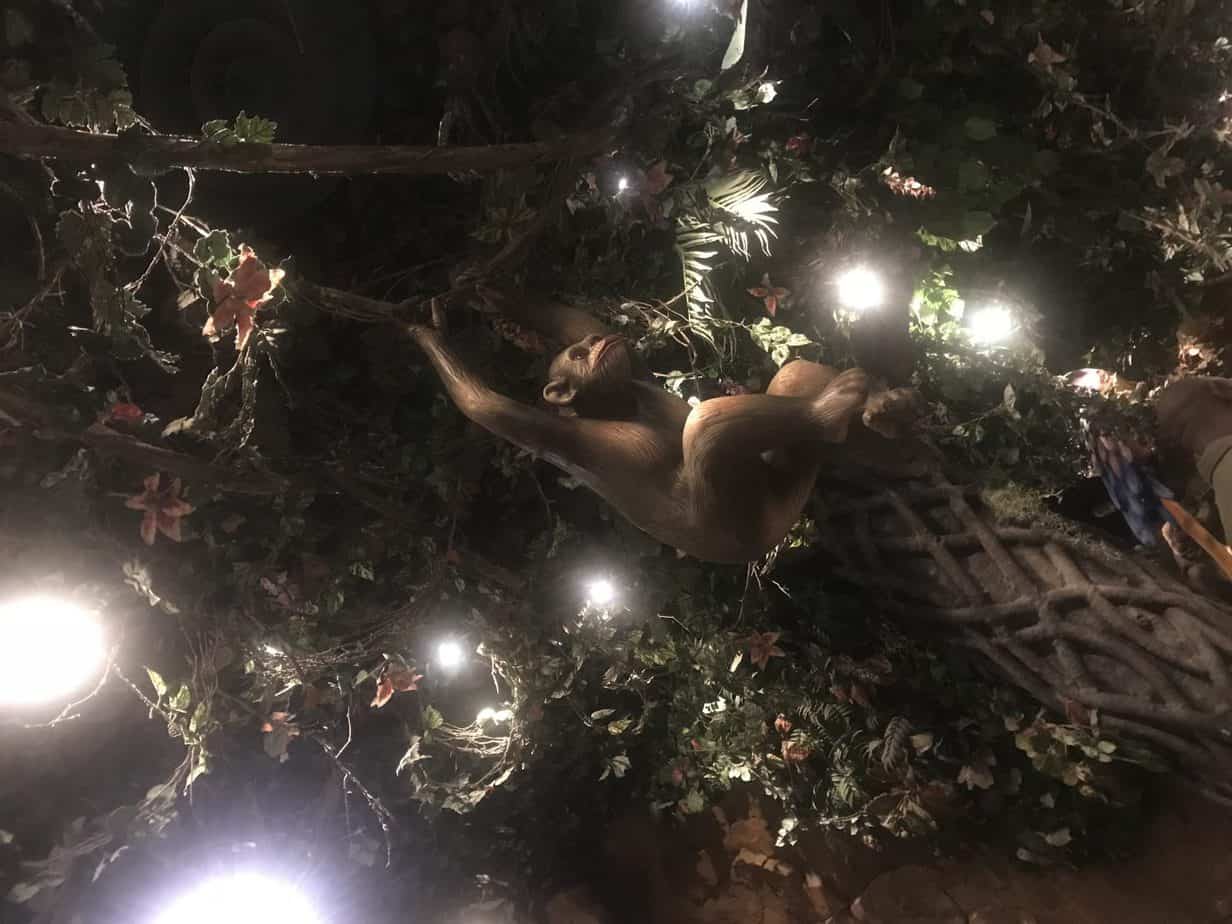 Around 2pm with full tummies and excited vibes, we headed to Disneyland park.  I literally couldn’t believe we were here!  As we walked into the park, the Halloween Cavalcade was just about to start.  We managed to squeeze into a space right at the beginning of the parade and it was a lovely way to get all Halloween excited!  We then walked down Main Street (which I literally skipped down and cried!) and Mr B told me off for being an embarrassing Mama!  Disney really does that to you though! 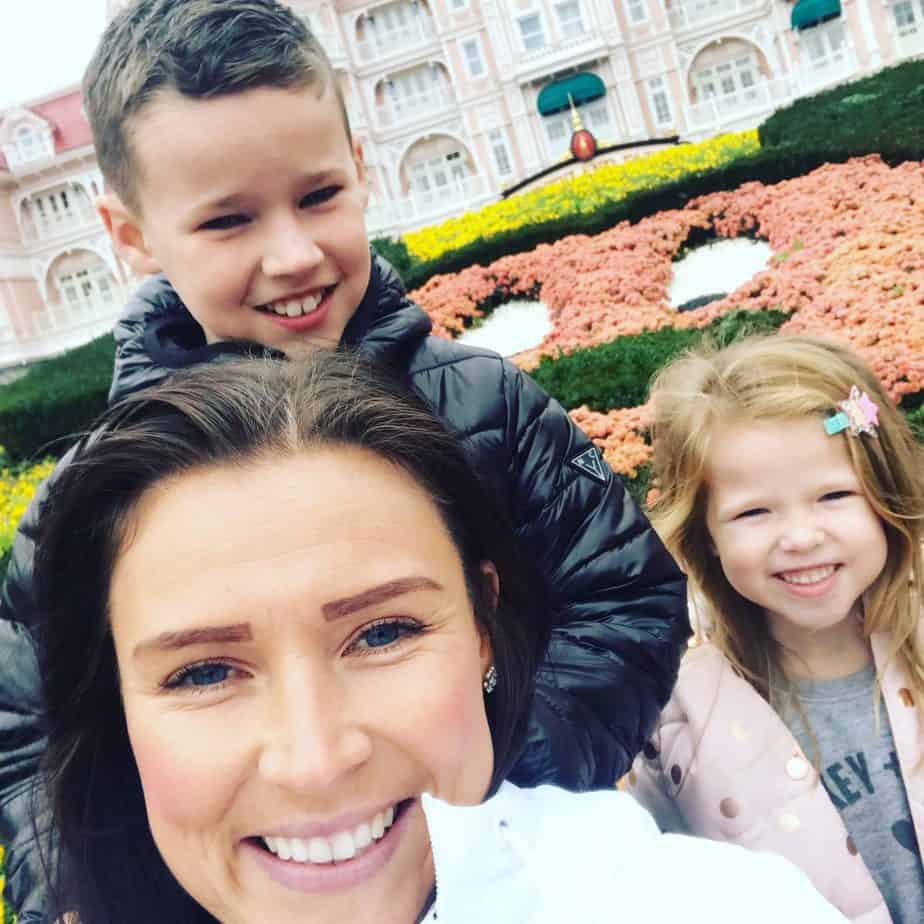 So hoary to be here at Disneyland Paris 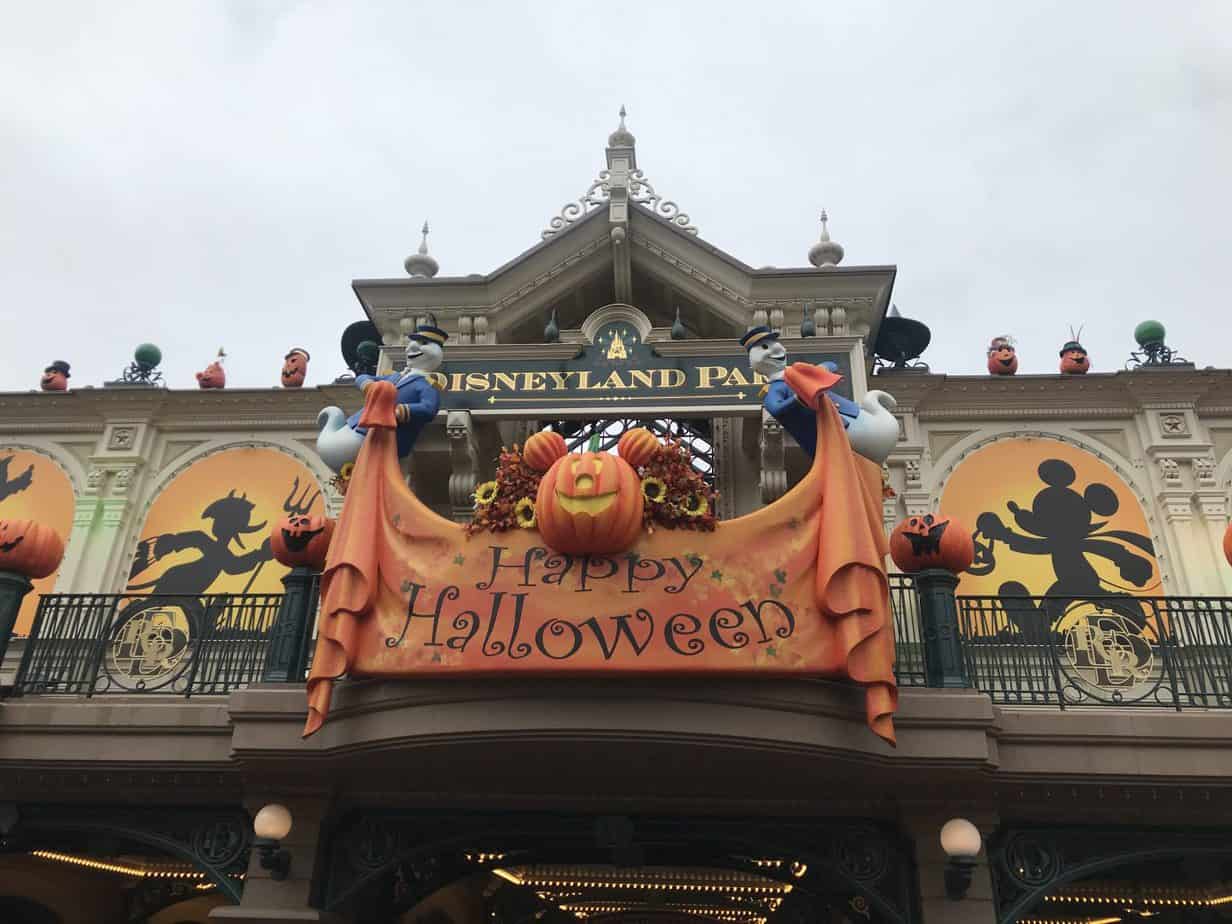 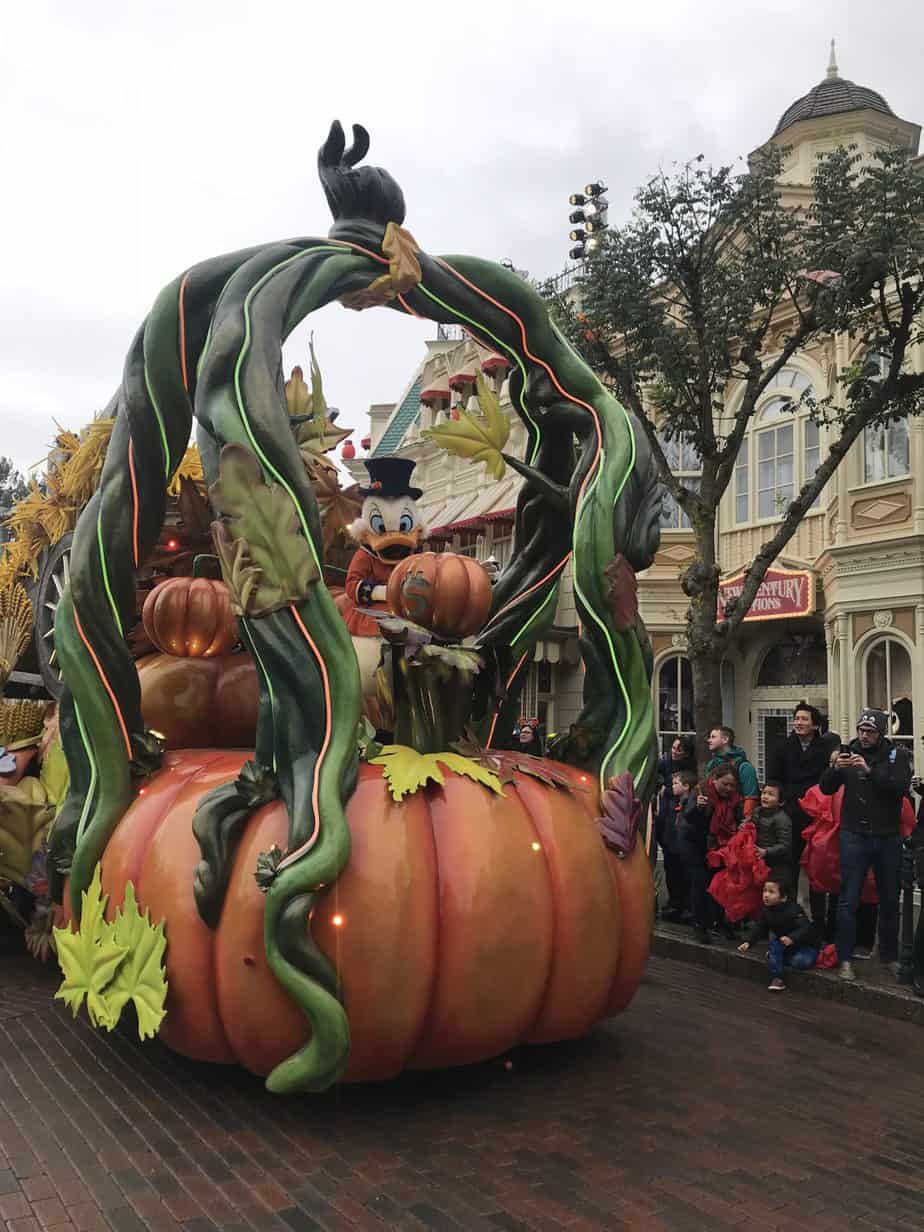 Our first ride of our trip was Autopia (chosen by Mr B) in Discovery Land, and what was even better was that Baby K was now tall enough to ride with us.  If you haven’t already been to Disneyland Paris then you may not know that Autopia is a car ride where you drive the cars along a track.  It’s very tame but very fun and great for all the family. 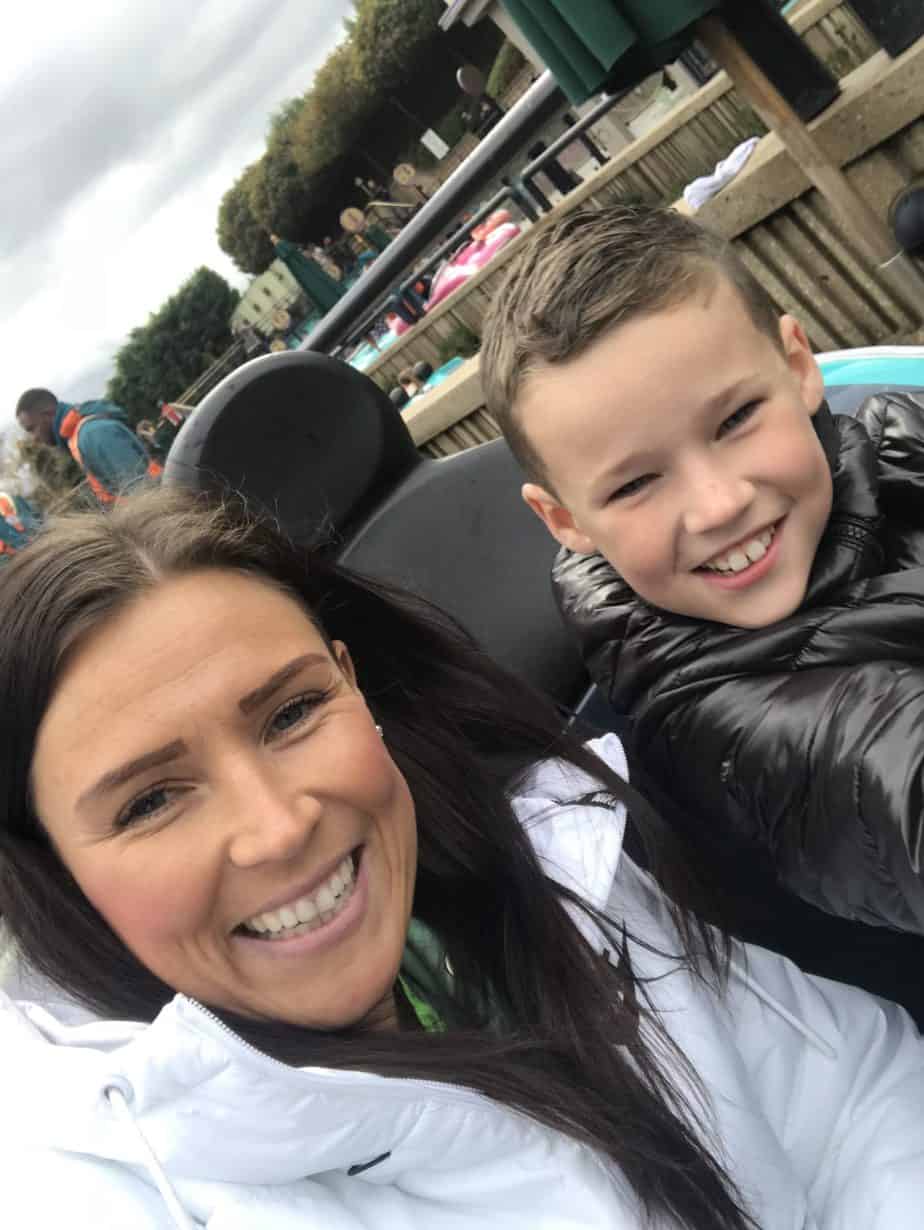 As Mr B had chosen the first ride, Miss W then chose the second and surprise surprise she chose Its a Small World, a lovely boat ride travelling through the lands of different countries. Small World is in Fantasy land which is situated behind Sleeping Beauty’s castle.  You can either walk through the castle or either side around it. 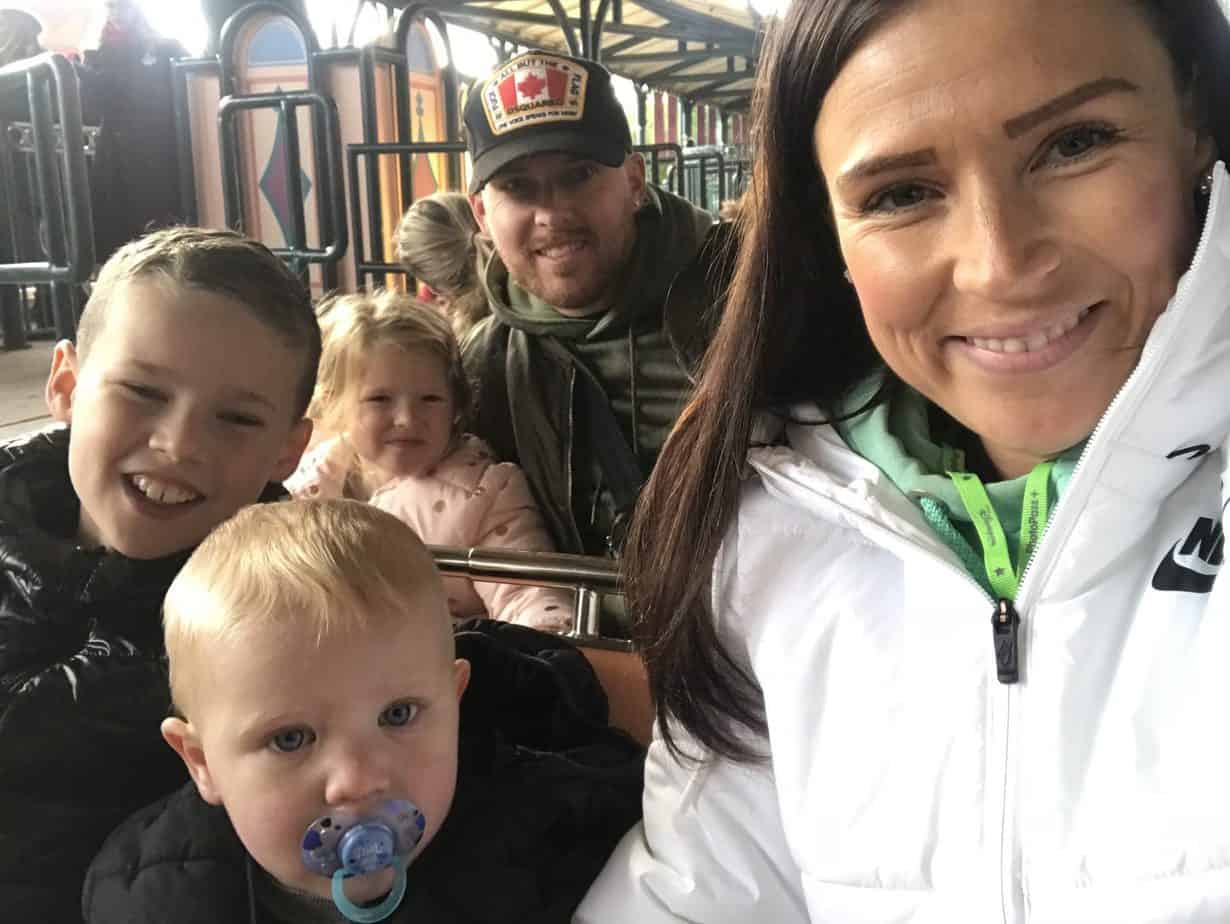 With the younger two seeming pretty tired, they napped in the pushchair whilst we then walked back to Discovery Land and onto Star Tours, which only had a 15 minute wait.  Matt stayed with the sleeping babes whilst Mr B and I went on this Star Wars simulator. As many of the rides have baby switch/parent swap, Matt was then able to ride with B immediately after.  With Star Tours, you enter via the Fast pass route after getting your switch card from a member of staff.  We then wandered around the Star Wars shop (where you can build your own R2D2’s and create lightsabers.)

A couple of hours had now passed so we decided to walk back taking in the sights and heading into a few shops on our way back to our hotel.  It was now past 3pm so we could have access to our room.  Which was fab!  Spacious, clean and great theming on cars, I was happy this would be our home for the rest of the week.  I unpacked (who else!) and we chilled out for a little before heading to dinner at La Cantina – a Mexican buffet restaurant within the hotel.  This was a pretty huge restaurant that was very busy and really, we did just want to grab something to eat.  With the standard dining plan you get all you can eat plus 1 soft drink each, however there is a bar to order alcohol or additional drinks.  The food was fine here (the honey pork was incredible though) but it did feel rather canteen like in here with lots of noise and people!  We headed to the bar to grab a drink and the kids played with their new purchases and has a slush before we all retired to bed.

Stick around for my second instalment of my Disneyland Paris Trip report 2018 Day 3 and 4!!

Top 6 places to visit in Europe…

Comfortable footwear for family days out

PREVIOUS POST
"Desk essentials for kids"
NEXT POST
"Emily Brown and The Thing at Birmingham Hippodrome"
0 comments so far.